Anyone who has read my 6 month review has a sense of my love/hate feeling towards the Assads, especially Bashar.  Asma al Assad has been a backbone of this site since I published a half plagiarized post on dictator's wives in February.  Since then, hit's keep coming from GOOGLE on Asma al-Assad, one of the dictators wives, to the point that nearly one quarter of the the hits on this site have come to that single post.  Asma is a relatively pleasant western looking woman.  BUT HER HUSBAND IS A VIOLENT, MURDEROUS DICTATOR.  If she was a good woman, she'd kill him in his bed!  The newest outrage, Bashar's secret police kidnapped, tortured, murdered and disfigured a 13 year old boy:

Torture of the child martyr: 'Rebel', 13, shot, kneecapped and had genitals removed before being killed by Syria's sadistic regime 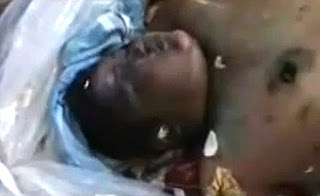 ...Hamza was picked up by security forces at a protest in Jiza, a village in the rebel province of Dar'a in Syria on April 29. For an agonising month, his desperate family waited for him to go home, terrified of what had become of him.

And when his broken body was finally returned, the injuries which disfigured almost every part of his flesh told the horrific story that he could not. Amid the mass of cigarette burns, the bullet wounds and bruises, it is impossible to know what finally killed him.

But it is perhaps unsuprising that Hamza, with his childish features and innocent smile, has become the most potent symbol of Syria's uprising. Thousands of protesters took to the country's bloodied streets this weekend chanting his name. Children demonstrated in Damascas while people clambered on the roofs in Aleppo to mark the 'Day of Hamza'...

Remember that, all you people coming looking for pictures of Asma!  This woman tolerates a man who is a stone cold killer.
Posted by Fritz at 9:44 PM