The Coolest Place in the Universe 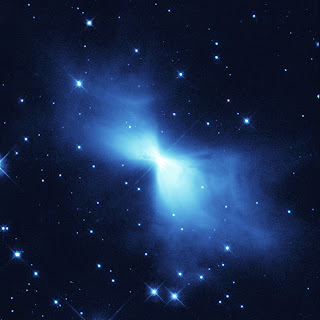 The Boomerang Nebula - the coolest place in the Universe?


The Boomerang Nebula is a young planetary nebula and the coldest object found in the Universe so far. The NASA/ESA Hubble Space Telescope image is yet another example of how Hubble's sharp eye reveals surprising details in celestial objects.

This NASA/ESA Hubble Space Telescope image shows a young planetary nebula known (rather curiously) as the Boomerang Nebula. It is in the constellation of Centaurus, 5000 light-years from Earth. Planetary nebulae form around a bright, central star when it expels gas in the last stages of its life.

The Boomerang Nebula is one of the Universe's peculiar places. In 1995, using the 15-metre Swedish ESO Submillimetre Telescope in Chile, astronomers Sahai and Nyman revealed that it is the coldest place in the Universe found so far. With a temperature of -272C, it is only 1 degree warmer than absolute zero (the lowest limit for all temperatures). Even the -270C background glow from the Big Bang is warmer than this nebula. It is the only object found so far that has a temperature lower than the background radiation.

Click the pick for a full screen view, or go to the Hubble site for the giant view.

It's probably being oversold, it might only be the coolest place in our galaxy; there are a lot more galaxies to check yet, but for only a degree to spare, they can't be much cooler.  So how did it get cool if it has a star (albeit a dying one) in the center?


The general bow-tie shape of the Boomerang appears to have been created by a very fierce 500 000 kilometre-per-hour wind blowing ultracold gas away from the dying central star. The star has been losing as much as one-thousandth of a solar mass of material per year for 1500 years. This is 10-100 times more than in other similar objects. The rapid expansion of the nebula has enabled it to become the coldest known region in the Universe.

Adiabatic cooling, just like making dry ice by opening a cylinder of CO2 and allowing it to expand.
Posted by Fritz at 6:00 AM

Email ThisBlogThis!Share to TwitterShare to FacebookShare to Pinterest
Labels: astronomy