Federal agents must abandon their vehicles and chase drug smugglers and illegal aliens on foot through 40 acres near the Mexican border because of a pond that is home to the endangered desert pupfish.

It’s part of the agreement between the Homeland Security and Interior departments on how best to protect the ecosystem, frustrating lawmakers who say it also prevents agents from conducting routine patrols.

And why do they have to get out of their trucks and tiptoe around the ponds?


U.S. Border Patrol (USBP) vehicles have been reported numerous times for driving over a berm that impounds the pond. “Driving on the berm could cause its partial collapse or deterioration,” according to a consultation document between the Border Patrol and the U.S. Fish and Wildlife Service (USFWS).

“If the integrity of the berm is compromised, much or all of the pond could be lost if the berm collapses. Even if the berm does not collapse, driving on it could cause deterioration, resulting in materials spilling into the pond, decreasing its volume, reducing habitat for pupfish, and requiring additional work to repair and reinforce it,” the document says. “These activities would likely result in mortality of pupfish and, at least temporarily, reduce the population."

The document also notes one incident when a border patrol agent drove an ATV over the channel several times. Although no damage was done, the Fish and Wildlife Service devised a scenario that could kill the fish. 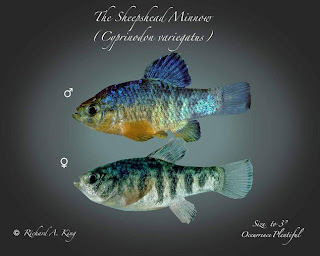 The Desert Pupfish  (Cyprinodon macularius) is a member of a widespread family of Cyprinodont fish that have adapted to a large number of isolated and easily threatened habitats.  There are about 120 different species of pupfish in ten genera (Knowing taxonomists, the exact numbers vary daily). They can tolerate a wide variety of environmental conditions including rapid changes in temperature and salt content of the water. They are also close relatives of a Chesapeake Bay fish the Sheepshead Minnow (Cyprinodon variegatus), perhaps better known as bait.


I don't really think it's worth altering the rules of engagement for drug smugglers and illegal immigrants for bait.

Found at The Other McCain's blog.