Movie Review - Pirates of the Caribbean!

Well, you know what you're going to get when you go see the third sequel of a popular series.  Johnny Depp as the Captain Jack Sparrow, a beautiful co-star as a sometimes foe, sometimes friend. In this version, Penelope Cruz did a good job of displaying her fiery Latin temper, and Capt. Jack gave her plenty of excuses.  Keith Richards did his bit (literally) as Capt. Jack's dad, and had the best line of the film:


"Does this face look like it's been to the fountain of youth?

Jack and Capt. Barbarossa, Jack's traditional foe, are forced into alliance against the Captain Edward Teach, the notorious Blackbeard of history.  Barbarossa has now transformed into a half sympathetic character like Jack himself, but in bad need of facial emollients.   Blackbeard, played by Ian McShane, was indeed a blood chilling foe, lacking all traces of humanity. An excellent villain, if you need someone to be more evil than both Captains Sparrow and Barbarossa.

The action was fast and furious, of course, the fight scenes full of apparent violations of a number of inconvenient physical laws, like Newton's, and at least two of the three Laws of Thermodynamics, not to mention a bit of overt magic here and there.  The scenery was gorgeous (I'll bet they had a big travel budget), and the CGI effects as good as you would expect of Disney.  The mermaids as a group were costumed poorly (not very realistically fishy, but nicely feminine).  The one mermaid character Syrena  (Astrid Berges-Frisbey, likely to return in the next episode as near as I can see) did good with a tough part, lying around looking sympathetic in a sexy outfit. 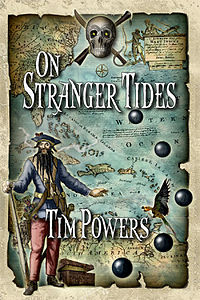 The plot of the movie seemed a bit darker than those of the past, but maybe that's just my memory.  I was surprised at the end to see that the movie was based on the fantasy novel "On Stranger Tides" by Tim Powers.  I dimly remember having reading this back a long time ago (it was written in 1987, I might have read it anytime after it came out in paperback).  From Wikipedia:

Most of Powers's novels are "secret histories": he uses actual, documented historical events featuring famous people, but shows another view of them in which occult or supernatural factors heavily influence the motivations and actions of the characters. Typically, Powers strictly adheres to established historical facts. He reads extensively on a given subject, and the plot develops as Powers notes inconsistencies, gaps and curious data; regarding his award-winning 2000 novel Declare, Powers stated,[2]


"I made it an ironclad rule that I could not change or disregard any of the recorded facts, nor rearrange any days of the calendar – and then I tried to figure out what momentous but unrecorded fact could explain them all."

IIRC, that seems correct, but the adaption had to be rather "loose" to get this movie out of the book.  It's OK though, the movie came out fine.  If you have a couple hours and a little money, this is a perfect summer movie to spend them on.
Posted by Fritz at 5:00 AM