The Hazards of Bird Watching 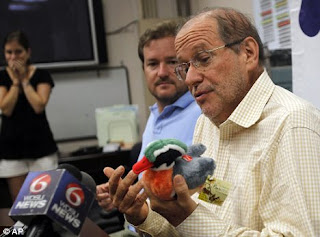 ‘I drank my own urine': University president describes how he survived for days lost in a swamp


A university president from Columbia got more than he bargained for while on a trip to the U.S. after he spent nearly five days lost in the Louisiana Bayou surviving on nothing more than plant stems to eat and
his own urine to drink.

Francisco Piedrahita,65, head of Universidad Icesi in Cali, Columbia, was at the Jean Lafitte National Historic Park near New Orleans and was walking along the park's Wood Duck Trail last Saturday to photograph the brightly coloured whistling ducks native to the swampy area when he had become lost.

He roughed it out for the next four days until a local sheriff's office helicopter spotted him...

According to the picture's caption: Francisco Piedrahita, a university professor from Colombia, holds a stuffed male wood duck as his son Esteban looks on...  That looks like a stuffed toy duck and not a stuffed real duck to me.  I wonder what that is all about?  Did someone give it to him as a joke?