Women find happy guys significantly less sexually attractive than swaggering or brooding men, according to a new University of British Columbia study that helps to explain the enduring allure of "bad boys" and other iconic gender types... In a series of studies, more than 1,000 adult participants rated the sexual attractiveness of hundreds of images of the opposite sex engaged in universal displays of happiness (broad smiles), pride (raised heads, puffed-up chests) and shame (lowered heads, averted eyes).

The study found that women were least attracted to smiling, happy men, preferring those who looked proud and powerful or moody and ashamed. In contrast, male participants were most sexually attracted to women who looked happy, and least attracted to women who appeared proud and confident. "It is important to remember that this study explored first-impressions of sexual attraction to images of the opposite sex," says Alec Beall, a UBC psychology graduate student and study co-author. "We were not asking participants if they thought these targets would make a good boyfriend or wife – we wanted their gut reactions on carnal, sexual attraction." He says previous studies have found positive emotional traits and a nice personality to be highly desirable in a relationship partners. 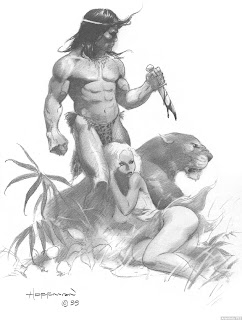 My suspicion is that women see moodiness as a sign that the man is dissatisfied with his lot in life, and is likely to strive to do better.  Women, who are notoriously bargain shoppers, probably perceive this as an opportunity to get in on the ground floor of something rising.  Happy guys who are showing signs of being satisfied with what they have are not a good bet, unless they're already bazillionaires, and there's not enough of them to go around.  Similarly, the swaggerers are demonstrating the confidence to get on with life. 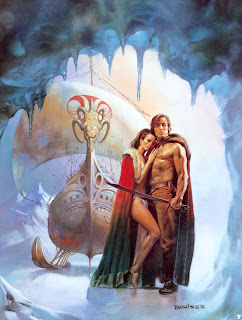 Not surprisingly, lots of fantasy art has images of submissive women being protected by brooding, or swaggering, or both dominant type men.  I know, it's fantasy, but it still appeals to something primal.  Women want to be protected and men want to protect them. 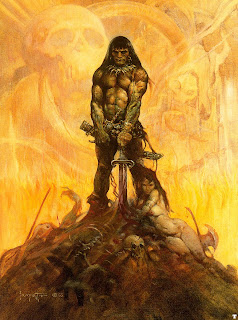 Conan, is of course, an arch-typical example of the brooding, swaggering hero, who is tremendously protective of women, and who, in turn, receives more than his fair share of their attentions. 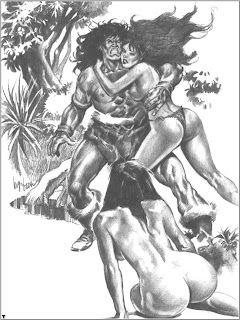 I don't understand quite why this one seems so upset, though.  Maybe he's gay.
Posted by Fritz at 9:43 PM