The Newds from New York 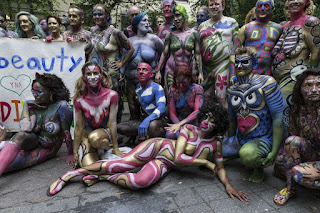 About 100 naked people gathered on Saturday to paint the town red — and blue, green, orange, magenta and neon yellow.

Dozens of artists used the naked bodies as canvases on the third annual NYC Bodypainting Day, which celebrates freedom of artistic expression and body acceptance. 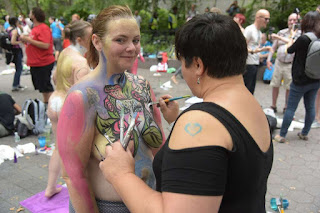 The volunteer models, including Charles Darius, doffed their duds in Manhattan's Dag Hammarskjold Plaza, outside the United Nations headquarters, for a few hours of painting before boarding double-decker buses and taking their art show throughout the city.

"I enjoy being nude," said Darius, whose parents are from Europe and took him to nude beaches often when he was a child. "It's a pleasure to indulge in that enjoyment on a sidewalk in Manhattan." 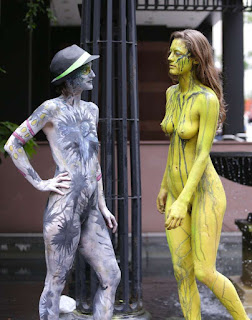 Turns out it's legal to go nude in New York, if you do it artfully.


Public nudity is legal in the city when it's for artistic purposes, such as a play, a performance or an art show. But Golub and model Zoe West were arrested in 2011 during a bodypainting project in Times Square. West sued over the arrest, and the city paid her a $15,000 settlement.

Golub said Bodypainting Day, which also takes place in Amsterdam and is scheduled for Brussels, makes "the world a better place" by benefiting everyone involved. He said the artists get to share their voices with the public, the models get to embrace their bodies and the public gets to appreciate all the types of people on display.

There are worse things to do on a hot day. How about going to see the all-female, naked production of The Tempest in Central Park? 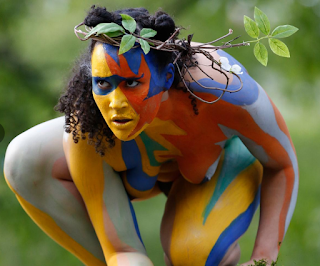 For an actor, reeling off endless lines of Shakespeare is a demanding job. Shouting it over the din of planes, helicopters and ambulance sirens whizzing past New York’s Central Park is even tougher. Doing it all naked however, in front of hundreds of onlookers – who would do that?

An all-female cast as it turns out. Made up of individual actors as well as members of the Outdoor Co-ed Topless Pulp Fiction Appreciation Society. They're currently performing their thoroughly modern version of The Tempest in Central Park. 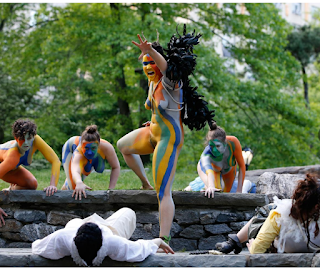 Surrounded by lush grass and green trees, while the audience settles itself on the ground and on benches at the iconic Summit Rock, a naked Miranda (Marisa Roper) is wandering around her supposed tropical island, picking up sticks and dropping them again.
. . .
Why naked? The company said not wearing clothes is about “body freedom and free expression”, and that those freedoms should not be taken for granted, even in a state so liberal that it has two democratic senators. 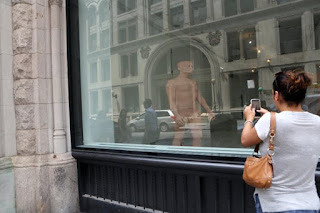 
A public display of some private parts has been turning heads in Gramercy Park.

CBS2’s Jessica Layton reported that riders heading into and coming out of the Gramercy Park subway station at Park Avenue South and 22nd Street are greeted by nude sculptures of men.

“I’m not prepared for that on a Monday,” one person said.

Another commented, “You know, for once, it’s not the body of a naked woman. 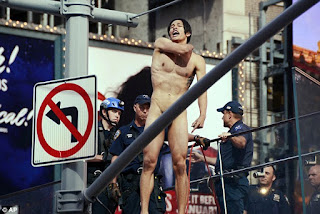 
A chiseled young model strutted around the Great White Way in his birthday suit Thursday — putting on an epic, hourlong peep show that brought traffic to a halt and had tourists fumbling for their cameras.

Krit McClean, 21, screamed out for Donald Trump as he evaded cops and pranced around the top of the red bleachers above the TKTS booth in Times Square before leaping down to street level.

There's just no doubt that The Donald drives liberals crazy.
Posted by Fritz at 6:00 AM