How Would Hoover Handle Clinton.com?

It’s abundantly clear that whatever enthusiasm existed inside the Bureau to seek Clinton’s prosecution evaporated once it became obvious that the White House would not support the FBI in EmailGate. The recent meeting between Attorney General Loretta Lynch and President Bill Clinton was an undisguised signal that, if she looked the other way, Lynch could continue as the nation’s top law enforcement official in January under Clinton. This is the stuff of banana republics, not law-based democracies. President Obama famously promised to “fundamentally transform” our country, and none can deny that he has delivered.
. . .
Hoover’s legacy is nothing if not complex. However, it’s abundantly clear that, were he still heading up the Bureau, he would not have been afraid of taking on the White House if he felt a matter warranted it. After all, he did so many times as the country’s secret police chief. It’s impossible to imagine Hoover concluding that Hillary Clinton broke the law but there’s nothing to be done about it.

It's not the first time the law has gone soft for Hillary: In email probe, echoes of another time prosecutors weighed charging Hillary Clinton with a crime


Majority Disapprove of Decision Not to Charge Clinton on Emails

A majority of Americans disapprove of the FBI's recommendation not to charge Hillary Clinton with a crime over her handling of email while secretary of state, and a similar number in a new ABC News/Washington Post poll say the issue leaves them worried about how she would handle her responsibilities as president if elected.

Most also say the email controversy won't affect their vote in the presidential election. But 28 percent say it leaves them less likely to support her, versus 10 percent who say it makes them more likely to do so.

Anyone for whom the email scandal makes them more likely to vote for Hillary should be ineligible to vote on grounds of idiocy. Voters Question Clinton's Qualifications, Now Rate Trump Equal. The Beast du Jour: Hillary Clinton Gets Away With Email Debacle. Good! Now Will She Learn?. Magic 8-Ball says NFW.

Pressure grows on Clinton aides to lose security clearances If any of them never work with national security information again, it will still be too soon.

Political Firestorm: The Clintons, the AG and the FBI and The Clinton Contamination. Everything she touches turns to shit, so let's elect her President!

Behind James Comey’s Big Gamble, and a fine rant by Rush Limbaugh: Comey Twists into Pretzels to Avoid a Critical Sound Bite of Hillary or Obama, as Race and Gender Silence Opposition


During a campaign visit to Kentucky this year former President Bill Clinton met with the leader of a racial hate group that has been implicated in Thursday’s attack that killed five Dallas police officers.

Mauricelm-Lei Millere is leader of the African American Defense League(AADL), which has repeatedly advocated violence against police. Dallas gunman Micah Xavier Johnson supported the AADL on Facebook, where Millere’s group posted messages that declared “ATTACK EVERYTHING IN BLUE EXCEPT THE MAIL MAN” and “sprinkle Pigs Blood” prior to Thursday’s attack. On his Instagram page, Millere wrote: “We have no alternative! We must kill white police officers across the country!”

The AADL leader’s meeting with former President Clinton during a May 3 visit to the University of Kentucky is featured on Millere’s Tumblr page, where a photo of Millere shaking hands with Clinton . . .

When are blacks going to wake up and realize the Democrats who run their cities are the real problem? Now imagine the furor if Donald Trump were to shake hands with a KKK leader . . .

NAFTA a sore spot for some Democrats on Clinton in Michigan. I believe in free trade, if it's fair. It's rarely fair. 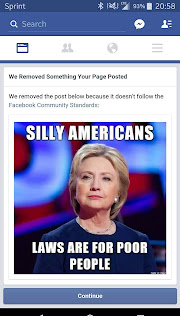 
Admins of the lighthearted political page “Liberty Memes” have been suspended from Facebook and had images mocking Hillary Clinton deleted from their page.

The Facebook page, boasting over 100K likes, has had multiple images removed as they apparently don’t “follow the Facebook Community Standards”. One of the most recent images removed was one that poked fun at Hillary Clinton and the recent recommendation by the FBI not to press charges following Clinton’s email scandal.

The image received approximately 10K likes, 50K shares and 4 million views before it was promptly removed from the page for violating community standards. The image in question can be seen below, right.

Behind a Bill Clinton speaking engagement: A $1,400 hotel phone bill and $700 dinner for two. What's the point of graft if you can't flaunt your ill gotten gains?

Jonah Goldberg has a funny one: The Adventures of Super Hillary


“There has never been any man or woman more qualified for this office than Hillary Clinton,” President Obama declared this week. Take that Jefferson! Sit your mansplaining ass down, Ike ! Hillary’s here.

There’s a reason she wears those smocks that make her look like the United Federation of Planets’ ambassador to Rigel 7: She’s just light years ahead of the rest of us.

Read the “112 reasons (and counting!) Hillary Clinton should be our next president” on her website and you’ll see what I mean (but don’t blame me if you vomit on the keyboard). Of course, you have to wade through an enormous amount of pandering. Free tuition for these people, free health care for those. Look under your seats, everybody! You get a subsidy! And you get a subsidy! Everybody gets a subsidy!
. . .
By the time her list gets to 200, she’ll be raffling off the chance for some under-privileged LBGT preschoolers to push a Koch brother into a volcano.

Read the whole thing
Posted by Fritz at 2:02 PM