Or, shut up and sing. Notoriously reticent about political statements,  Taylor Swift came out this week against Marsha Blackburn (R) and for Phil Bresden (D) vying for the Senate in Swift's current home state of Tennessee (she was born and raised in Pennsylvania):

Taylor Swift, the pop star who famously kept her political views private during the 2016 election and beyond, made a rare public statement on Instagram Sunday, supporting two Democratic nominees in her home state of Tennessee and coming out strongly against Republican U.S. Rep. Marsha Blackburn

Unsurprisingly, people are going nuts. Many Swift fans are celebrating her newly-public progressive leanings, while backlash continues to mount from the right, with the National Republican Senatorial Committee (NRSC) releasing a snarky press release Monday, detailing how “multimillionaire pop star Taylor Swift came down from her ivory tower to tell hardworking Tennesseans to vote for (Democratic Senate candidate) Phil Bredesen.” 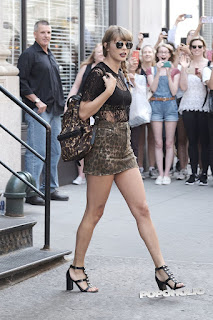 
For an artist who’s made many career pivots in her decade in music, Swift’s statement is immediately among her most controversial choices yet. And yet, it’s something she needed to do. Whether fans align themselves with her political leanings or not, Swift’s statement helps rectify one of her biggest contradictions as a star – that she’s advocated for feminism, the LGBTQ community and the #MeToo movement, making progressive ideals central to her public persona, while declining to share her party affiliation or endorse specific candidates. 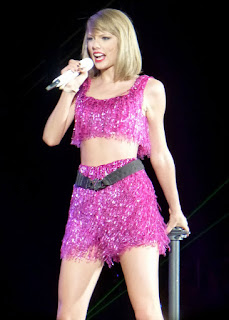 She is, of course, being feted in that part of the media that is liberal, which is to say, most of it.

As a result, it is being said that there has been a  Spike in voter registrations after Taylor Swift pro-Democrat Instagram post. But will the millennials registered as a result remember all the way until election day, or even be able to buy a stamp to vote absentee? Tough question.

Of course, there is another side. Given her roots in country, the now pop star risks alienating some fraction of her audience, and sure enough, Some Taylor Swift Fans Are Destroying the Singer's Merchandise to Protest Her Political Views, which is pretty silly since they already paid for it. For a boycott to actually mean anything, they would actually need to refrain from buying new Taylor Swift merchandise and stop going to Taylor Swift events. The impact is not as immediate as burning CDs, but it doesn't smell quite as bad. And again, I don't know if they have enough long-term memory.