Not much happening on a Sunday morning after a mass shooting. Brian Cates at the Epoch Times on how the  Trump–Russia Collusion Narrative Continues to Collapse, featuring the Mysterious Mr. Mifsud: 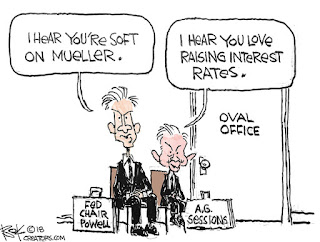 I suspect that FISA warrant on Page does contain something in addition to the Steele dossier information and news stories that also came from Steele. My hunch is the heavily redacted sections of the warrant contain claims that “Russian agents” were found to be reaching out to Page and Papadopoulos, offering to help fix or influence the 2016 presidential election on behalf of Trump.

But those “Russian agents” weren’t really Russian agents—they were the FBI’s own intelligence assets being sent by their handlers to Page and Papadopoulos to entrap them by lying to them.

Joseph Mifsud, Stefan Halper, and Alexander Downer were approaching their targets and attempting to entrap them by July of 2016, long before the plotters approached the FISC in October for the warrant they wanted.

The DOJ/FBI agents running the Crossfire Hurricane probe not only tried to fool Page and Papadopoulos into believing they were being contacted by Russian agents, but I also suspect they presented at least one of their own confidential FBI informants to the FISC that way, as well.

My hunch is that Andrew McCabe, Peter Strzok, and others who were involved deliberately omitted telling the court that Mifsud was their own guy. In other words, they lied to the FISC and told the judge their own intelligence asset was a real honest-to-God Russian spy so they could get the warrant they wanted.

That’s why Mifsud has been in hiding for almost a year. He’s likely the guy that was passed off to Papadopoulos and the FISC as being the real, live Russian spy in this affair.

Recall that when Mifsud introduced himself to Papadopoulos, the Maltese academic then introduced the former Trump campaign adviser to Olga Vinogradova, telling Papadopoulos that the woman was “Putin’s niece,” which was a lie. Politico posted a story about this last year, titled “Mysterious Putin ‘Niece’ Has A Name.”

Mifsud and the-woman-who-really-wasn’t-Putin’s-niece then attempted to persuade Papadopoulos they could get him access to key Russian government officials—including Putin himself.

This was followed by Halper making his own contact with Papadopoulos and attempting to get him to own up to the Trump campaign, having been approached by Russians who offered their help with the election.

This is the classic “push/pull” intelligence sting, where you send one person to the target to “push” or plant information with them, then send another person to “pull” the planted information from the target so you can “prove” it. Radio personality Dan Bongino, who has a new book out entitled “SpyGate,” has been advancing this theory for some time; I now think he’s right.

Halper, Mifsud, and Downer were working with the CIA/FBI as intel assets sent to entrap the Trump campaign by *pretending* to offer Russian information to low-level Trump campaign staff such as Page. And, right now, it looks as if to make that operation work, the FBI might very well have presented one of its own agents to the court as being a Russian spy.

Papadop needs to renege on his guilty plea and challenge Mueller to put Mifsud up in the witness box. 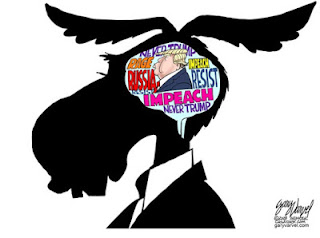 
Yesterday, I wrote to you referring Mr. Michael Avenatti and Ms. Julie Swetnick for investigation of potential violations of 18 U.S.C. §§ 371, 1001, and 1505, for materially false statements they made to the Senate Judiciary Committee during the course of the Committee’s investigation into allegations against Judge Brett M. Kavanaugh. I write today because of important additional information regarding Mr. Avenatti that has since come to the Committee’s attention. In light of this new information, I am now referring Mr. Avenatti for investigation of additional potential violations of those same laws, stemming from a second declaration he submitted to the Committee that also appears to contain materially false statements. As explained below, according to NBC News, the purported declarant of that sworn statement has disavowed its key allegations and claimed that Mr. Avenatti “twisted [her] words.” …

Simply put, the sworn statement Mr. Avenatti provided the Committee on October 2 appears to be an outright fraud. According to NBC News, the purported declarant denied – both before and after the sworn statement was released – the key allegations Mr. Avenatti attributed to her. She stated she was clear and consistent “from day one” with Mr. Avenatti that those claims were not true. And she said Mr. Avenatti “twisted [her] words.” When reporters pressed him on these discrepancies, Mr. Avenatti attempted to deceive them in an apparent effort to thwart the truth coming out.

Accordingly, in light of the seriousness of these facts, and the threat these types of actions pose to the Committee’s ability to perform its constitutional duties, I hope you will give this referral, as well as my prior one related to Mr. Avenatti, the utmost consideration.

As did NBC. AllahPundit: Why Did NBC And Time Magazine Sit On Their Avenatti Scoops For So Long? Easy Peasy!


They didn’t want to take the risk of derailing the Democrats’ last best chance to stop Kavanaugh at a decisive moment. Isn’t it as simple as that?

And if it is, an ominous question must be asked: If the Dems had managed to flip Collins and Flake and bork him, would this NBC report have ever been published? Imagine the outrage on the right if Trump’s nominee had been defeated with help from Avenatti, only to discover that a huge media organization had evidence of chicanery all along.

If it did end up being published, I’m going to guess that it wouldn’t have been published the midterms were safely behind us.