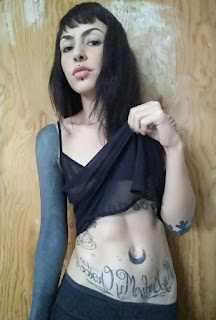 Woman, 23, removes her belly button and gives it to boyfriend as present

A 23-year-old woman removed her belly button and gave it to her ex-boyfriend as a present.

Body modification fanatic Paulina Casillas Landeros, from Jalisco, Mexico, underwent numerous surgeries such as a 'back corset' - which involves piercings on either side of the spine - and a split tongue.

She later decided to remove her belly button as it is "what makes us human" before giving it as a present to her then boyfriend Daniel Ramirez, in 2015. 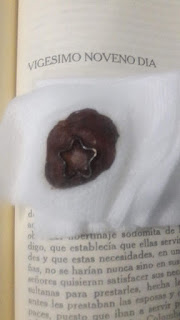 Funny, I thought it was our brain, but maybe that's just me. Although, to be fair, dogs don't have much of a belly button.


But following the removal three years ago, she says she ultimately regrets her decision describing it as "reckless" and "impulsive".

The HR intern and tourism student said: "I have always had problems with my family, I was not very close to them at the time.

Oh, she's in HR. She doesn't need that much brains to be judging whether people deserve jobs. 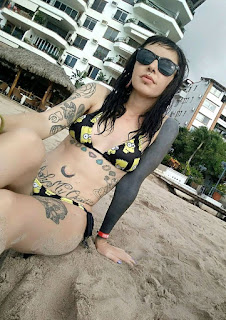 "Body modifications fascinated me, there is something very transcending about them.

"I was very angry, I wanted to cut all unions from everything and everyone.

"I wanted to dehumanise myself in a symbolic way, I wanted to do something controversial.

"I underwent an 'operation' done by a professional but he gave me very bad advice on how to take care of the trauma so it got infected.

"I was suffering, I spent days in bed as if I were quarantined, I couldn’t stretch, push, stand up or laugh.

"It gradually healed itself but not 100 per cent - it will never close entirely."

The price of stupidity is pain. Don't date feminists, or interns in HR.

She's not the only woman in the world sans belly button, however. Supermodel Karolina Kurkova had her's removed as a child in the course of an operation for an umbilical hernia, and I still think of her as fully human, maybe even superhuman. Interestingly, in her photographs, sometimes they Photoshop in a belly button, and sometimes not: 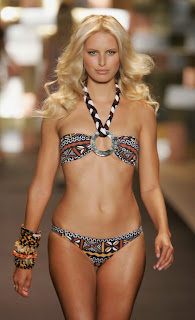