A Hard Day in the Russiagate Mines

Not so much happening. The caravan seems to be sucking up the oxygen out of the news. 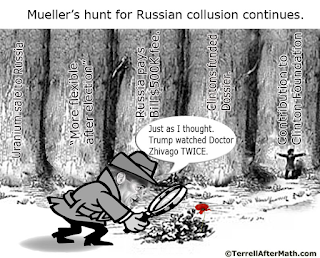 
Casting aside all pretense of journalistic objectivity, the ethically conflicted “newsrooms” of the major legacy networks are hoping that Mueller will intervene in the election by dropping some kind of legal bombshell on the Trump family, inner circle, or administration in the run up to the vote.

Citing the Mueller probe, the only platform most Democrats are running on is one of investigation and impeachment of Trump, and several openly state—as fact—that Trump has committed treason by “colluding” with Putin. The lack of evidence or even a believable motive on the part of either Trump or Putin does not bother them. This is just spun as “all the more reason to keep investigating.” Being against Trump and convinced he is guilty is all they’ve got.

So to argue that his investigation hasn’t yet affected the election is pure jabberwocky; its mere continuation in itself is interference in our political process. Moreover, it has demonstrably affected the polls. It’s the only reason the Democrats can claim to have a “blue wave” building in their favor.

As to Russia, it had far more kompromat on Hillary Clinton, and the Russians have a proven track record of benefiting from her brazen pay-to-play schemes, exposed by WikiLeaks. Why would Russia use WikiLeaks to expose that bribe-worthy fact before she could be safely installed as president? Russia has a national self-interest in seeing the United States become a geopolitically weaker player. Clearly, if Moscow invested in Trump over Clinton to achieve this, Putin must not be as clever as they say. No: It’s all nonsense. 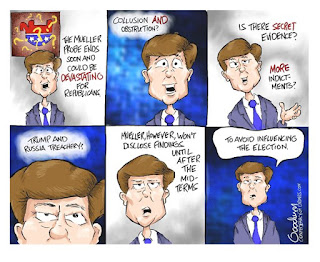 Last week CPL said it was unlikely he would lose, stating: “nothing’s gonna happen on Monday” and the claims against him were “bogus”; whoopsie.

Today’s judgement is in addition to a previous award of $10 million to the same lawyer, Jason Frank.

Couldn't happen to a nicer fellow.
Posted by Fritz at 8:49 AM