After yesterday's dismal showing. A Mueller mystery from Politico, who is the mysterious witness balking his inquiry? Mueller link seen in mystery grand jury appeal

It's unclear exactly what the two sides are fighting over, but the case appears to resemble a separate legal battle involving an associate of Trump ally Roger Stone, Andrew Miller, who is fighting a Mueller subpoena. Miller's lawyers are using the case, slated to be argued at the D.C. Circuit Court of Appeals early next month, to mount a broad legal assault on Mueller's authority as special counsel.

In the more shadowy case, which involves an unknown person summoned before a grand jury this summer, the D.C. Circuit on Monday set a separate round of arguments for Dec. 14.

The case traveled in recent months from U.S. District Court Chief Judge Beryl Howell to the U.S. Court of Appeals for the D.C. Circuit, back down to Howell and back up again to the appeals court with most details shrouded in secrecy, another indication that much of Mueller's activity is taking place behind the scenes and is rarely glimpsed by the press or public.

Meanwhile, the DOJ indicts another Russian:  Russian national charged with attempting to interfere in 2018 midterms


Elena Alekseevna Khusyaynova, 44, of St. Petersburg, Russia, is charged with conspiracy to defraud the United States for managing the financing of the social media troll operation that included the Internet Research Agency, which special counsel Robert Mueller's investigators charged with crimes earlier this year.

Prosecutors who unsealed the complaint Friday say she aided the Russian effort to "inflame passions" online related to immigration, gun control and the Second Amendment, the Confederate flag, race relations, LGBT issues, the Women's March and the NFL National Anthem debate from December 2016 until May 2018.

The social media efforts specifically focused on the shootings of church members in Charleston, South Carolina, and concert attendees in Las Vegas, Nevada, the Charlottesville "Unite the Right" rally, which left one counterprotester dead, and police shootings of African-American men, the complaint says.

The criminal charge says the Russians' online manipulation effort focused on multiple political viewpoints and candidates, but frequently zeroed in on the Republican Party's most well-known leaders.

Another case that will never go to trial. So now the Russians have a precedent for charging any American who criticizes them on social media? Good going!


There are voices sympathetic to a premise, a theory of sorts, that Deputy Attorney General Rod Rosenstein appointed Robert Mueller in an effort to remove the corrupt influence of Deputy FBI Director Andrew McCabe in 2017. According to the theory – Rosenstein’s modus operandi was to facilitate a genuine review of the Russian collusion/conspiracy questions through the appointment of Mueller.

However, in order for that theory to be correct – once Rosenstein discovered the fraudulent basis for the origination of the Mueller probe; meaning once he realized there was an actual FBI and DOJ scheme to construct a soft-coup; he would necessarily have needed to stop defending the false premise which built the foundation for the inquiry.

Is he really trying to push this past the midterms? And, of course, Schiff: House Intel will ramp up probe of Trump's Russia ties if Dems take the House 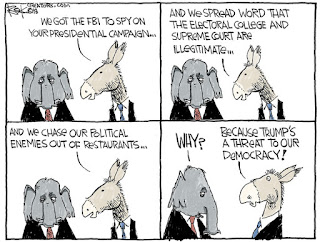 Debra Heine at PJ Media: Papadopoulos Told FBI Informant in 2016 There Was No Russian Collusion in Trump Campaign


In mid-September of 2016, weeks after the Russia counterintelligence probe was launched, then-Trump campaign adviser George Papadopoulos told an FBI informant there was no collusion going on between the campaign and Russia that he knew of, and that such activity would be "treasonous."

Papadopoulos told Solomon that he made the comments to London-based professor and FBI informant Stefan Halper. “He was there to probe me on the behest of somebody else,” Papadopoulos said. “He said something along the lines of, ‘Oh, it’s great that Russia is helping you and your campaign, right George?’”

Papadopoulos said Halper also suggested the Trump campaign was involved in the hacking and release of Hillary Clinton’s emails that summer. “I think I told him something along the lines of, ‘I have no idea what the hell you are talking about. What you are talking about is treason. And I have nothing to do with that, so stop bothering me about it,’” Papadopoulos recalled.

Text messages between fired FBI agent Peter Strzok and his paramour, former FBI lawyer Lisa Page, revealed that Strzok traveled to London in early August of 2016 to meet with intelligence informants (aka "oconus lures") and conducted secret interviews.
Papadopoulos is expected to testify behind closed doors Thursday before two House panels.
. . .
“The truth is, the Papadopoulos predicate went into reversal, but rather than shut down the probe at that point, the bureau turned to other leads like Steele and Page without giving the court a full picture,” one source told Solomon.


Some in Congress are bracing for the possibility that Deputy Attorney General Rod Rosenstein might argue in his interview with lawmakers that the FBI did not have an obligation to disclose all exculpatory evidence to the FISA judges. Such an argument is contrary to how the court works, according to officials who prepare FISA warrants. The FBI is required to submit only verified information and to alert the court to any omissions of material fact that cast doubt on the supporting evidence, including any denials, these officials told me.

"I actually have zero Russian contacts or connections whatsoever," Papadopoulos told Sean Hannity Tuesday night on Fox News. "It seems I was completely set up by Western intelligence masquerading as Russians. Now if that's true, certain people in our intelligence community knew it the whole time -- that these people that I encountered were actually Western intelligence and not Russians -- what on earth am I getting in trouble for?"

The Mysterious Mr. Mifsud actually went so far as to introduce one of his Russian students to Papadop as Putin's niece. Nice!


Solomon said that the spin coming out of the Justice Department Tuesday night was "amazing."

"I would call it un-American," he declared. "People are telling me tonight that they don't think the Justice Department had an obligation to tell the courts about exculpatory information!"

If it turns out Papadop was set up, Mueller ought to serve his 14 days for obstruction of justice and fraud on the United States.
Posted by Fritz at 9:35 AM