Of course, you've heard by now that Fauxcahontas, Elizabeth Warren had Stanford genetics expert, Carlos D. Bustamante, run a DNA analysis, and claims to have detected a trace of what may possibly be American Indian DNA. Stacy McCain How White Is Elizabeth Warren? 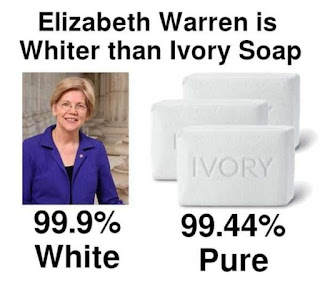 
Senator Elizabeth Warren has released a DNA test that provides “strong evidence’’ she had a Native American in her family tree dating back 6 to 10 generations, an unprecedented move by one of the top possible contenders for the 2020 Democratic nomination for president.
Warren, whose claims to Native American blood have been mocked by President Trump and other Republicans, provided the test results to the Globe on Sunday in an effort to defuse questions about her ancestry that have persisted for years. She planned an elaborate rollout Monday of the results as she aimed for widespread attention.
The analysis of Warren’s DNA was done by Carlos D. Bustamante, a Stanford University professor and expert in the field who won a 2010 MacArthur fellowship, also known as a genius grant, for his work on tracking population migration via DNA analysis.
He concluded that “the vast majority” of Warren’s ancestry is European, but he added that “the results strongly support the existence of an unadmixed Native American ancestor.”
Bustamante calculated that Warren’s pure Native American ancestor appears in her family tree “in the range of 6-10 generations ago.” That timing fits Warren’s family lore, passed down during her Oklahoma upbringing, that her great-great-great-grandmother, O.C. Sarah Smith, was at least partially Native American.
Smith was born in the late 1700s. . . .
The inherent imprecision of the six-page DNA analysis could provide fodder for Warren’s critics. If O.C. Sarah Smith were fully Native American, that would make Warren up to 1/32nd native. But the generational range based on the ancestor that the report identified suggests she’s between 1/64th and 1/1,024th Native American. 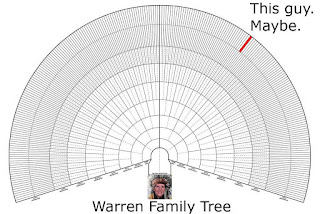 I noted that. As a formerly practicing scientist, I'm well versed in the use of weasel words to couch a statement you can't completely justify.


At most, Warren has less than 1.6% Native American ancestry and, as for “family lore,” this test indicating the possibility of a very distant non-white ancestor — she’s so white, she would have qualified for membership in the Bund Deutscher Mädel — absolutely does not confirm the tales Warren has told. She claims that her parents eloped because of anti-Indian prejudice in Oklahoma: “My daddy’s parents, the Herrings, were bitterly opposed to their marrying because my mother’s family, the Reeds, was part native American.” Whether or not her paternal grandparents were “bitterly opposed” to her father marrying her mother, it could not have been because the Reeds were “part native American,” as a 1/32nd non-white ancestry (i.e., 96.9% white) would not be apparent and, contrary to her telling, the remote ancestor she claimed was Cherokee was identified as white in census records. If the Senator is asserting that her father’s parents were extraordinarily ignorant, we’ll take her word for it, but this tells us nothing about the alleged ancestry of her mother’s side of the family.

Professor William Jacobson at Legal Insurrection has covered this dispute longer and in more detail than anyone else:

For more than five years, Professor Jacobson has focused on this central point of the controversy: Warren’s DNA is irrelevant both to her claims of being a Cherokee and to the indisputable evidence that she exploited this claim to have herself listed as a “woman of color” for employment purposes, “to advance her career.” By checking the box for “Native American” on her employment forms, the blue-eyed blonde Warren unintentionally called into question the entire purpose of “diversity” quotas in academia. Going back to 1965, when President Lyndon B. Johnson first used the phrase “affirmative action” to describe federal policy to require employers to take measures to remediate past policies of discrimination against African-Americans, the idea was to compensate for past wrongdoing. Elizabeth Warren cannot show that she herself, or her parents or grandparents, suffered employment discrimination on the basis of alleged Native American ancestry and, because none of her known ancestors was ever officially enrolled as a member of the Cherokee Nation (or any other recognized Native American group), she could not lawfully check that box on employment forms.

The mere possibility that, at some point prior to the 1790 Census, one of Warren’s ancestors was non-white, does nothing to confirm her claim to a specifically Cherokee ancestry — there were many different native tribes in the Eastern U.S. — and it certainly doesn’t show that this blonde woman suffered any discrimination, in Oklahoma or anywhere else.

Cherokee Nation officials are angry at Warren, and rightly so, and she has no one but herself to blame, as David Harsanyi points out:


It was Warren who made it all an issue. We don’t fully know how important Warren’s claims were in her career. There is, however, much evidence that her self-driven minority claims in the 1990s were helpful. Warren . . . was listed as a “minority faculty member” by The University of Pennsylvania. She had the school switch her designation from white to Native American. Warren self-identified as a “minority” in the legal directory, and Harvard Law School preposterously listed her as one of the “women of color” the school had hired. On job applications, Warren was very specific in claiming that she had Cherokee and Delaware Indian ancestry.

When her supposed Native American heritage came under scrutiny during her first Senate bid, Warren presented a recipe she had published in her cousin’s cookbook as evidence of her background. It was signed “Elizabeth Warren — Cherokee.” Later we learned that even the recipe was taken verbatim from an article in The New York Times five years earlier.

She plagiarized a recipe in an effort to “prove” her Cherokee ancestry!

By the way, it’s important to realize that the only reason this story is making headlines now is because Elizabeth Warren intends to pursue the 2020 Democrat Party nomination for president. If she were successful in that pursuit, she would then take on President Trump in the general election and, even the staunchest Republican must admit, Trump has an unfortunate tendency to boast and brag in a manner as dishonest as Warren’s. The difference is, Warren’s lying was about claiming victimhood in order to exploit affirmative-action policies, whereas Trump lies about things like sexual affairs with Playboy models. Can you guess whose lies the average American is more likely to shrug off?

I have several thoughts on this. First Claims of over precision (and bad calculation of the probabilities resulting from DNA analysis are legendary, but I would hope that a Stanford pro would avoid the rookie mistakes. but the broad range of generations (6-10) he suggested that have passed since a full blooded Amerindian ancestor seems to suggest considerable uncertainty.

What are the chances of a false positive? The trace was so weak that it would not show in the standard commercial tests, which report to a single percentage point.

Clearly, a small DNA segment was found that is either very rare, or absent in those of pure European extraction. But is that rare, or absent. Amerindians are descended, some 14,000 years ago, from people in the Far East. Could there be a trace introduced into the European lineages via repeated invasion from the East? I'd like to see this better explored.

Could there be a Hispanic in her line? Hispanics are known have considerable admixture of Amerindian genes. It would still be an Amerindian source, but ethnically, not Indian at all.

One thing is clear, Elizabeth Warren likely has more Neanderthal blood than Indian blood.
Posted by Fritz at 11:13 AM