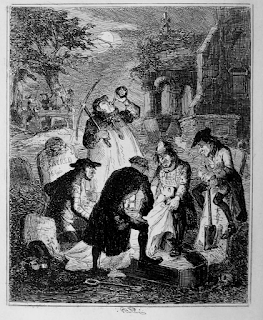 Sort of from the National Museum of Civil War Medicine, via the Ace of Spades: A Better Man Never Lifted A Spade

. . . In the decades that followed, there were plenty of bodies available and ready for the taking for the University of Maryland located in Baltimore. A thriving port city, Baltimore was in a period of rapid growth and the city’s meager infrastructure could not keep up. An antiquated sewage system in the city quickly led to a public health nightmare. Outbreaks of cholera, yellow fever, and dysentery led to an abundance of fresh bodies. Cemeteries of poor whites and free blacks were targeted most frequently. Their inability to afford medical care led to regular burials in the city’s graveyards. The impoverished were often placed in pine coffins, a cheap soft wood that was easy to break open. Baltimore, a city with a long history of mob violence protests, suffered its first riot as a result of body snatching in 1807. Protests became so common that the University of Maryland had secret passageways under the building to allow students and faculty to escape their angry neighbors. 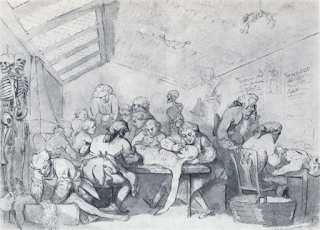 In the 1820s, the school had no problems keeping up with their own demand for corpses once they hired a man named Frank. Officially he was listed as their building’s janitor, but he supplied the corpses for a growing medical school. Frank’s last name is lost to history; the university remained cautious and only referred to him by his first name. Frank excelled at his job and the faculty quickly found itself with an overabundance of specimens. With the surplus supply, professors found an opportunity to increase the school’s bottom line. They began shipping surplus bodies to colleges and universities that lacked a prodigious body snatcher such as Frank. In a letter to a colleague in Maine, a professor in Baltimore boasted of Frank’s success, assuring his counterpart that “a better man never lifted a spade.” He described the pricing for three bodies stored in whiskey: a reasonable $50. The barrels themselves cost $1. The university charged an additional 35 cents per gallon of whiskey. And, the value of a dead loved one plucked from their eternal rest in a Baltimore graveyard? Just $10 each.

But, one might ask, what happened to the left-over whiskey? There are rumors. Stories that bring a shudder. Surviving accounts claim the poor students imbibed it, eager to get their liquor no matter how questionable the source. Others claim that faculty in medical institutions may have decided to recoup some of their losses and sold the liquor to their communities’ more questionable establishments, and creating the term “rot-gut whiskey.” . . .

In Baltimore? I'm sure of it.