I didn't get to it yesterday, thanks to my play date with a chainsaw. Sorry.

Obama Had Secret Plan In Case Trump Didn't Accept 2016 Election Results, Report Says But what was his secret plan in case Hillary didn't accept the results?


"The Obama White House plan, according to interviews with Rhodes and Jen Psaki, Obama’s communications director, called for congressional Republicans, former presidents, and former Cabinet-level officials including Colin Powell and Condoleezza Rice, to try and forestall a political crisis by validating the election result," the Intelligencer reported. "In the event that Trump tried to dispute a Clinton victory, they would affirm the result as well as the conclusions reached by the U.S. intelligence community that Russian interference in the election sought to favor Trump, and not Clinton."
. . .
In the two years since the 2016 presidential election, the loser, Hillary Clinton, has yet to accept the fact that she lost and has repeatedly blamed everything imaginable for the outcome.

And speaking of the devil,  Security Clearances for Hillary Clinton, Cheryl Mills, and 4 Others Withdrawn


You can't be civil to these people.

Glenn Simpson's Lawyer Says He Will Plead the Fifth to Avoid Testifying Before Congress. As Ace notes, I wonder what, or rather which, crimes he's trying to hide. More from John Sexton at Hot Air:
Glenn Simpson Invokes Fifth Amendment Right Not To Testify Before House Judiciary Committee


So Simpson’s approach is that this isn’t a real investigation, which is more than a bit ironic given that he’s the person behind the Steele dossier which takes the form of an investigation but is full of uncorroborated accusations which were eventually published by Buzzfeed not on the grounds that they were reliable but on the grounds that Trump had been briefed on them.

GOP Rep. Mark Meadows told the Hill, “It is very telling when Glenn Simpson has talked to multiple reporters and multiple individuals at the Department of Justice over the last two years. When the day of reckoning is on the horizon, he chooses to lose his voice.”

An interesting piece from the Post: Rosenstein-McCabe feud dates back to angry standoff in front of Mueller


Shortly after Robert S. Mueller III was appointed to investigate possible coordination between President Trump’s campaign and the Kremlin, he was drawn into a tense standoff in which Deputy Attorney General Rod J. Rosenstein and then-acting FBI director Andrew McCabe each urged the other to step aside from the case, according to people familiar with the matter.

At the time of the confrontation in mid-May 2017, tensions were running high at the FBI and Justice Department, and between Rosenstein and McCabe. Trump had just fired James B. Comey as the bureau’s director, and almost immediately afterward, FBI officials had opened a case into whether the president had obstructed justice.

Some in the bureau eyed Rosenstein warily, because he had authored a memo that was used by the administration to justify Comey’s termination. If the president had obstructed justice, they reasoned, Rosenstein may have played a role in that. Justice Department officials, meanwhile, were concerned that the FBI — and McCabe in particular — may have acted too hastily to open an investigative file on the president after Comey was fired and that the move could be painted as an act of anger or revenge.

The previously unreported episode involving Mueller, Rosenstein and McCabe — which occurred within days of Mueller’s becoming special counsel — underscores the deep suspicion between senior law enforcement officials who were about to embark on a historic, criminal investigation of the president. That mistrust has continued to this day, with defenders of each offering conflicting accounts of exactly what was said and meant in the days surrounding Mueller’s appointment.

I don't see how any of these guys, including Mueller are not too conflicted to investigate the President. Pam Geller:  Rosenstein Refuses to Turn Over Subpoenaed Memos – Backs Out of Today’s Congressional Hearing. Brendan Kirby at PoliZette:


“I don’t know, but I still know the facts are the facts,” Jordan said. “And they have yet to give us the McCabe memos that we subpoenaed.”

That is a reference to memos written by fired Deputy FBI Director Andrew McCabe. The Times based its story in large part on descriptions of those memos.

Jordan (pictured above right) said he is eager to delve into testimony of former FBI general counsel James A. Baker, who told congressional investigators that two senior FBI officials told him that they believed Rosenstein was serious about his 25th Amendment musings. 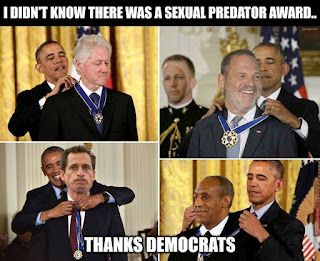 Mediaite: Trump: ‘Devin Nunes Should Get the Medal of Honor’ Well, if Obama could give it out to four different woman abusers, it seems like he should just go ahead with it.

Scott Johnson at Powerline writes about A conspiracy so vast…


. . . in “A conspiracy so vast…(but where’s the crime?),” the Weekly Standard’s Eric Felten takes a look at the indictment itself. Eric notes that the indictment charges Concord with “conspiracy to defraud the United States.” No substantive underlying crime is alleged. This past March Andrew McCarthy explored Mueller’s use of this catch-all conspiracy statute in the case against Paul Manafort and Rick Gates. Eric Felten’s intensely interesting article adds depth and dimension to the discussion, suggesting yet another respect in which Mueller madness is making its presence felt.

"In this district, the government's decision to re-try a defendant on deadlocked counts is always made in a timely manner and sentencing occurs within two to no more than four months from entry of a guilty plea or receipt of a jury verdict," Ellis wrote.

Prosecutors indeed face a decision over the 10 counts on which the jury deadlocked in the August trial. The government has to decide whether to re-try those charges or throw them out. Prosecutors had asked for more time to make their decision.

The move was the latest by Ellis that could rankle prosecutors who recently gained Manafort as a key cooperator in the investigation into Russian election interference and any possible coordination with associates of President Trump.

During Manafort's weekslong trial over the summer, Ellis made a point of hurrying prosecutors and routinely threw them off balance with comments about their facial expressions, eye contact, trial strategy and their requests to introduce certain pieces of evidence that he found unnecessary.

Linked at Pirate's Cove in the weekly Sorta Blogless Sunday Pinup and links.
Posted by Fritz at 9:25 AM