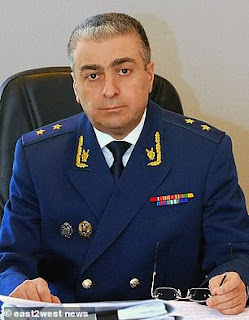 A high-ranking Russian law official believed to be the authority behind attorney Natalia Veselnitskaya, who took part in the notorious Trump Tower meeting with Donald Trump Jr during the presidential campaign, has been killed in a mysterious helicopter crash.

Deputy prosecutor-general Saak Karapetyan - a long-time ally of President Vladimir Putin - died last night when his AS-350 came down in Kostroma region northeast of Moscow during an unauthorized flight.

Karapetyan had been in charge of Russian criminal investigations into the poisoning of former spy Sergei Skripal and his daughter Yulia in the UK, and the deaths of Putin critic Boris Berezovsky and of dissident Alexander Litvinenko.

"an unauthorized flight"? Trying to escape something?

It has been alleged that then-candidate Trump’s surrogates agreed to meet with the Russian lawyer because they were promised compromising information about Clinton provided to Veselnistkaya by Kaarapetyian’s office, according to leaked emails of introduction. Trump Jr has vehemently denied that the meeting had anything to do with 'dirt' on the Democratic candidate, instead claiming that its focus was Russian adoption policy.

Veselnistkaya has offered a different version of events, publicly claiming that she and Trump campaign officials talked about the prospect of overturning the Magnitsky Act.

‘[I]f we come to power, we can return to this issue and think what to do about it. I understand our side may have messed up, but it'll take a long time to get to the bottom of it,’ she recalled Trump Jr telling her, in an interview with Bloomberg News. The meeting in Trump Tower is currently at the center of special counsel Robert Mueller’s ongoing investigation into allegations of collusion between the Trump campaign and Russia and interference by the Kremlin in the 2016 election.

The article doesn't mention that Veselnitskaya met with Glenn Simpson of FusionGPS, the infamous Clinton and DNC funded Democratic black ops news firm, responsible for the equally infamous "Steele Dossier" both before and after the infamous meeting. Is the international Clinton/Putin machine cleaning up loose ends, or was it really just a helicopter accident? Helicopters are pretty dangerous.
Posted by Fritz at 9:38 AM