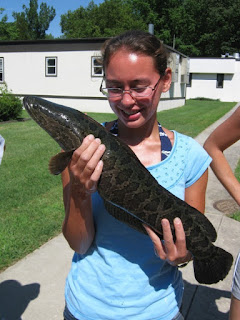 
A northern snakehead — the non-native fish whose 2004 appearance along the Potomac River watershed unleashed a wave of public concern — has for the first time been found within the James River drainage in Virginia. The James is Virginia’s largest Chesapeake Bay tributary.

The fish was collected on April 27 from Lakeview Reservoir near Petersburg by biologists with the Virginia Department of Game and Inland Fisheries. It has now been deposited in the Nunnally Ichthyology Collectionof William & Mary's Virginia Institute of Marine Science, where it joins two other snakehead specimens.

“We now have three wild-caught specimens of Channa argus in the collection,” says Curatorial Associate Sarah Huber, “the one we just got from the James River drainage, one from the Potomac River drainage where the fish made its first Virginia appearance, and another from Chesapeake Bay near the mouth of the Little Wicomico River.”

The species is now established throughout the lower Potomac River watershed and has been observed in the lower reaches of several other Maryland rivers as well as the lower stretches of the Susquehanna and Delaware rivers.

VIMS Associate Professor Eric Hilton, curator of fishes for the Nunnally Ichthyology Collection, says it’s likely that snakeheads could spread within the James River watershed once introduced. “Lakeview Reservoir is on Swift Creek, a tributary of the Appomattox. It can easily spread from there to at least the freshwater portions of the James River itself,” says Hilton.

A broader expansion is less probable, but not impossible. “Snakeheads are restricted to some degree by not being able to live in full strength sea water — or even the mainstem of the bay,” says Hilton. “But it’s possible they can get from the mouth of one tributary to another along the bay shoreline.”

The northern snakehead is a native of China that scientists believe was most likely introduced to the Bay watershed by release of a live fish purchased from an Asian food market. Hobbyists may also have released fish that had outgrown their aquarium tanks. Prior to being listed as “injurious wildlife” under the Lacey Act in 2002, snakeheads were sold in fish markets, restaurants, and pet stores in several major U.S. cities.

Cute girl electro-fishes for Snakeheads. Look how many she gets out of what is basically a big puddle!

Wombat-socho has "Rule 5 Sunday: Hockey Girls" up and ready for action.
Posted by Fritz at 5:15 PM