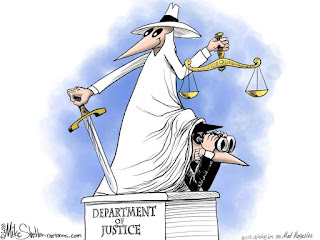 We'll be starting off our "Spygate" selections today with the estimable Andrew McCarthy: The Obama Administration’s Hypocritical Pretext for Spying on the Trump Campaign


So far, apologists for the Trump-Russia investigation have posited only reasonable suspicions of Russia sympathies, harbored by a handful of Trump campaign figures and implied by some of Trump’s campaign rhetoric. Reasonable suspicions are not trifles, but neither are they in the same ballpark as egregious misconduct.

Read the whole thing, of course. By way of Wombat-socho's "In The Mailbox: 05.29.18", First Street Journal reminds us of the implausibility of James Clappers claim that no one in the White House knew what was happening in  Watergate 2.0 – Implausible Deniability. James Clapper: I ‘absolutely’ did not know about FBI’s confidential source on Trump campaign, but if there was the White house knew nussing, nussing. Paul Sperry at the New York Post, Carter Page: The FBI ruined my life


Page believes the FBI’s mole, professor Stefan Halper, was secretly spying on him as part of a “politically motivated” investigation of Team Trump, using fake sympathy to gain his trust — all while fishing for dirt on Page’s ties to Russia, where he’d worked as an energy consultant.

“I wouldn’t be surprised if it turned out to be a trap,” Page said.

Larwin's Linx covers The Ongoing Scandal Jed Babbin at the Spectator:  Obama’s Guilty Contentment, He and his administration remain an ongoing scandal, no matter how much he brags about being Mr. Clean.  Byron York at the Washington Examiner: Trump campaign vet: Informant used me to get to Papadopoulos. More evidence that George Papadopoulos was set up for the fall. Jeff Carlson at marketswatch, Devin Nunes – A Look of Shock. Check out the timelines and the one at Christopher Steele Timeline:  Sundance at CTH Jonathan Turley Discusses Spygate and Sally Yates:

I think this tweet from June of 2016 explains why they infiltrated and spied on Trump's campaign, even though they all expected Hillary to win. https://t.co/hXtSvMuSqW
— Instapundit.com (@instapundit) May 28, 2018


“So you didn’t do any work on the Trump matter after the election date; that was the end of your work?” Simpson was asked during the interview.
Simpson responded, saying: “I had no client after the election.”

“As we now know, that was extremely misleading, if not an outright lie,” the Republican wrote to his fellow Judiciary Committee member, Delaware Sen. Chris Coons.

“Contrary to Mr. Simpson’s denial in the staff interview, according to the FBI and others, Fusion actually did continue Trump dossier work for a new client after the election,” Grassley said.

Grassley pointed to statements a former Senate Intelligence Committee staffer, Daniel Jones, gave to the FBI in March 2017 about his work alongside Fusion GPS to investigate Trump’s possible Russia links.

A group of seven to 10 wealthy donors from California and New York paid $50 million to fund the project, Jones told the FBI.

Jones’ consulting firm, the Penn Quarter Group, “had secured the services Steele, his associate [redacted], and Fusion GPS to continue exposing Russian interference in the 2016 Presidential election,” he told the FBI.

Ace: Senator Grassley: Fusion GPS Head Glenn Simpson Was Either Outright Lying or "Extremely Misleading" in Claiming He Didn't Have a New Client Paying Him to "Research" RussiaGate After the Election


When will the DOJ or FBI be prosecuting their asset Glenn Simpson for lying to Congress?

But according to NYT: With “Spygate,” Trump Shows How He Uses Conspiracy Theories To Erode Trust and Watergate Reporter Says Trump is Trying to Keep the American People in the Dark on Russia. The Atlantic: The Chilling Effect of Trump’s War on the FBI Just think of them as Democrats with press passes.

Sorry, I’ve got to start focusing my energy on North Korea Nuclear, bad Trade Deals, VA Choice, the Economy, rebuilding the Military, and so much more, and not on the Rigged Russia Witch Hunt that should be investigating Clinton/Russia/FBI/Justice/Obama/Comey/Lynch etc.
— Donald J. Trump (@realDonaldTrump) May 29, 2018 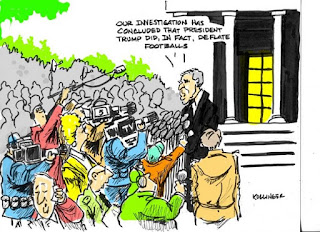 The 13 Angry Democrats (plus people who worked 8 years for Obama) working on the rigged Russia Witch Hunt, will be MEDDLING with the mid-term elections, especially now that Republicans (stay tough!) are taking the lead in Polls. There was no Collusion, except by the Democrats!
— Donald J. Trump (@realDonaldTrump) May 29, 2018


Evgeny "Gene" Freidman, known as New York's "Taxi King," pleaded guilty last week to criminal tax fraud for failing to pay $5 million in taxes in a deal that would allow him to avoid prison time.

The no-prison deal was a significant enhancement from an offer Freidman rejected on April 4 -- just a few days before the FBI raid on Cohen -- that would have included a minimum of two years and as much as six years in prison and a $1 million fine, according to transcripts of the March court proceeding. The offer included a sliding scale; if Freidman paid less than $1 million he would face more jail time. Friedman had faced as much as 25 years in prison when he was charged last year.

That sounds like legal extortion. It also sounds like they didn't get what they wanted in the raid. But they have plenty to sort through: Bob Van Voris at Bloomberg Cohen Prosecutors to Get About 1 Million Items From Phones. A whole lot of inconsequential and irrelevant material. What do you think they'll leak?
Posted by Fritz at 8:35 AM