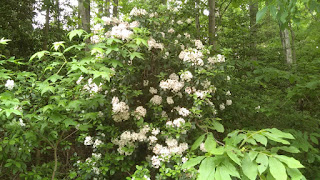 'Tis a mildy warm, sticky, overcast day, but the threatened showers and T-storms have not yet arrived at this point. Skye and I headed off to the beach to meet Georgia there about noon. The Mountain Laurel is blooming in the laurel hell in our back lots/ 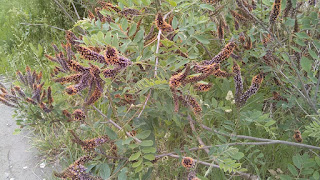 Down at the beach, a few large bushes of False Indigo are in bloom:


Amorpha is a genus of plants in the pea family, Fabaceae. All the species are native to North America, from southern Canada, most of the United States (US), and northern Mexico. They are commonly known as false indigo. The name Amorpha means "deformed" or "without form" in Greek and was given because flowers of this genus only have one petal, unlike the usual "pea-shaped" flowers of the Faboideae subfamily. Amorpha is missing the wing and keel petals. 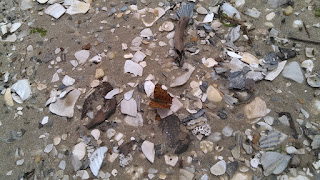 An Eastern Comma sat on the beach long enough for me to crouch down and get a half decent cell phone photo. 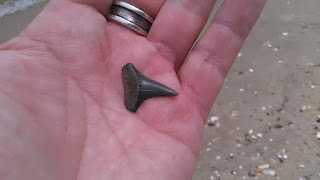 The tide was half way down, and the beach was mostly sand, so tooth hunting was difficult, but Georgia found this nice little Mako.
Posted by Fritz at 3:03 PM