A lot to cover today. First off, WaPo: White House to convene GOP lawmakers to review classified information on FBI source, and they're not very happy about it, but they hold out hope that Rosenstein is just stalling for time:

That could be viewed as something of a concession from the Justice Department, which had been reluctant to turn over materials on the source to GOP lawmakers demanding them. But it also could be a bureaucratic maneuver to buy time and shield actual documents. 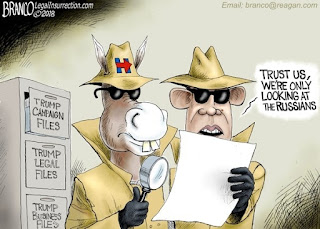 They're afraid it could lead to Some House Republicans Call for Second Special Counsel, to Investigate How Hillary Was Exonerated, How Mueller Got Appointed, and How the FISA Warrants Were Handled, yep, good. Sauce for the gander. CNN: Trump On “Shaky Ground” Ordering A Probe Into Campaign Spying:


In a deft maneuver, Rosenstein may have defused Trump’s fury for now by asking the department’s inspector general to look into the President’s claim, and top Justice Department officials will share highly classified information with lawmakers related to the Russia investigation.

But the fact the conversation took place at all reflects the extraordinary times in Trump’s Washington — when a President has turned on his own Justice Department and is exhorting his loyal political followers to do the same in a way that can only provoke a greater confrontation.


On Sunday, via Twitter, Trump demanded that the Justice Department concoct a transparently political investigation, with the aim of smearing veteran professionals at Justice and the FBI and also throwing mud at the previous administration. Trump’s only rational goal is casting doubt on the probe by special counsel Robert S. Mueller III, which appears to

An amusing post at Althouse as Max Boot and Scott Adams go at it: Obstructing injustice. Adams: "Obstructing justice would be bad. Obstructing INJUSTICE is why voters hired him. It's his job to know the difference, and he's showing his work. I appreciate his transparency on this. Presidents have freedom of speech too."

Jeffrey Lord at the American Spectator: Deep Stategate: The Sweetheart Leaks. Anti-Trumpists at Justice and the FBI believe in oversight only by the New York Times and Washington Post.


Americans will soon learn from the President what he feels he can reveal — and more to the point whether this is about secrets or embarrassment. Is this about the truth? Or protecting people with names like ex-FBI Director James Comey, ex-CIA Director John Brennan, ex-Deputy Attorney General Sally Yates, and ex-DIA head James Clapper. Sad as it is to say, there is, with reason, a massive amount of distrust by Americans in these bureaucratic fiefdoms as led by these Obama cronies — with reason.

Yuval Levin at National Review: A Thought on the Trump-DOJ Scandal. More than one, actually.
Speaking of Secret Sauce, err Source, Washington Post finally come clean with a story on Stefan Halper: Who is Stefan A. Halper, the FBI source who assisted the Russia investigation? Just a mild mannered academic who buys a lot of tea and crumpets for fellow spies. Ace as this to say: Washington Post, May 8: Revealing the Name of the Spy Could Put Lives in Danger
Washington Post, Today: Let's Talk About This Stefan Halper Fellow In Detail. "So: Is this a grave threat to national security or not? National Security Clown Nose On, National Security Clown Nose Off." Jonathon Turley at the Hill joins the garden party with FBI source in Russia probe raises alarms over political surveillance. And we have a story from Michael Caputo that there may have been more than one provocateur/spy run at the Trump campaign: Former Trump Adviser Makes Claim About A Second Informant, Another 'informant' attempted to infiltrate Trump campaign under Obama, campaign aide says. I saw him on the Cavuto show claim someone from another agency tried to come on to him said he/she/it had Hillary's missing emails.

"I know because they came at me," Caputo added. "And I'm looking for clearance from my attorney to reveal this to the public. This is just the beginning. . . "When we finally find out the truth about this, Director Clapper and the rest of them will be wearing some orange suits," Caputo told Ingraham, referring to former Director of National Intelligence James Clapper.

Ace: Yes, this is what I was figuring.

Since the beginning, the question of how the FBI investigation began, more particularly when, has been troubling. Each revelation seems to push the time line back further. Michael Flynn and the Russian ambassador, Carter Page and his trip to Moscow, George Papadopuolosu or whoever and his drunken venting to the Australian ambassador have all been cited. Ace:  Did the FBI Trump Squad Discuss The Dossier with CNN? "Sean Davis looks through the emails, and thinks FBI officials -- Andrew McCabe especially -- were very familiar with CNN's thinking." Hot Air: Andrew McCabe Knew CNN Was Ready To Publish Dossier Story Two Days After Trump Was Briefed.  Matt Vespa at Townhall: 'Flood Is Coming': FBI Front Office Discussed Trump Dossier With CNN.  Julie Kelly at American Greatness shows how the snooping on Gen Flynn probably originated much earlier than we previously were led to think: Did the Obama Administration Spy on Michael Flynn? Why? They just didn't like him.

There is another reason the Obama Administration might have targeted Flynn: The former president despised him. In fact, during their first meeting in the White House after the 2016 election, Obama warned Trump not to hire the former three-star general. Flynn was forced out as director of the Defense Intelligence Agency in 2014 after reportedly clashing with none other than . . . James Clapper.

Matt Vespa again: So, When Did The Russia Probe Become A Political Clown Show?; UPDATE: A Set Up?

But for the most complete, thoughtful compilation of the timeline, it's hard to beat Andrew McCarthy's piece at National Review: The Real Origination Story of the Trump-Russia Investigation


But here is what we can surmise.

There are many different ways the Obama administration could have reacted to the news that Page and Manafort had joined the Trump campaign.

Carter Page and Paul Manafort joined the Trump campaign in early spring, and the FBI was concerned about their possible ties to Russia. These were not trifling concerns, but they did not come close to suggesting a Trump-Russia espionage conspiracy against the 2016 election.

These FBI concerns resulted in a briefing of the Obama NSC by the FBI sometime in “late spring.” I suspect the “late spring” may turn out to be an earlier part of spring than most people might suppose — like maybe shortly after Page joined the Trump campaign.

There are many different ways the Obama administration could have reacted to the news that Page and Manafort had joined the Trump campaign. It could have given the campaign a defensive briefing. It could have continued interviewing Page, with whom the FBI had longstanding lines of communication. It could have interviewed Manafort. It could have conducted a formal interview with George Papadopoulos rather than approaching him with a spy who asked him loaded questions about Russia’s possession of Democratic-party emails.

Instead of doing some or all of those things, the Obama administration chose to look at the Trump campaign as a likely co-conspirator of Russia — either because Obama officials inflated the flimsy evidence, or because they thought it could be an effective political attack on the opposition party’s likely candidate.

From the “late spring” on, every report of Trump-Russia ties, no matter how unlikely and uncorroborated, was presumed to be proof of a traitorous arrangement. And every detail that could be spun into Trump-campaign awareness of Russian hacking, no matter how tenuous, was viewed in the worst possible light.

The Trump-Russia investigation did not originate with Page or Papadopoulos. It originated with the Obama administration.

George Neumayr at the American Spectator: John Brennan’s Plot to Infiltrate the Trump Campaign Ace: Dan Bongino: It Was Brennan  "It's cute that some Conservative Geniuses still believe the ever-shifting stories of when and why this investigation started. Hey, they've only changed the story three times already, but sure, go ahead believing their fourth version." Kathryn Blackhurst at Polizette: Brennan’s ‘Vicious’ Tweet Means He’s Worried About Being Exposed


“One of the reasons, I think, that John Brennan’s tweet was so vicious in tone was because he does not want this behavior exposed,” Napolitano said. “He probably was behind it — and in fairness to him, it went on long before he got there and will go on long after he is gone.”


First, the U.S. legal system has gone berserk. Once, reading the Ten Commandments and consulting the community’s moral compass was a good guide to behavior. Now, no one can calculate the number of laws and regulations that are punishable by criminal sanctions or equally damaging “civil” fines and forfeitures, but it is in the tens of thousands. Many are vaguely defined or do not require knowing ahead of time that the action is illegal, and even the most punctilious of us cannot be sure of compliance.

Any business person certainly, any citizen probably, engages in actions almost daily for which he could be prosecuted. Even on those days when they accidentally obey all laws, people do things a zealous prosecutor might characterize as illegal, especially when they involve complex issues of tax, finance, or regulation. In American Greatness, Julie Kelly aptly described the current situation as “The Rape Culture of Politics by Investigation.”


Why now? The most proximate reason is his willful intransigence regarding the totally lawful congressional requests for documents. Rosenstein’s DOJ has continually stymied the legitimate oversight inquiries from Capitol Hill. In fact, he hubristically stated that he is “not going to be extorted” by duly elected congressional committees. Well, Rod, there are a couple of massive problems with your statement. First, per our Constitution, only Congress possesses the power to oversee the executive branch and, if necessary, prosecute the president. Second, given the accumulating evidence of conflicted and corrupted actors within the DOJ, FBI, and CIA, your failure to cooperate reeks of a man with much to hide.

In addition, Rosenstein needs to be shown the door for his total inability or unwillingness to supervise the Mueller probe. Like Rosenstein, Mueller works for the president as part of the executive branch. He does not maintain the special status of independent counsels of the past, such as Ken Starr. Both Republicans and Democrats, thankfully, realized the danger of unfettered and unaccountable prosecutors who answer to no one, and let that statute lapse. But sadly, because of Rosenstein’s total dereliction of duty, the ludicrous Mueller inquest has become an endless one, searching everywhere possible for even a hint of misconduct by anyone associated with the president. An investigation in search of a crime represents an un-American approach that is antithetical to our notions of jurisprudence.

Mediaite: Harvard Law Professor Laurence Tribe Warns Dems Pushing Trump Impeachment: ‘You Have to Shoot to Kill’ “If you’re going to shoot him, you have to shoot to kill,” Tribe said. “And that requires an overwhelming majority of a bipartisan kind. Otherwise you’re just going to nick the guy, and make him feel empowered and vindicated.” 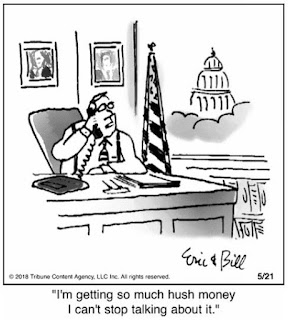 Rush Limbaugh reminds us that maybe Pakistan Hacked the DNC Server and Maybe Hillary’s Illegal Server Too, but we'll never know because the FBI didn't check the server.

Cohen/Avenatti clownshow update: Uhoh, Michael Cohen’s Business Partner Agrees To Cooperate As Part Of Plea Deal. There's corruption in the New York taxi business? Whoda thunk? LA Times: Law firm of Stormy Daniels' attorney hit with $10-million judgment, so he really needs some of that sweet Trump money to pay it off.
Posted by Fritz at 9:51 AM