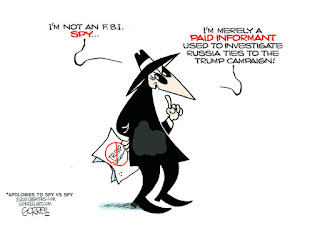 Another banner day. WaPo: Trump tries to rebrand Russiagate as "Spygate" and boy are they pissed. ‘SPYGATE’: Trump steps up attacks on FBI’s probes during campaign. Well it does get rid of the Russia part, and since we rarely talk about Russia anymore, maybe I should accept it. Still thinking.

Sanders said no White House officials would attend, even though Chief of Staff John F. Kelly brokered the gathering. She said Democrats were cut out because they had not requested the same materials that their Republican colleagues had.

“To my knowledge, the Democrats have not requested that information, so I would refer you back to them on why they would consider themselves randomly invited to see something they’ve never asked to,” Sanders said.

That should start to leak by 4 PM, and it should. 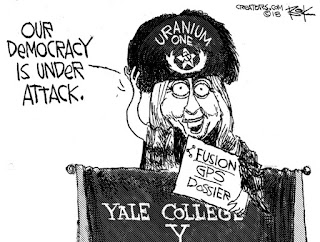 Poor Dana Milbank, House conservatives demand an investigation — of Hillary Clinton, and they should. But lets see what Horowitz has to say first. Kerry Picket at the Daily Caller: FBI Agents Want Congress To Issue Them Subpoenas So They Can Reveal The Bureau’s Dirt, and they should too. See, a subpoena protects them from retribution by the FBI superiors.  Roger K. Simon at PJ Media tells Attorney General Sessions, Your 'Extraordinary Circumstances' Are Here, and he should appoint a special persecutor counsel to investigate the investigators:


But you'll excuse me if I'm a Doubting Thomas.  Perhaps I've seen too many films like the Italian Investigation of a Citizen Above Suspicion or seen too many plays like Brecht's The Caucasian Chalk Circle with its rascally judge Azdak to be sanguine about police and intelligence agencies investigating themselves.  These are bureaucracies whose overwhelming interest is almost always self-preservation.  . . .
Well, Jeff, your turn. You said you wanted "extraordinary circumstances."  Voilá.

Somewhere I heard the when David Ignatius at WaPo speaks, the CIA's lips move. He is doing his level best to put lipstick on the Stefan Halper pig in How the Trump echo chamber pushes bit players like Stefan Halper to center stage


But it’s laughable to imagine Halper as a superspy, infiltrating the heart of the Trump campaign. Those who know Halper describe someone closer to a gregarious busybody and academic eccentric — an intellectual who jostles for first billing on a book cover — than a mole burrowing toward Trump’s inner circle. Like many underemployed ex-professors, he likes to gossip, and perhaps that made him a good intelligence source. But this is not James Bond.

A former British intelligence officer who knows Halper well describes him as “an intensely loyal and trusted U.S. citizen [who was] asked by the Bureau to look into some disconcerting contacts” between Russians and Americans. Isn’t that what the FBI and its sources are supposed to do?

Read the next two in order: Tom Maguire at One More Minute: Trump Collusion


Meanwhile, I am holding out hope for my own madcap speculation. Remember Joseph Misfud, the Maltese Professor who told George Papadopoluos about Russian dirt on Hillary? Perhaps one day we will discover that he was a British MI6 asset posing as Russian-connected and trolling in search of malcontents. In the highly unlikely (but wildly entertaining!) event that this is true and goes public, well, we'll need a bigger fan to process all that will hit it.


Herewith a note on the academic circuit: emeritus professors and visiting fellows are popular covers with espionage agencies because there's minimal work and extensive foreign travel, to international talking shops like the one above. If you make the mistake of being a multinational businessman and go to foreign countries to meet with other businessmen, you'll be investigated up the wazoo. But, if you're a professor and you go to foreign countries to meet with other professors, the world is your oyster. You also get to meet young people, who are the easiest to recruit. 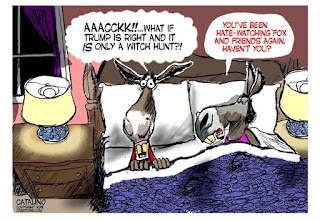 Margot Cleveland at The Federalist: It’s Time To Admit The Russia Investigation Was Illegitimate From The Start.  Da Caller: FBI Informant Stefan Halper Accused Of Making ‘False’ And ‘Absurd’ Allegations About Russian Infiltration At Cambridge.  "Tyler Durnden" at Zero Hedge:  FBI Informant Stefan Halper Paid Over $1 Million By Obama Admin; Spied On Trump Aide After Election That's a lot of tea and crumpets, but not too many $3,000 papers by previously unknown presidential campaign staffers. Sharyl Attkisson: 8 signs pointing to a counterintelligence operation deployed against Trump's campaign


It may be true that President Trump illegally conspired with Russia and was so good at covering it up he’s managed to outwit our best intel and media minds who've searched for irrefutable evidence for two years. (We still await special counsel Robert Mueller’s findings.)

But there’s a growing appearance of alleged wrongdoing equally as insidious, if not more so, because it implies widespread misuse of America’s intelligence and law enforcement apparatus.

Here are eight signs pointing to a counterintelligence operation deployed against Trump for political reasons.

David Harsanyi: The Media’s Defense Of Obama Administration Spying Defies Logic As if logic has anything to do with it. Conrad Black at NR: The Collapse of the Collusion Narrative.  NewsBusters: What Changed? The Same Media Who Excuse Bob Mueller Abused Ken Starr. Strictly a rhetorical question. Just think of them as Democratic operatives with press passes. Twitchy: Ka-BOOM! Mollie Hemingway NUKES wagon-circling MSM’s ‘coordinated’ spin on spying allegations 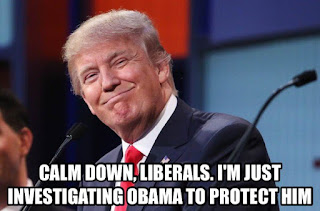 FBI "matters": Adam Shaw at Fox News, Huma email horror returns to haunt FBI brass, in IG report on Clinton case. Will Horowitz recommend prosecution? I recommend keeping hopes diminished. Byron York at the Washington Examiner: FBI appears ready to miss another deadline in Trump-Russia probe. The stall continues. Breitbart: Grassley Demands DOJ Explain Redaction of Strzok Text Suggesting Obama White House Ran Probe because of course they did. Also Andrew McCabe's $70,000 conference table. I know some Amish who would make a fine one for a fraction of the cost. John Hinderacker at Powerline: James Comey in Panic Mode. "That’s my interpretation of this tweet, anyway"

Steven G. Calabresi, Northwestern University Opinion on the Constitutionality of Robert Mueller's Appointment. Not.  Retired Special Agent James Wedick at PoliZette: FBI Had No ‘Clear Criminal Predicate’ for Trump Campaign Snoops, but they really wanted to, so they did. Never-Trumper David French at NR: Yes, a Reasonable Prosecutor Would Have Ordered an Investigation of the Trump Campaign "The Mueller investigation should be allowed to reach its natural conclusion, as should the DOJ's investigation of the FBI’s conduct." David von Drehl at WaPo: Mueller has no room for mistakes


Truth be told, Mueller made his own task more difficult by recruiting lawyers to assist him without sufficient concern for their political ties. Admittedly, it’s difficult to practice law at high levels in the United States without compiling a record of political donations. Yet when so many of those donations went to Democrats, we can’t blame Republicans for casting a gimlet eye.

Nor is it fair to expect Republicans to ignore the whiplash of hypocrisy that preceded Mueller’s appointment. On Oct. 19, 2016, during the final debate of the campaign, Democratic nominee Hillary Clinton attacked Trump for refusing to pledge that he would respect the vote totals. “That is not the way our democracy works,” she insisted. “We’ve been around for 240 years. We’ve had free and fair elections. We’ve accepted the outcomes when we may not have liked them, and that is what must be expected of anyone standing on a debate stage.”

Former federal prosecutor and National Review Contributing Editor Andrew C. McCarthy told TheDCNF it was too late for Mueller to claim that the complexity of the case warranted a delay.

“Speedy trial rights belong to the defendant, and if the defendant pushes for a trial within the 70 days, the government has little cause to complain,” McCarthy said. “If the case was too complex, the government had the option of holding off on seeking an indictment until it was ready to proceed to trial. When a prosecutor files an indictment, it is tantamount to saying, ‘We are ready to go.'”

WaPo:  In reversal, Giuliani now says Trump should do interview with Mueller team Just say No!


“I guess I’d rather do the interview. It gets it over with. It makes my client happy,” he said in an interview with The Washington Post. “The safe course you hear every lawyer say is don’t do the interview, and that’s easy to say in the abstract. That’s much harder when you have a client who is the president of the United States and wants to be interviewed.”

Hot Air reads NYT so you don't have to: Flowchart: How The Mueller Investigation Could Play Out For Trump

Exclusive: Bannon says Rosenstein could be fired 'very shortly'. Note that "could" stops well short of "will."

Clapper on, Clapper off: Ann Althouse takes a dim view of Chris Cillizza's claim that "James Clapper did NOT say what Donald Trump keeps saying he said." "A hilarious headline that expresses the end-of-my-rope frustration of anti-Trumpers, from Chris Cillizza at CNN." Bre Peyton at The Federalist: Lying Liar James Clapper Just Lied Again About His Previous Lies About NSA Spying
"'I made a mistake. I didn't lie.'" It's what he is, it's what he does. Paul Mirengoff at Powerline: James Clapper, Leaker, Liar & Sleazeball.

The "science" is not settled: Neal Katyal: Can’t Indict A President? That Could Hurt Trump Wishcasting at the NYT vs. Ben Shaipiro: How The Russia Investigation Helps Trump "And Democrats might just have to come up with a plan for dealing with Trump's policies other than praying for an avenging angel to frog-march him from the White House."

Trump lawyer 'paid by Ukraine' to arrange White House talks. Well, what's the point of having influence if you don't profit from it, especially if you're a sleazy lawyer? But you didn't register as a foreign agent? Just ask now, like Podesta did.


In the press release, city officials recognized Daniels for her "leadership in the #RESIST movement" and noted that the city has previously passed resolutions calling for articles of impeachment to be introduced against President Trump.

To be fair, it is West LA Hollywood.