What's the Point of Having Tenure If It Doesn't Protect Unpopular Opinions?

In the interview, he said research findings by major institutions could not be trusted. “We can no longer trust the scientific organisations like the Australian Institute of Marine Science, even things like the ARC Centre of Excellence for Coral Reef Studies. “The science is coming out not properly checked, tested or replicated, and this is a great shame.” 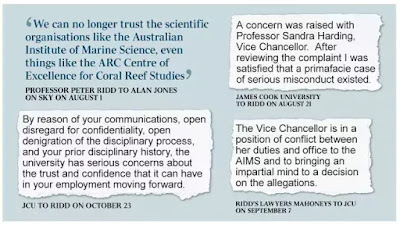 JCU responded in late August by launching a formal investigation for misconduct which could result in Professor Ridd’s employment being terminated.

Professor Ridd engaged legal counsel, with new accusations being made by JCU and Federal Court action being lodged by him.

JCU has said Professor Ridd’s comments were “not in the collegial and academic spirit of the search for knowledge, understanding and truth”. It said his comments had denigrated AIMS and the ARC Centre and were “not respectful and courteous”. In letters lodged with the court, JCU said Professor Ridd’s comments could damage the reputation of AIMS and the university’s relationship with it.

In a letter to JCU on September 7, Professor Ridd’s legal team, ­Mahoneys, called on JCU to drop the case. They said the university suffered a conflict of interest in its investigation. “The vice-chancellor is a council member (akin to a director) of the Australian Institute of Marine Science,” Mahoneys said. “The vice-chancellor is in a position of conflict between her duties and ­office to the AIMS and to bringing an impartial mind to a decision on the allegations (against Professor Ridd).”

JCU responded on September 19 that it was “not satisfied that there has been no serious misconduct or that the allegations are unsubstantiated”. It said Professor Ridd “must not disclose or discuss these matters with the media or in any other public forum”.

In other words, shut up, while we fire you. It's good to know that comments that are “not respectful and courteous” are grounds for breaking tenure and firing a professor. I'm sure we can find plenty of examples to put this principle to good use.

H/T Watts Up With That. A link to his GoFundMe page.

Linked at Pirate's Cove in the weekly "Sorta Blogless Sunday Pinup" and links.
Posted by Fritz at 7:34 PM