One Way to Make Your Student Talk Stand Out 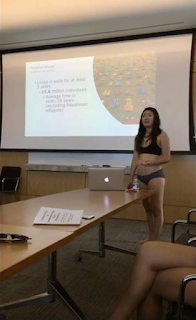 Strip to your underwear lingerie for the presentation: A Cornell Student Gave A Speech In Her Underwear To Protest…Something

From the Cornell Daily Sun:


“The first thing that the professor said to me was ‘is that really what you would wear?’” Chai explained as she detailed what happened when she tried to begin her presentation in her Wednesday section of PMA 3815 Acting in Public: Performance in Everyday Life.
Chai, who had dressed in a blue button down and cutoff jean shorts, said she was stunned.
“I think that I was so taken aback that I didn’t really know how to respond,” she said in an interview with The Sun.
Chai said that the course instructor, Prof. Rebekah Maggor, performing and media arts, went on to say that her shorts were “too short” and that as a speaker she was making a “statement” with the clothes she was wearing…
A male international student in the class made a comment during the discussion that the speaker has a “moral obligation” to her audience to dress conservatively during her thesis presentation, at which point Chai left the room with two students following to comfort her. 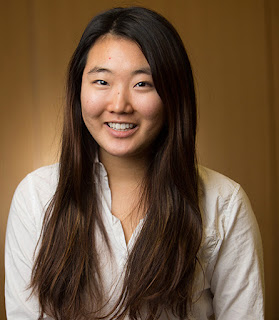 According to a letter written by the other students in the classroom, Chai left the room fairly quickly after the remark about her outfit and so missed the discussion that followed:


Our professor acknowledged the discomfort of speaking overtly about attire and perception, especially for women, and encouraged us to share our thoughts and opinions. Students began discussing their beliefs on the matter. Letitia became visibly upset by our professor’s earlier comments, and after one male international student’s comment (mentioned in her post), she left the room. From the initial comments to Letitia’s exit, only a few minutes had passed, and many people were speaking at once. Tensions were high, and neither our professor nor Letitia was able to adequately defend her position.

The professor asked Chai how she wanted to proceed, at which point the senior decided to strip off her clothes and give her speech in her underwear:

At this point, Maggor asked Chai what she was going to do.
“I’m going to give the best damn speech of my life,” Chai told her.
Chai stripped down to her bra and underwear and walked back into the theatre room, where she performed the entirety of her thesis presentation in the same state of undress.

And, of course, today being the era of the internet, she put the presentation on YouTube:

I don't know her previous speeches, but she did pretty well, for being in her skivvies. No word on her grade.

A lot of grad students have "student dreams" long after graduating, and getting a job. Mine were typically that I was wandering around on campus, looking for a class I hadn't been to all quarter, to take the final exam; oh, and I was either naked, or in underwear. One teacher told me those dreams last longer than combat dreams do in veterans. I can't swear to that, but I don't have them often anymore, now that I'm retired.

I don't think she's going to have them.

I suspect she'll have trouble making it in the private sector, but will make out just fine in the SJW oriented NGO community.

I tried to make it through the whole talk, but got bored despite the girl in her underwear, so it was much as any student presentation.

Wombat-socho has "Rule 5 Sunday: Camille Paglia Approved!" open for business at The Other McCain.
Posted by Fritz at 6:00 AM