The Roiled Waters of Russiagate

Well sure, we filed an indictment. And yeah, we took a victory lap in the big bells-n-whistles Main Justice press conference. But that doesn’t mean we, like, intended to have a trial . . . That seems to be the Justice Department’s position on its mid-February publicity stunt, the indictment of 13 Russians and three Russian businesses for interfering in the 2016 election.

And maybe, just maybe, it's getting worse: Judicial Watch May Get Peek at Redacted Mueller Scope Memo

Because it's hard to set a perjury trap in writing Mueller rejects Trump request to answer questions in writing, so Rudy Guiliani wants parameters of Mueller interview with Trump set by May 17. I know it's been said before but Of Course Trump Should Avoid Talking To Mueller Voluntarily and Take the Fifth If/When Subpoenaed. I still think Trump should demand in interview with Mueller with Mueller under oath.


As in so many other things, Trump was wrong then but was right back in 1990 when he invoked his Fifth Amendment rights almost 100 times during his divorce trial from first wife Ivana. I'm sure that many of Trump's critics who are now saying that taking the Fifth means you're guilty were singing a different tune just a few years ago. When the embattled IRS official Lois Lerner took the Fifth, I don't remember many liberals saying that meant she was guilty. And many conservatives who are today saying the Fifth Amendment is the bulwark of democracy were doubtless singing a different tune in the past as well.


Special counsel Robert Mueller and his deputy Andrew Weissmannfiled a three-page notice on Monday arguing that Alex Van Der Zwaan should not be allowed to file Freedom of Information Act (FOIA) requests related to the ongoing Russia investigation.

As the notice points out, Van Der Zwaan originally agreed to waive his rights to “request or receive” such records from the government during his plea agreement. In the notice, Mueller claims his legal arguments are being filed because the court “drew attention” to a similar waiver agreement during Richard Gates‘ recent arraignment.
. . .
Every law student learns lots of pretty myths about the adversarial nature of the U.S. legal system. Maybe they really are just myths. Mueller doesn’t want a formidable adversary. He wants his targets to lay down and take it. But that’s not how justice should work. Not even–especially–not in the Trump era.

Why not get Judicial Watch to file it for you? CBS Poll: Political Taint On Mueller Probe Now Reaching Majority Level It takes a while for the obvious to penetrate the American skull, but it does penetrate. 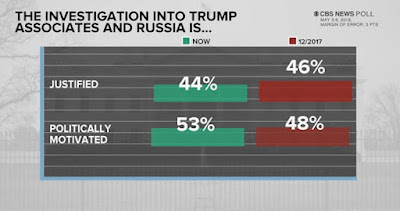 Speaking of which, Michael Cohen Just Mortgaged His Prized Trump Condo in a $9 Million Loan Deal. Stormy Daniels’s Lawyer: Cohen May Have Been Reimbursed For His Payment To Her By A Russian Oligarch

Vox on why Stormy Daniels and Michael Avenatti aren’t bringing down Trump "Stormy Daniels is crowding out Democrats’ 2018 message" There's a message, besides "vote for us, and we'll raise your taxes"? Why The FBI’s Raid On Michael Cohen Sets A Dangerous Precedent


In his increasing desperation, Mueller may manage to finish off the declining reputation of FBI’s Washington office to the degree that there is not much left of it after the work of James Comey, Andrew McCabe, Lisa Page, and Peter Strzok. And he may only fuel more criminal complaints against deep-state bureaucrats who worked at the FBI and the DOJ.


Not only was Mr. Schneiderman a flag-flying feminist, but he had positioned himself at the forefront of the fight against sexual harassment, filing a lawsuit just three months ago against disgraced Hollywood producer Harvey Weinstein.

“We have never seen anything as despicable as what we’ve seen here,” said Mr. Schneiderman at the Feb. 11 press conference.

That was then. On Tuesday, Mr. Schneiderman found himself facing multiple investigations into whether he physically abused four women, allegations he has contested but which led him to resign, his political career in tatters and his legal crusade against President Trump in limbo.
. . .
Still uncertain is the fate of Mr. Schneiderman’s aggressive legal agenda — including his high-profile pursuit of the Trump administration and companies like ExxonMobil, Facebook and Spectrum — as the office begins what could be an extended round of musical chairs.

Schneiderman was being billed as a backstop, in case Trump managed to fire Mueller or otherwise derail the federal process.

You'll be shocked to learn Mensch has cracked the code, and the Schneiderman allegations are a Russian plot to...

No, scratch that, *the entire Me Too movement* is a Russian plot. pic.twitter.com/ypVUOVnQDx
— Alex Govster (@HashtagGriswold) May 8, 2018


Everything is a Russian plot.
Posted by Fritz at 10:11 AM