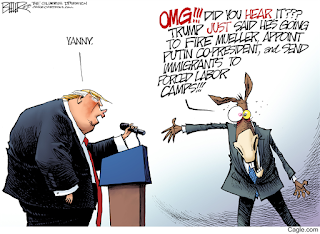 Wow, I thought this was going to be an easy day; boy was I wrong. Cillian Zeal at the Conservatic Tribune,  Newt: Obama and Valerie Jarrett Behind Spying, Trying To Frame Trump, and the same idea being picked up by Daniel John Sobieski at the American Thinker: Jarrett and Obama are Behind Spygate. The suspicion is that anything this egregious would have to go to the highest levels. However, the documentary evidence at this point, like Obama's grades, is sorely lacking. But Obama Admin Officials Coordinated Set Up Of Trump, New Evidence Suggests

The Committee on Homeland Security and Governmental Affairs released new emails on Monday night that allegedly show that Obama administration officials coordinated with each other to help CNN run a damaging story on President-elect Donald Trump based on salacious and unverified information contained in a politically-motivated dossier financed by Trump's political enemies.

The emails, obtained by Sen. Ron Johnson (R-WI), show that the Obama-era officials used coded language to refer to the Steele dossier.

Senator Ron Johnson letter to the FBI regarding Steele dossier. Explosive new e-mails show FBI brass discussed dossier briefing details with CNN. FBI has a hell of a lot of explaining to do. https://t.co/sOlD7gkiHz pic.twitter.com/cUExt5GmgS
— Nick Short 🇺🇸 (@PoliticalShort) May 22, 2018


I find this story amusing and possible, but not compelling. Lee Smith at the Federalist: How The Code Name ‘Crossfire Hurricane’ Undermines The FBI’s Russia Story


Investigation names, say senior U.S. law enforcement officials, are designed to refer to facts, ideas, or people related to the investigation. Sometimes they’re explicit, and other times playful or even allusive. So what did the Russia investigation have to do with World War II, psychedelic drugs, or Keith’s childhood?

The answer may be found in the 1986 Penny Marshall film named after the song, “Jumpin’ Jack Flash.” In the Cold War-era comedy, a quirky bank officer played by Whoopi Goldberg comes to the aid of Jonathan Pryce, who plays a British spy being chased by the KGB.

The code name “Crossfire Hurricane” is therefore most likely a reference to the former British spy whose allegedly Russian-sourced reports on the Trump team’s alleged ties to Russia were used as evidence to secure a Foreign Intelligence Service Act secret warrant on Trump adviser Carter Page in October 2016: ex-MI6 agent Christopher Steele.


"As far as what I have seen to date, it appears that there was an investigation not of the campaign, but of certain individuals who have a history that we should be suspicious of, that predate the presidential campaign of 2015, 2016," Rubio said on "This Week." "And when individuals like that are in the orbit of a major political campaign in America, the FBI, who is in charge of counterintelligence investigations, should look at people like that."


In 2012, FBI counter-intelligence chief Frank Figliuzzi said that Chapman almost caught a senior member of President Barack Obama's cabinet in a honey trap operation. This was reported as a primary motive behind the government's action to round up the ten-person spy ring in which she was a member. The plan reportedly would have involved Chapman seducing her target before extracting information from him. . .Officials from the US Department of Justice claimed that the FBI's concern was that another of the alleged spies, Cynthia Murphy, "had been in contact with a fundraiser and 'personal friend' of Hillary Clinton".

Clarice Feldman at the American Thinker: The Great Unmasking


Four things to understand about SPYGATE:


1) There was no spy in the Trump campaign.
2) The spying that did NOT happen was totally justified.
3) It would be bad for national security to identify the spy who doesn't exist.
4) His name is Stefan.

And an homage to "the retiring NSA director, Admiral Mike Rogers, for courageously standing up against the Obama Administration and the intelligence apparatus, risking all to blow the whistle on the illegal sharing of FISA information on the part of those working to aid Hillary and defeat Trump.  A full timeline of his actions is detailed here: "


The author, Jeff Carlson, is quite obviously correct in his conclusions: "we will never understand what Rogers did for our country," and we would never have known of the spying and FISA violations without him as the intelligence community was caught unaware by the upset presidential race and was working hard to cover up its illegal conduct.

Julie Kelly at American Greatness: The Open Secret of the FBI’s Investigation of Trump’s Campaign pretty well dispels the myth that James Comey helped Trump by not revealing the investigation of Russian collusion before the election. Kathryn Blackhurst at PoliZette: When Do Americans Say It Isn’t Right to ‘Spy on a Campaign’? Usually when it's their ox being gored. Chuck Ross at The Daily Caller, via Director Blue: THE KEY #SPYGATE QUESTION: Who Tasked Agent Halper With Infiltrating the Trump Campaign? The key question for me was whether he was actually trying to gain knowledge, or whether he was planting some as an agent provocateur. You can make a pretty good circumstantial case for the latter. I want him to testify. Gil Gutknecht at Townhall predicts Heads Will Roll, metaphorically, of course. Jeff Carlson, at themarketswork want to know Why  George Papadopoulos is Missing From the Steele Dossier. Fictional plot twists? They couldn't keep their own story straight? Larry O'Connor, the Washington Times: Not so fast Obama, your biggest scandal is unfolding before our eyes. Sundance at the Conservative Tree House: “SpyGate”, The Inspector General, and the Expanded FISA Investigation… notes the incomplete cleaning of the toxic waste in DOJ. "More stuff that Sessions/Horowitz/Huber have known for almost a year can now be made public by letting this guy testify to Congress, The second FBI agent at the center of the Flynn interview which resulted in his charge of lying to Congress.


Going after the taxi king in hopes of proving collusion in the 2016 presidential race is a bank shot, to say the least.

The idea was that, as part of his cooperation, Yohai would dish on Manafort, which would increase pressure on Manafort to plead guilty and dish on Trump, and the end result would be … well, that was unspecified, but it clearly involved expectations of some sort of yet-to-be-exposed wrongdoing on the president's part.

Even the case of Manafort himself, the highest-ranking Trump campaign official to be charged in the Russia investigation, is a bank shot. Manafort faces a long, multi-count indictment focusing on financial crimes he allegedly committed years before and apart from his work on the Trump campaign. The idea is to put so much pressure on Manafort with unrelated charges that he will eventually give up, plead guilty to lesser offenses, and dish on Trump.

That is what Rick Gates, Manafort's partner and the Trump campaign's deputy manager, has already done: pleaded guilty to crimes committed years before and apart from his work on the Trump campaign. Gates is now cooperating with Mueller, although it is not known what information, if any, he has provided about Trump.

The two other campaign figures who have pleaded guilty, Michael Flynn and George Papadopoulos, both admitted lying about Trump campaign-related matters, but not to any crime involving collusion, or conspiracy, or coordination, between the Trump campaign and Russia to fix the 2016 election.

Put it all together, and the impression left by the public parts of the Mueller probe is that Mueller has spent more than a year circling around the basic question of his investigation — Was there collusion? — but not answering it. He has liberally employed the prosecutor's technique of using unrelated charges to pressure targets in hopes of getting damning information on the real issue.

Brendan Kirby at PoliZette:  Law Professor Insists Mueller ‘Has No Clothes’: Federalist Society co-founder Steven Calabresi argues that everything the special counsel has done is 'null and void'.


“All actions taken by Mueller since his appointment on May 17, 2017, are, therefore, null and void,” he said.

That would include all the indictments Mueller has brought, the plea bargains he has negotiated, the controversial searches his team has conducted, and the referral he made of records seized from the home and offices of Trump lawyer Michael Cohen.

Calabresi predicted the courts would throw out any evidence given to the U.S. attorney’s office in Manhattan as the “fruit of a poisonous tree.”

Come to think of it, I don't remember Robert Mueller being confirmed by the Senate either. I suspect this is too easy though, and would leave too many democrats screaming. It's bad enough now.

Playing the long game. Allahpundit at Hot Air. Rudy: To A Large Extent Trump’s Attacks On Russiagate Are About Shaping Public Opinion In Case Of Impeachment Because he knows Mueller is going nowhere on collusion.


This is of a piece with Trump allegedly telling Lesley Stahl that he attacks the media relentlessly so that people will be less likely to believe them when they break bad news about him. It’s not that he’s always wrong in complaining “fake news,” just like he’s not wrong to worry about partisan motives potentially at work in a years-long DOJ investigation of a sitting president. But in both cases the complaints are strategic: They’re designed to preemptively discredit and delegitimize a dangerous enemy who might turn up legitimate evidence of wrongdoing that won’t be nearly as easy to discredit. With the media, it’s about building a case that they’re a fundamentally unreliable narrator. With Mueller, it’s about laying the predicate to move for a mistrial in the court of public opinion if he ends up accusing Trump of a crime.

Paul Rozenzweig at The Atlantic: What Would Actually Happen if Trump Refused a Subpoena?
"If the president does not want to testify in Robert Mueller’s investigation, there simply is no realistic way for the courts to physically force him to do so."

And a delicious irony alert from Breitbart: Mayor Who Honored Stormy Daniels Settled $500,000 Sexual Harassment Claim in 2016 Caught casting stones while living in a glass house.


The Los Angeles Times reported at the time:


A former aide to West Hollywood City Councilman John Duran who sued the city and his boss alleging sexual harassment and wrongful punishment is set to receive $500,000 after settling with both parties earlier this month, according to the agreement obtained by The Times.
Under the terms of the settlement with former City Council deputy Ian Owens, Duran and the city admitted no wrongdoing.