Again we find that redactions DOJ originally demanded in the House report on non-existent Russian collusion were to save DOJ face, not to protect national security: Andrew McCarthy at National Review: Outrageous Redactions to the Russia Report

Well, shortly after the redactions were lifted late on Friday, The Federalist’s Sean Davis got busy on Twitter, posting side-by-side comparisons of the original heavily redacted pages and the new, more transparent version. The disclosures are stunning. I know this will amaze you, but it turns out the redactions had absolutely nothing to do with concerns about the need to protect national security or pending investigations. Instead, the now-unredacted passages: 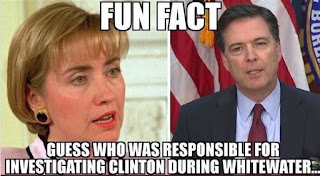 Rush Limbaugh: Unredacted House Intel Report Reveals the Railroading of Michael Flynn, Ace: Surprise! The DOJ's and FBI's Redactions in the Russia Report Had Nothing to Do With Protecting National Security, But Were Instead Only Self-Interested Concealments of Embarrassing Information About Themselves


I don't know about this being Trump's fault. I've thought about this a lot a couple of months ago: If Trump instructs Rosenstein to stop playing games and comply with Congressional subpeonas, what are the odds that Mueller declares this a possible intent to obstruct justice and opens a new avenue of investigation?

He can fire Rosenstein -- but only at the cost of another 18-month-to-2-year investigation.

If it turns out that the whole Trump-Russia “collusion” claim was essentially baseless, the bastard offspring of paranoia and politics, will any of its promoters be held accountable at all? In a healthy polity, they would be.
— Adrian Vermeule (@avermeule) May 7, 2018 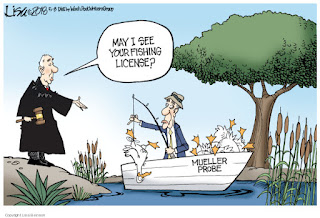 Via Wombat-socho's "In The Mailbox: 05.07.18" Powerline brings us  Mysteries Of The Probe (1) and (2). Elizabeth Foley: Mueller's jurisdiction must be limited Otherwise, he'll continue to just make up stuff as he goes along. Jonathon Turley: Mueller puts politics above the law. Roger L. Simon: Is Robert Mueller Destroying the Democratic Party? That's one optimistic take.  the Dersh: Federal judge rightly rebukes Mueller for questionable tactics. Dr. John at Flopping Aces: Robert Mueller is not a nice man. He is not a good man. He is a pr*ck. Margot Cleveland at the Federalist: Why Paul Manafort Will Lose In Court—And So Will Robert Mueller.  Kathryn Blackhust at Polizette: Trump Doesn’t ‘Have to’ Comply with Mueller Subpoena says Rudi.


Noting that Bill Clinton “did testify before the grand jury,” Stephanopoulos asked Giuliani if Trump would be “willing to do that.” “But only for two and a half hours, only with an arranged format. Would we be willing to do that? I would rather have the Hillary Clinton treatment,” Giuliani said. “No, [Bill Clinton] was two and a half hours in the grand jury, approximately, maybe three … But Hillary Clinton treatment is what I’m looking for. And that is no under oath, only a Q&A, and then we get the questions in advance, and they write the report two weeks before.”

Joe DiGenova: Using Grand Jury Subpoena to Get Testimony from Trump About Firing Comey Is ‘Unconstitutional’ “A use of a grand jury subpoena to get testimony from a president about the official act of firing the FBI director is unconstitutional, illegal, and the president should fight it all the way to the Supreme Court,” Trump: I’m not obstructing justice, I'm 'fighting back' EBL: Whose Side Is Attorney General Jeff Sessions On?

Ace's Morning Report: Unmitigated Chutz-pocrisy Dept: Rosensteinpenis Sez "Central Lesson of the Holocaust" is the "Importance of Enforcing Rule of Law" Yep, Hitler had a lot of laws. 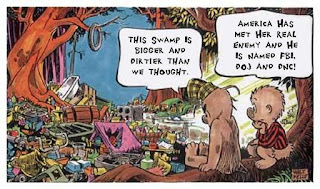 Axios: Behind the Trump n' Rudy show, Washington Post: Giuliani pleased with his media tour: ‘Everybody’s reacting to us now’, David Marcus at the Federalist: Rudy Giuliani Knows Exactly What He’s Doing "Former federal prosecutor and New York City Mayor Rudy Giuliani has a simple message to Robert Mueller: Put up or shut up," Politico: Trump grows frustrated with Giuliani as Stormy Daniels drama rages on They assume he want it to calm down. Why? His popularity keeps rising.  American Thinker: Rudy versus Mueller: Round Two


Every American billionaire knows perfectly well that as soon as he gets on Forbes's list, a target is drawn on his forehead. This billionaire must hire a lot of lawyers to continually fight off numerous women, a vast majority of whom he does not even know.

If the threat to the billionaire comes from a lady with whom there was no sex, the amount to be paid is about 100,000 dollars.  It's like a tax on air. If you want to live, you pay.  After all, in America, it's easier to pay $100,000 than to spend many millions on a lawsuit. It will be costly and last for years, and it can severely damage your reputation even if you are innocent.

If the threat comes from a lady with whom you had sex, the amount of the payment depends on whether she has witnesses or not.  This comes at a higher cost – the second level of extortion. Typically, in such cases, you pay about ten times more than in the previous example – a million dollars or more.

Finally, on the third level, if the threat comes from a lady with whom a child was born, the amount is increased ten times more.  It's about tens of millions of dollars. It is on these sums that the predatory female industry on American billionaires is based. 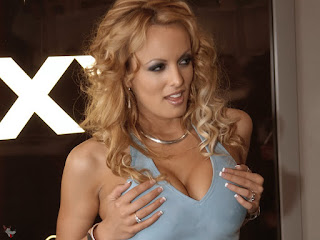 So Stormy was slightly overpaid for not having sex? Hot Air: Stormy Daniels’s Lawyer Makes Stuff Up About Probe Into Trump’s Lawyer and  “View” Panelist: Let’s Face It, Stormy Daniels Hurt Her Credibility With That “SNL” Cameo


Don’t forget, by Daniels’s own admission, what kept her interested in Trump in 2007 was him telling her that he might be able to land her a gig as a contestant on “The Apprentice.” From the beginning she saw him as a conduit to greater fame. It took her 11 years but she finally parlayed her relationship with him into an appearance on a hit NBC show.

Wombat-socho has "Rule 5 Sunday: Camille Paglia Approved!" and "FMJRA 2.0: High Energy Protons" open for business at The Other McCain.
Posted by Fritz at 10:17 AM