The Last Days of the Blue-Blood Harvest

Horseshoe crabs are sometimes called “living fossils” because they have been around in some form for more than 450 million years. In this time, the Earth has gone through multiple major ice ages, a Great Dying, the formation and subsequent breaking up of Pangaea, and an asteroid impact that killed the dinosaurs and most of life on Earth yet again. In other words, horseshoe crabs have truly seen some shit.

Yet, I would conjecture, some of their strangest experiences must have come in just the past few decades, as one of the soft-bodied mammals that came after dinosaurs began using their hands to scoop horseshoe crabs out of the ocean en masse. Contemporary humans do not deliberately kill the horseshoe crabs—as did previous centuries of farmers catching them for fertilizer or fishermen using them as bait. Instead, they scrub the crabs clean of barnacles, fold their hinged carapaces, and stick stainless steel needles into a soft, weak spot, in order to draw blood. Horseshoe crab blood runs blue and opaque, like antifreeze mixed with milk. 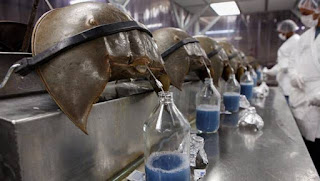 I take issue with some of this. Horseshoe crabs are currently as bait for eels and conch. But onward.


And for what exactly do humans need the blood of a living fossil? A sort of witchcraft, you might say, for it literally keeps people alive. Horseshoe-crab blood is exquisitely sensitive to toxins from bacteria. It is used to test for contamination during the manufacture of anything that might go inside the human body: every shot, every IV drip, and every implanted medical device.

So reliant is the modern biomedical industry on this blood that the disappearance of horseshoe crabs would instantly cripple it. And in recent years, horseshoe crabs, particularly in Asia, have come under a number of threats: habitat loss as seawalls replace the beaches where they spawn, pollution, overfishing for use as food and bait. Horseshoe crabs bled for the biomedical use in the United States are returned to the ocean, but an estimated 50,000 also die in the process every year.

Which sounds bad, but is probably not a big problem for the coast wide population. And what becomes of the blood?


A standard test at the time—and now—is LAL, which stands for limulus amebocyte lysate. Limulus refers to Limulus polyphemus, the species of horseshoe crab native to the Atlantic coast of North America. Amebocyte refers to cells in the crab’s blood. And lysate is the material freed from the cells once they have been “lysed” or broken. This is the stuff exquisitely sensitive to bacterial toxins.

But can you find out what in the blood causes the reaction, and duplicate it in a test tube, and save the crabs? Turns out you can!


The horseshoe crab’s sensitivity to bacterial toxins unfortunately also made it a pain to study. The toxins, it turns out, are everywhere—in water, in test tubes, in petri dishes. “You have to bake all bakeable glassware at 200 to 220 degrees for several hours.” says Ding. They also had to buy special water that had been treated to be bacterial toxin free. If you weren’t careful, your tube of solution could easily turn to gel.

When Ding and Ho finally identified the gene for factor C, they spliced it into yeast. That failed because while the yeast made factor C, it did not secrete the molecule. “The yeast was very difficult to break open. It was very impure and messy,” she says. They tried another type of yeast and mammalian cells—those failed too. In the late 1990s, Ding and Ho attended a course in the United States and learned about baculovirus vector systems. Here, a virus is used to insert the factor C into insect gut cells, turning them into little factories for the molecule. Insects and horseshoes have a shared evolutionary lineage: They’re both arthropods. And these cells worked marvelously.

Finally, a decade and a half after she began, Ding had an alternative to LAL that worked without harming any more horseshoe crabs. She cooped herself up in the library to study patents and drafted the application herself. Then she sent it off and waited for the world to change. 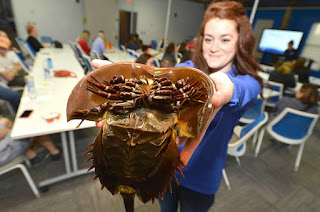 But now, having a way to test for toxins without killing horseshoe crabs, the pharmaceutical industry was slow to adopt it:


The world did not change, at least not for the horseshoe crabs. It took three years for the first recombinant factor C test kit based on Ding’s patent to come out in 2003, but even then pharmaceutical companies showed little interest.

The companies had a number of reasons. There was only one supplier of the kit, a company that today is part of the Switzerland-based chemicals company Lonza. Pharmaceutical companies were wary of relying on a single source for such an important part of their manufacturing. What if something happened to Lonza? Or a natural disaster hit its production plant? Companies that bleed crabs also stand to lose a lot of money if factor C becomes adopted widely. Of the six companies with crab-bleeding facilities in the United States, two declined interviews, one did not respond to an interview request, and two have virtually no public presence. The sixth is Lonza, which currently sells both LAL and the recombinant factor.

Lonza, for its part, blamed the slow uptake on regulations. In the United States, the FDA tells companies carrying out bacterial-toxin tests to follow the United States Pharmacopeia, a handbook that lays out drug standards. In a 2012 guidance, the FDA said companies could use recombinant factor C, which does not appear in the Pharmacopeia, if they carried out their own validation tests. “The risk is, of course, the FDA may not accept your validation and you can’t bring your product to market,” says Lonza’s spokesperson Katrin Hoeck. “Pharmaceutical companies are risk-averse.” It took the industry decades to move from rabbits to LAL, too.

I wonder if anti-GMO fever had anything to do with it? But it does seem to be changing:


Recently, however, a few things have changed the recent risk-reward calculus for pharmaceutical companies. For one, Lonza is no longer the sole supplier. In 2013, Hyglos became the second company to make recombinant factor C. Kevin Williams, a senior scientist at Hyglos, says he sees as a long overdue modernization: Pharmaceutical companies stopped relying on pigs and started making insulin in yeast and bacterial cells decades ago. Why can’t the same technology be applied to the very test used to check that insulin is safe for injection?

On the regulatory side, the European Pharmacopoeia added recombinant factor C as an accepted bacterial-toxin test in 2016, paving the way for change in the United States. A number of pharmaceutical companies, most notably Eli Lilly, have compared the effectiveness of recombinant factor C and LAL.

Jay Bolden, an expert in bacterial toxin detection at Eli Lilly, recalls Lonza coming in their labs with the recombinant factor C kit over a decade ago. He was intrigued at the time but not yet willing to take the plunge. The turning point came in 2013, when Eli Lilly began planning an insulin-manufacturing facility in China, where the native horseshoe-crab species has been declining. “You would hear things about someday the horseshoe crab might get restricted,” says Bolden. In contrast, the supply chain for recombinant factor C looked more secure with both Hyglos and Lonza as suppliers. LAL and factor C are also comparable in cost.

We have a fair number of Horseshoe Crabs here in the Chesapeake Bay, though nothing like the masses that come up on the Atlantic shore beaches to spawn. We see a few spawn on the beach, but mostly we find their cast off shells after they shed to grow.

Wombat-socho has "Rule 5 Sunday: Hockey Girls" up and ready for action.
Posted by Fritz at 6:22 PM