But it's in the UK, so it will be a few years before Judge Ginsburg allows it in the US: Lesbian mum who viciously beat bride walks free after telling court she has high levels of "male hormones"

A lesbian mother who subjected her bride to a vicious beating has walked free after telling a court she has a medical condition which leaves sufferers with high levels of "male hormones."

Louanne Budgen, 33, had a petulant meltdown at wife of 18 months Hayley for leaving a Christmas family gathering early at 9pm so she could put their three children to bed.

Three hours after Hayley left her at the bash, Budgen turned up drunk at the couple's marital home in Radclife, Greater Manchester, asked for money to pay a taxi then dragged the victim from their bed by her hair.

She then punched Hayley in the head 'at least five times' before storming out of their bedroom.

Hayley who is in her 30s suffered pain and minor bruising and called in police following the attack in the moments before Christmas Day last year. 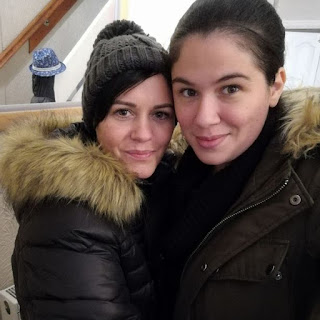 At Manchester magistrates court, Budgen wept as she admitted assault but walked free after she blamed her behaviour on domestic abuse she had witnessed as a child.

She said she also suffers with Polycystic Ovary Syndrome which affects the way her ovaries work.

Despite Hayley's initial statement to police, the couple have since reconciled.
. . .
Budgen was ordered to complete a 12 month community order and pay £170 in costs.

District judge Samuel Goozee, told her: "You have clearly had some trauma in your own upbringing and have been exposed to abuse, but you need to understand what you did to Hayley.

I guess only men are strong enough to be expected to be resistant to the effects of testosterone.