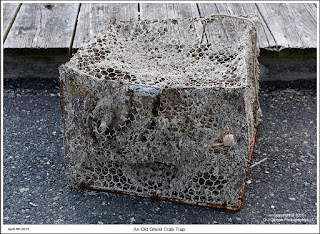 But not before creating a controversy: Scientists Disagree on Lost Gear, Crab Data in Chesapeake Bay


Last year, a scientific report put some astounding numbers to crab pots lost by watermen and the subsequent economic loss when they become death traps for crabs that wander in and can't escape.

Now, a committee of federal and state crab scientists say those numbers were overestimated.

Behind your pile of steaming Chesapeake Bay blue crabs are teams of scientists working hard to make sure there's enough out there to harvest. Back in 2016, a group of scientists from William & Mary's Virginia Institute of Marine Science said the Chesapeake Bay regional industry was losing millions of dollars worth of crabs to derelict crab pots, also called ghost pots.
. . .
"From the spatial model that was used, to the data inputs, to the assumptions that were made is that at every step of the way it created an overestimate in both the number of pots and the number of crabs that were caught within those pots," Davis admits.

Using the worst case scenario for every possible variable is pretty common in first runs at environmental concerns. Unfortunately, the exaggerated dangers that get produced are the ones that tend to get put forward to the press,to "heighten awareness" of the problem, and then spur legislative action (see global warming as a prime example).


Kirk Havens, Director of the Coastal Watersheds Program for VIMS, is one of the scientists who conducted the study and co-authored the derelict crab pot report.  "There has been some discussion amongst the managers on how big an impact the annual loss of 3 million crabs due to the derelict pots could have on the overall population of crabs in the bay," Havens said. “It's probably relatively small compared to the overall population of crabs which is in the hundreds of millions, but it is a known loss of market-sized crabs that can be managed."

But once the data is out, it's hard to take it back. In this case, the VIMS data has been used to market a solution to derelict crab pots-- biodegradable panels that would dissolve and leave an escape hole. Havens and his team are the inventors. A Richmond-based entrepreneur bought the license from William & Mary and began producing the panels, using the VIMS data to market them. State Senator Monty Mason sponsored a bill to mandate biodegradable panels earlier this year and also used the data to gain support.

That caught the attention of Daniel Knott, the waterman we interviewed for our previous story who was trying out the panels. "You can see how brittle they become," Knott said as he snapped pieces of the panel. "They all failed, failed at different levels and at a pretty good cost of time and energy to fix the pots once these panels started failing."

Of course, they're designed to fail; that's the point, that after long enough in the water, these panels are supposed to fall apart, and allow crabs and other critters to leave the pots, and not continue to catch and kill them.


Cost was also a factor. These particular biodegrable panels cost upwards of $1.50 per pot compared to the ten cent plastic cull rings they were using. Mason's bill required two per pot. Knott wrote several senators with his concerns. The bill was defeated. But Senator Mason says he'll keep working on the problem, even if the VIMS data is off. "When is the problem going to be significant enough for us to address it," Mason wondered? "It's still a problem. It's not as big as we thought, but over year, after year, after year it adds up, so we need to focus on addressing it and that will come. "It's just a matter of when.”

Three bucks a pot doesn't seem too high to me; a couple of crabs can make that up and catch effort could be adjusted upward to account for the crabs saved, but the panels should be designed to last at least one season, to save the watermen from having expensive failures in the field, and the problem of replacing them in the field as they fail.
Posted by Fritz at 6:37 PM