Starting off with an odd one, that I've only seen at Aces (and his source at the paywalled NYT obviously): McCabe Suspected Rosenstein Was Part of RUSSIA Plot to Fire Comey; Wrote His Own Memo About It, Which He (Of Course) Gave to Meuller

SCOOP: McCabe feared that Rosenstein helped provide Trump with cover story for Comey firing. Wrote his own memo about it and later gave it to Mueller. w/@adamgoldmanNYT @mattapuzzo https://t.co/GkCSAkKJgj
— Michael S. Schmidt (@nytmike) May 30, 2018


In the document, whose contents have not been previously reported, Mr. McCabe described a conversation at the Justice Department with the deputy attorney general, Rod J. Rosenstein, in the chaotic days last May after Mr. Comey’s abrupt firing. Mr. Rosenstein played a key role in the dismissal, writing a memo that rebuked Mr. Comey over his handling of an investigation into Hillary Clinton.

But in the meeting at the Justice Department, Mr. Rosenstein added a new detail: He said the president had originally asked him to reference Russia in his memo, the people familiar with the conversation said. Mr. Rosenstein did not elaborate on what Mr. Trump had wanted him to say.

To Mr. McCabe, that seemed like possible evidence that Mr. Comey’s firing was actually related to the F.B.I.’s investigation into the Trump campaign’s ties to Russia, and that Mr. Rosenstein helped provide a cover story by writing about the Clinton investigation.

Well you might not have to be a paranoid fanatacist to be in the upper levels of the FBI, but it's certainly no bar. The big stir today is caused by Trey Gowdy:  Republicans distance themselves from Trump’s ‘Spygate’ conspiracy theory,  Come On, The FBI Didn’t “Spy” On Trump


“When the FBI comes into contact with information about what a foreign government may be doing in our election cycle, I think they have an obligation to run it out,” said Gowdy on “CBS This Morning” on Wednesday.

He added, “Based on what I have seen, I don’t know what the FBI could have done or should have done other than run out a lead that someone loosely connected with the campaign was making assertions about Russia, I would think you would want the FBI to find out whether there was any validity to what those people were saying.” …

Umm, no. To me, it all comes down to whether Professors Misfud, and Halper were acting as neutral information gatherers or as agent provocateurs for MI6 and Brennans FBI. I think it could easily go either way. Misfud was in the news yesterday. Via Ace: Lee Smith: Who Is Joseph Misfud? Is He a Russian Agent -- or a CIA Agent? Real Clear Investigations: The Maltese Phantom of Russiagate:


In an official report, Democrats on the House Permanent Select Committee on Intelligence asserted that “in their approach to Papadopoulos, the Russians used common tradecraft and employed a cut-out,” a “Kremlin-linked…Maltese professor named Joseph Mifsud.”

No one in the American intelligence community has publicly challenged this description.

But there is one major problem with this story: No evidence has been presented to support the claim. Although Mifsud has traveled many times to Russia and has contacts with Russian academics, his closest public ties are to Western governments, politicians, and institutions, including the CIA, FBI and British intelligence services. One of Mifsud’s jobs has been to train diplomats, police officers, and intelligence officers at schools in London and Rome, where he lived and worked over the last dozen years.
. . .
In interviews with RealClearInvestigations, Roh and Pastor said Mifsud is anything but a Russian spy. Rather, he is more likely a Western intelligence asset. 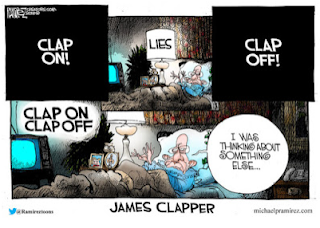 Gateway Pundit: REVEALED: Joseph Mifsud – The Man Who Set Up Papadopoulos – Is Member of Soros-Funded European Council on Foreign Relations So yeah, he could be an agent provocateur. Salient facts: The tangled web around Joseph Mifsud, Dr. John at Flopping Aces: The Russia investigation was opened on a lie. It is all a lie.


I find the fact that Downer sought out Papadopoulos extremely interesting. That dovetails with what I have been saying all along. It was a set-up.

Via Sam Clovis, Stefan Halper contacts Papadopoulos and lures him to England, where he presses Papadopoulos for information on the Clinton emails (fed to him by Josef Mifsud) and has a young woman flirt with Papadopoulos. That woman contact was instrumental in fabricating charges against Papadopoulos. Halper is said to have been irritated by Papadopoulos’ lack of knowledge about the emails.

The FBI scares Papadopoulos into lying about not doing anything illegal. They nail him and squeeze him for dirt on Trump that was fed to Papadopoulos by Mifsud and which Stefan Halper tried to extract from Papadopoulos.

It’s almost as if the Mueller framed Papadopoulos out of spite.

The basis for opening the investigation was a fraud. The FISA warrant was based on a lie. It was all a lie. What we really need to hear testimony from Rob Goldstone, Josef Mifsud and Stefan Halper.

Ace's AM rant from yesterday: 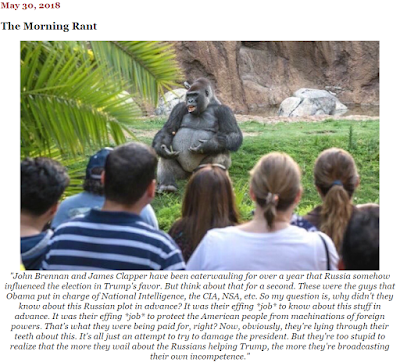 Apprently, the  Special Prosecutor Counsel is planning on special prosecuting counseling the President for thinking about something he didn't do: WaPo: Robert Mueller’s obstruction of justice probe is bigger than we realized. Yeah, the mandate apparently covers thought crime:  Report: Sessions Is Key Witness in Mueller Inquiry into Trump Obstruction

During a March 2017 meeting at Mar-a-Lago, President Trump asked Sessions to unrecuse himself from the collusion probe — a request the Attorney General declined.

“The confrontation, which has not been previously reported, is being investigated by the special counsel, Robert S. Mueller III, as are the president’s public and private attacks on Mr. Sessions and efforts to get him to resign. Mr. Trump dwelled on the recusal for months, according to confidants and current and former administration officials who described his behavior toward the attorney general,” reports the New York Times.

From Axios: Trump: I wish I didn't pick Jeff Sessions as attorney general


Rep. Trey Gowdy, “I don’t think so, I think what the President is doing is expressing frustration that Attorney General Sessions should have shared these reasons for recusal before he took the job, not afterward. If I were the President and I picked someone to be the country’s chief law enforcement officer, and they told me later, ‘oh by the way I’m not going to be able to participate in the most important case in the office, I would be frustrated too...and that’s how I read that - Senator Sessions, why didn’t you tell me before I picked you. There are lots of really good lawyers in the country, he could have picked somebody else!” And I wish I did! — President Trump's three Wednesday morning tweets


How exactly does this constitute obstruction of justice? Sessions reports directly to Trump, who has the authority to make such demands, even if they are bad ideas. Bad ideas do not in and of themselves constitute obstruction of justice. Even if this took place as the NYT describes, the fact that Sessions refused the demand and remained in the job is a pretty clear indicator that the intent was not to obstruct the probe. Trump could have fired him at any time, which might have been more problematic, but didn’t.

Amelia Thomson-DeVeaux at FiveThirtyEight: What Would Happen If Trump Fires Rosenstein? She doesn't know either but she got some column inches out of it anyway.

Chris Pandolfo at the Conservative Review: Up-Chuck Schumer orders media to cover up ‘Spygate’ They don't take orders, but they do follow suggestions.


As National Review’s Andy McCarthy points out in his column from the weekend, the spy name game is a distraction from the real question: On what grounds did the Obama administration begin a counterintelligence investigation using “police state tactics” against the Trump campaign?

“In the end, it is not about who the spies are. It is about why they were spying,” McCarthy writes.

Rushbo: Comey and Clapper Are Out Covering Up Spygate. Both would look good better in orange, don't you think? Francis Menton at the Manhattan Contrarian: "Russia": Bona Fide Basis For Investigation Or Preposterous Cover Story? Reminder: FBI Redacted Cost of McCabe's Office Conference Table: $70,000. How much more embarrassing but non-vital crap are they hiding?

Prosecutors in Michael Cohen case piecing together shredded documents from raid Remind me to shred a few random telephone books and miscellaneous garbage before the FBI raid me.


The attorney representing adult film actress Stormy Daniels against President Donald Trump’s former personal attorney Michael Cohen has to end his “publicity tour” to be allowed to participate in the federal case Cohen is currently facing, the judge overseeing the matter said during a Wednesday hearing.
U.S. District Judge Kimba Wood heard arguments from Daniels’s attorney, Michael Avenatti, as well as representatives for Cohen and Trump, over whether Avenatti would be allowed to participate in the case. Daniels, whose real name is Stephanie Clifford, has also filed a suit against Cohen, claiming a nondisclosure agreement she struck with Trump is null and void.
Avenatti would have to stop claiming publicly that Cohen is guilty so as not to taint a potential jury, Wood said. "I say 'publicity tour' not in a derogatory sense,” she said. "You're entitled to publicity, I can’t stop you. Unless you’re participating in a matter before me."

Chaser: Avenatti Withdraws Motion To Represent Stormy Daniels In Cohen Case In NY. So I guess he decided publicity was more important than his client.
Posted by Fritz at 9:19 AM