Streif at Red State reviews Judge Ellis' interactions with Mueller on the Manafort prosecution. It's a bit of a slog, but worth it. Basically, Mueller's team told him "You want the truth? You can't handle the truth" Special Counsel To Judge: You Don’t Have The Authority To Review What We’re Doing or more succinctly put by Clarice Feldman: Judge Ellis Wants to See Mueller's Hunting License: 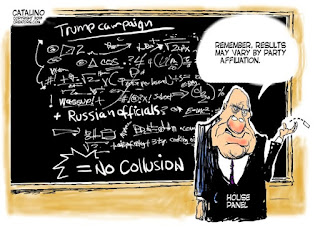 
I can't in my lifetime remember when a case of this import featured a judge calling the prosecutor a liar from the bench. This is a landmark moment.

Actually, I do remember when courts called the prosecution liars in cases of great import. Unfortunately, they were both post-conviction. A three-judge panel of the D.C. court conceded that Judith Miller had been tricked by the special prosecutor in the Libby case into giving false testimony against the defendant, and DOJ attorneys and FBI agents were found to have engaged in numerous unethical and illegal acts before Judge Sullivan in the Ted Stevens prosecution. The link to all three cases is the partisan use of the law as a political weapon by lawyers and FBI agents in government employ.

Michael Walsh: In No Apparent Rush, the Grand Inquisitor Plods On. Insty: “THE VALUE OF THE SWORD OF DAMOCLES IS THAT IT HANGS, NOT THAT IT FALLS:”. The Wall Street Journal: Mueller Probe Might Have to Go Dark for Midterm Election. That's a feature, not a bug for Democrats and their allies. Steve Hilton: Mueller probe is a political counter-revolution to overthrow Trump -- It must be defeated


Think back to the investigation’s origins. It was set up after President Trump fired FBI Director James Comey and told NBC’s Lester Holt that it was because of the “Russia thing.”

Where did the “Russia thing” itself begin? The Hillary Clinton campaign.

The Clinton campaign paid for the dodgy dossier that tried to smear the Trump campaign for supposedly colluding with Russia to win the election. When that didn’t work – Clinton lost the election anyway – her supporters jumped on the “Russia thing” as the reason for her defeat.

You can imagine the supporters all saying: How could she possibly lose to him? There had to be foul play!

Because, of course, it couldn’t possibly be the case that Clinton lost the election on the merits – that working Americans were sick of the policy failures of the establishment and wanted a change from the disastrous elitism of the last few decades.

Althouse: Dershowitz versus Mueller and Painter.


I'm seeing this billed as a Dershowitz "melt down," but I think Painter is the one who creates the tension by interrupting Dershowitz and introducing the accusation of lying.

More Dersh:  Dems ‘Prepared To Eliminate Civil Liberties’ To Get Trump – I’m Also Critical Of GOP On This. 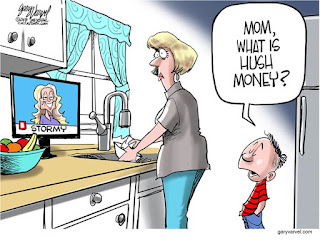 David Leonhardt: How Giuliani Helps Mueller,  ABC News: Trump could take the 5th Amendment or not comply with subpoena to testify: Rudy Giuliani "President Trump said on Friday he would "love to speak" to Mueller but would only do it on the condition he is "treated fairly."" So it ain't likely. Allahpundit: Rudy On Trump And Cohen: Other Women Might Have Been Paid Off If It Was Necessary, This is my shocked face. Billy Graham's Son: God Put Trump in Office. Giuliani on Judge Jeanine: Trump's reimbursement of payment violates no law. It's not illegal to pay blackmailers. But that doesn't make it a good idea.

Apparently not: Inevitable: Stormy Daniels Turns Up On SNL

Nunes wants asleep at the switch Sessions held in contempt for refusing to comply with subpoena amid FISA abuse concerns. Well, it sort of worked with Rosenstein?

The enduring scandal: The Mystery of Michael Flynn’s Guilty Plea - He pleaded guilty to a crime FBI agents said he didn’t commit.


On pages 53-54, the report notes that in March 2017 “Director Comey testified to the Committee that ‘the agents . . . discerned no physical indications of deception. They didn’t see any change in posture, in tone, in inflection, in eye contact. They saw nothing that indicated to them that he knew he was lying to them.’” The quotes are from the committee transcript of Mr. Comey’s remarks.

The report goes on to say that then Deputy FBI Director Andrew McCabe “confirmed the interviewing agent’s initial impression and stated that the ‘conundrum that we faced on their return from the interview is that although [the agents] didn’t detect deception in the statements that he made in the interview . . . the statements were inconsistent with our understanding of the conversation that he had actually had with the ambassador.’”

Recall that the inconsistency concerned whether Mr. Flynn had discussed U.S. sanctions against Russia with the Russian ambassador to the U.S. Vice President Mike Pence had said publicly that Mr. Flynn had not discussed sanctions, and once it came to light that he had, Mr. Flynn resigned.
. . .
All of this relates to the mystery of why Mr. Flynn pleaded guilty to making false statements. It made little sense for him to lie since as a seasoned intelligence officer he would know the U.S. eavesdrops on the Russian ambassador. He also willingly sat for the FBI interview with no legal counsel, suggesting he felt no risk in doing so.

Certainly the statements about the FBI agent’s impression of Mr. Flynn would not have helped Mr. Mueller’s case at trial had Mr. Flynn not pleaded guilty. The plea deal noted that Mr. Flynn’s sentence would depend on his “assistance in the investigation,” and perhaps Mr. Flynn felt he lacked the money to defend himself in court. He also may have wanted to spare his son, whom Mr. Mueller was also targeting.

In any case it is a dubious practice for a prosecutor to force a cooperating witness to plead guilty to a crime he didn’t commit. Perhaps Mr. Flynn is supplying testimony behind the scenes that puts all of this in a better light, but the facts on the public record to date don’t reflect well on Mr. Mueller’s prosecutorial tactics toward Mr. Flynn.

The House report also reflects poorly on Mr. Comey’s credibility. Despite the transcript of his testimony, Mr. Comey at least three times on his book tour has denied telling Congress that the FBI agents did not think Mr. Flynn was lying. “Did you tell lawmakers that FBI agents didn’t believe former national security adviser Michael Flynn was lying intentionally to investigators?” Fox News’ Bret Baier asked Mr. Comey on April 26.

“No,” Mr. Comey replied, adding that “I didn’t believe that and didn’t say that.” Asked a similar question by NBC’s Chuck Todd, Mr. Comey responded, “Not true. And I don’t know what people heard me say, if they’re reporting it accurately, what they heard me say, they misunderstood. But that’s not accurate.”

Perhaps Mr. Comey’s memory is faulty, as happens with human beings, though then he might commiserate with Mr. Flynn. On the other hand, Mr. Comey has jailed many Americans for false statements to the FBI, with no accommodation for mistakes of memory.

Wombat-socho has "Rule 5 Sunday: Camille Paglia Approved!" and "FMJRA 2.0: High Energy Protons" open for business at The Other McCain.
Posted by Fritz at 9:29 AM