Can Phragmites Save the Bay?

We're all acquainted with the argument that the robust Yellow Peril Asian invasive form of Phragmites (compared to wussy Canadian/American subspecies) is a danger to the Bay, and other places in the US, by virtue of it's competitiveness:


Phragmites is an extremely aggressive grass species; it targets disturbed marshes that have been altered from their original state by natural or anthropogenic causes. After a disturbance event, such as Hurricane Sandy, many marshes are altered significantly by having soil washed away or having trees and plants torn from the marsh itself.

This creates an ideal situation for Phragmites to establish itself in the disturbed marsh system. This can happen when seeds land on a disturbed marsh or living sections of root wash onto the marsh, creating new plants. Once a small population is established, the plant will reproduce via wind seed dispersal or more commonly, by extending its rhizome – a horizontally growing root that grows laterally and adventitious roots.

These can grow into a new area of the marsh and create new plants off the extended rhizome. A major problem with Phragmites is it will continue to expand throughout the marsh until the marsh is a monoculture of Phragmites. Monocultures decrease the overall health of marsh by reducing biodiversity, changing marsh hydrology and nutrient cycles, increasing fire risk and decreasing productivity compared to mixed vegetation marshes.

But now we see that the invasive form of Phrag may be the salvation of the Bay in the face of global sea level rise!


In conditions with high nitrogen availability, Phragmites absorbed three times more carbon than native plants. The excess of nitrogen in our waterways, allows the invasive strain to grow for a longer period of time and create more chlorophyll – the green pigment necessary for plants to photosynthesize.

Invasive Phragmites also builds up more soil below the ground compared to the native. This will help protect marshes from sea- level rise and erosion.

As we continue our battle with Phragmites, it is imperative to consider: What is more important – a diverse species of wetland plants or a marsh that helps combat sea-level rise?

In the future, compromises may be possible in which invasive Phragmites are allowed to remain in marshes that are more vulnerable to sea-level rise.

Further studies may be necessary to determine whether the benefits of invasive Phragmites outweigh the costs.

Go ahead and kill the invasive weed. I ain't worried: 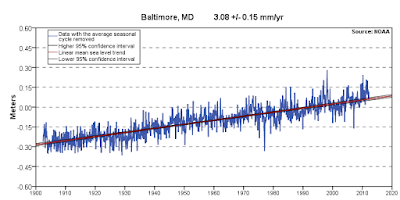 Do you see any evidence of an acceleration of sea level rise coincident with the rise in CO2?