A Final Straw from Clinton.com?

One of the classified email chains discovered on Hillary Clinton’s personal unsecured server discussed an Afghan national’s ties to the CIA and a report that he was on the agency’s payroll, a U.S. government official with knowledge of the document told Fox News.

The discussion of a foreign national working with the U.S. government raises security implications – an executive order signed by President Obama said such unauthorized disclosures are “presumed to cause damage to the national security."

The U.S. government official said the Clinton email exchange, which referred to a New York Times report, was among 29 classified emails recently provided to congressional committees with specific clearances to review them. In that batch were 22 “top secret” exchanges deemed too damaging to national security to release.

So what's a Clinton  do, claim, "We already knew that, and anyway, too much stuff is classified"


Based on the timing and other details, the email chain likely refers to either an October 2009 Times story that identified Afghan national Ahmed Wali Karzai, the half-brother of then-Afghan president Hamid Karzai, as a person who received “regular payments from the Central Intelligence Agency” -- or an August 2010 Times story that identified Karzai aide Mohammed Zia Salehi as being on the CIA payroll. Ahmed Wali Karzai was murdered during a 2011 shoot-out, a killing later claimed by the Taliban.

Did she get an American spy killed? Only Hillary knows for sure. She simply can't be trusted to keep national secrets secret, if it makes her life complicated enough to carry two devices.


While the Clinton campaign claims the government classification review has gone too far, Executive Order 13526, in a section called "classification standards,” says, "the unauthorized disclosure of foreign government information is presumed to cause damage to the national security."


Conservative watchdog group Citizens United is calling on the State Department and the Clinton Foundation to turn over details about Bill Clinton’s invitation to a North Korea-connected event in 2012, amid Pyongyang’s latest escalation of its nuclear weapons program.

The North Korean request to Bill Clinton was included in a collection of State Department emails obtained by Citizens United through a public records request last year. The emails concern Bill Clinton’s paid foreign speaking engagements, which had to be approved by the State Department.

But the State Department has yet to release a May 2012 email attachment that contained details about the North Korea invitation, according to Citizens United. The group is calling on the State Department and the Clinton Foundation to turn over the document, in light of the Kim Jong-Un regime’s increasingly aggressive nuclear testing.

Could we find out how much the Norks offered to pay Bill, Hill and Chillsee?


The Secret Service wouldn't let Hillary Clinton out of her car for a few minutes outside the building where a rally was held in Bronzeville Wednesday because there was a rogue drone making them nervous.

The alleged pilot, who was standing across the street, was questioned by agents.


Donors also voiced some frustration with the lack of media scrutiny of Mr. Sanders, who they said was essentially getting a pass. They pressed Mr. Mook to demonstrate that the Vermont senator’s policy proposals were entirely implausible promises and that his responses to essentially all substantive questions drew on excerpts of his stump speech and rants about the “millionaires and billionaires.”

Heh! You shall reap as you have sown.

Well, when in doubt, call America sexist for not supporting you!


But I think there still is a very deep set of concerns that people have, which very often they’re not even aware of or they couldn’t articulate. There’s nothing overt about it in most instances. People are very convinced they want to vote for the right person. And then . . . you know, you get little hints that maybe they’re not as comfortable with a woman being in an executive position. Especially in a big, rough-and-tumble setting like New York City or the United States of America.

The problem couldn't be you.

The People's Cube offers an alternative idea to Flopping Ace's assertion the Hillary's coughing fit is a symptom of pulmonary embolism; Satan is trying to free himself from Hillary's body. 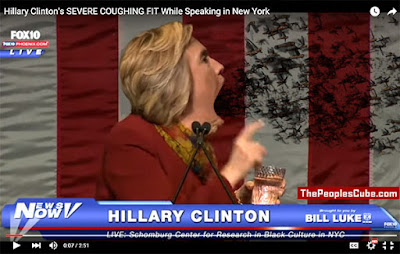