My Alma Mater Has the Blues

Or rather, the blue. Scientists at Oregon State University invent a new blue pigment:

OSU chemist Mas Subramanian and his team were experimenting with new materials that could be used in electronics applications and they mixed manganese oxide – which is black in color – with other chemicals and heated them in a furnace to nearly 2,000 degrees Fahrenheit. One of their samples turned out to be a vivid blue. Oregon State graduate student Andrew Smith initially made these samples to study their electrical properties.

“It was serendipity, actually; a happy, accidental discovery,” Subramanian said.

The new pigment is formed by a unique crystal structure that allows the manganese ions to absorb red and green wavelengths of light, while only reflecting blue. The vibrant blue is so durable, and its compounds are so stable – even in oil and water – that the color does not fade.

These characteristics make the new pigment versatile for a variety of commercial products. Used in paints, for example, they can help keep buildings cool by reflecting infrared light. Better yet, Subramanian said, none of the pigment’s ingredients are toxic.

OSU has reached an exclusive licensing agreement for the pigment, which is known as “YInMn” blue, with The Shepherd Color Company. It will be used in a wide range of coatings and plastics. 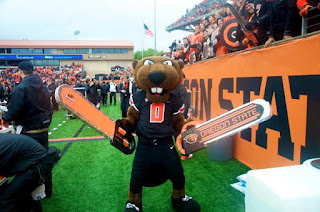 I would have suggested "Benny's Blue" after the school mascot, Benny the Beaver.

It's kind of cool that scientists can still find something new and useful by mixing a few chemicals and baking them in an oven.