Scientists Fess Up: We're Not All Gonna Drown

It's actually amazing this is being "printed" by the Bay Program; it's an admission against their own usual line of alarmist BA about how rising sea level is going to overwhelm the Bay, but hopefully not before they get their grants renewed. 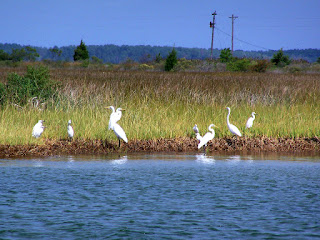 
Climate change is expected to bring a multitude of changes to the Chesapeake Bay region, including a rise in sea levels. As waters rise, marshes and wetlands are predicted to be overcome by water and disappear faster than wetland plants can move to higher ground, meaning a loss of important habitat that traps pollution and provides food and shelter to fish, shellfish and birds.

But the VIMS study suggests that salt marshes—coastal wetlands that are flooded and drained by salt water brought in by tides—may be able to persist through processes that allow the marshes to grow vertically and migrate inland. According to the report, more frequent flooding brings more mud into the salt marsh, raising the soil and encouraging the growth of common marsh plants. 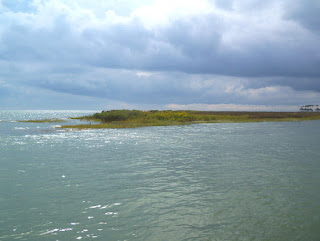 It's true, marsh plants grow slower as they get further above the water level (and drier), and faster, up to a point, as the water gets deeper.


The researchers emphasize, however, the importance of allowing salt marshes to migrate inland—and that marshes are unable to migrate into areas blocked by coastal cliffs or hardened shorelines. Nearly 20 percent of the Chesapeake Bay’s shoreline is hardened by riprap, seawalls and other structures.

The study, “Overestimation of marsh vulnerability to sea level rise,” is published in Nature Climate Change.

We've known this for years. Scientists have been collecting sediment cores tens of meters long, showing  salt marsh vegetation all the way to the bottom. It doesn't take a genius to understand what that implies. While there was some question of the ability of salt marsh to keep up with rapid sea level rise, remember, there is no evidence for accelerated sea level rise in the last 100 years:

It's certainly true that paved or otherwise fixed surfaces can't rise with rising waters; a road in our community built on sinking fill and close to the Bay is, not surprisingly, flooded more often than when it was first laid down in the 1930s.
Posted by Fritz at 5:56 PM