Better Late than Never at Clinton.com

Errands today kept me from getting to it early today. 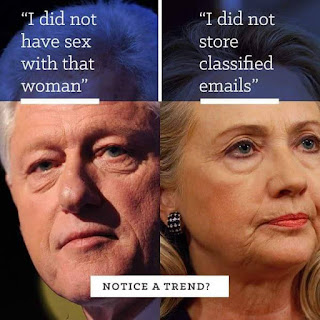 The email scandal gets another boost as Documents suggest State Dept. asked Clinton to delete classified emails. The whole scandal suggests that the State Dept. doesn't take security very seriously compared to other agencies. The State Dept found a new way to pass off a release of more emails State Dept. to release 550 Clinton emails over Presidents Day weekend. I wonder who drew that short straw and had to work on a three day weekend. You know, they say that two people can keep a secret if one of them is dead, but this "Top Clinton aides also handled ‘top secret’ intel on server," is ridiculous:


At least a dozen email accounts handled the “top secret” intelligence that was found on Hillary Clinton’s server and recently deemed too damaging for national security to release, a U.S. government official close to the review told Fox News.

The official said the accounts include not only Clinton’s but those of top aides – including Cheryl Mills, Huma Abedin, Jake Sullivan and Philippe Reines – as well as State Department Under Secretary for Management Patrick F. Kennedy and others. There is no public evidence they were authorized to receive the intelligence some of which was beyond Top Secret.

Via Wombat-socho's "In The Mailbox, 02.11.16" and Weasel Zippers, Carl Bernstein knows a scandal when he sees it:  ‘Vast Right-Wing Conspiracy’ Didn’t Put Hillary’s Server ‘In Her Damn Closet.’ But I'm surprised she hasn't tried that yet. But we have months to go.


. . . Hillary Clinton is who she has always been, and she has never had any charisma. What the Democrats are betting, really, is that they won’t need charisma in November. Their ideal scenario would be for the Democrats to nominate Hillary, Jeb Bush to get the Republican nomination and Donald Trump to run a third-party populist campaign, so that the Clintons can slither back into the White House on a 43-percent plurality the way Bill did it in 1992. . . 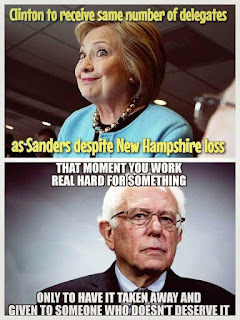 . . . as Clinton allies grapple with crushing loss. Expect the gun, race and gender cards to be played early and often from now on. But good news for Hillary; thanks to the democrat's "stupor delegates" Clinton likely to leave NH with same number of delegates as Sanders. Why bother to vote?

According to Jay Carney Obama wants Clinton to win, but is not likely to endorse her for fear of weighing her down. However, the Congressional Black Caucus is not as savvy: Congressional Black Caucus to formally endorse Clinton on Thursday. But, Here's Why Black People Should Think Twice Before Voting For Hillary Clinton. Mostly all the wrong reasons, as you might expect from HuffPo. Will Nevada save Hillary from Bernie? According to Michael Tomasky, maybe not. Donors think Hillary needs to sharpen up for the next debate: Donors seek Clinton comeback, sharper message before debate with Sanders. Maybe cut down on the booze a little? Money talks. Victor Davis Hanson reviews Hillary and concludes it takes the Willing Suspension of Disbelief to support Hillary.

Hillary’s henchwomen have a dirty secret


When Madeleine Albright and Gloria Steinem tried to shame and bully young women into supporting Hillary Clinton, they inadvertently revealed a dirty secret of the left’s fixation on gender, race and ethnicity.

They demonstrated that hiding behind the gauzy appeals to make history is a willingness to use brass knuckles to achieve conformity. In their warped vision, biology trumps individuality, and those who don’t agree are traitors to their gender. 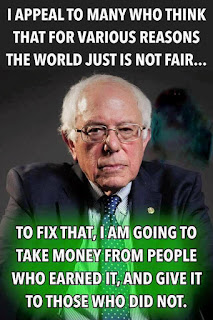 Acid tongued iconoclast lesbian liberal Camille Paglia burst the feminist Hillary bubble “Sexism has nothing to do with it”: Camille Paglia on Hillary Clinton, Gloria Steinem — and why New Hampshire women broke for Bernie Sanders.


Never mind that the woman elevated to Christ Redeemer status by Steinem and Albright has a stained and tattered rap sheet five miles long. What genuine principles does Hillary have left, after a public career so light on concrete achievement and so heavy with lies and greed? Yes, she’s been handed job after job, but primarily due to her very unfeminist association with a man. As a senator, she initiated nothing of substance, and as Secretary of State, she stumbled into one disastrous fiasco after another, escalating the destabilization of North Africa and the Mideast.

The democrats have become the official party of socialism; it's just that simple.