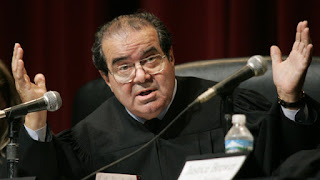 Scalia died in his sleep during a hunting trip in Texas, after telling friends Friday night that he didn’t feel well.

He was the longest-serving current justice on the Supreme Court. He was appointed by President Ronald Reagan in 1986.
. . .
A federal official who asked not to be named told the San Antonio Express-News that there was no evidence of foul play, and it appeared that Scalia died of natural causes, either Friday night or Saturday morning.

Friends in the hunting party checked on him in his room at a ranch where they were staying when he did not appear for breakfast Saturday morning.

This certainly raises the stakes in the next presidential election.


UPDATE: McConnell: No vote on Scalia replacement under Obama. I'll believe it after it happens.
Posted by Fritz at 6:54 PM