Notes from Clinton.com on a Snowy Saturday

20 F and snowing off and on here, with winds sustained 20 kts and gusting to 30 from the north. A great day to stay indoors.

Leading off the segment on the ongoing email scandal, and brought to you fresh from Wombat-socho's "Friday Night With In The Mailbox: 02.12.16", Obama’s Intel Chief Says Hillary Should Withdraw From Presidential Race. Let's roll the video:

The poor State Department: An Entire Agency Poisoned By Clinton’s Disregard For Security. I understand why the Department has to keep delaying and confusticating the investigation of this. First, Obama, that master of transparency is their boss, and second, if they don't show support for their bosses, present and past, no sane person would ever agree to Secretary of State again. But the scandal seems destined to keep oozing pus as State Dept. won't rule out more 'top secret' Clinton emails. In fact, it's likely that the juiciest ones are being saved to dribble out when they'll get the least attention. Another batch is supposed to come out today.

I was also reminded by Wombat's post of this new Ted Cruz ad:

Bravo! You know you've stuck bone when Andrea Mitchell and Chuck Todd are Appalled By Cruz’s ‘Vicious’ Office Space Parody. Democrat hacks with bylines. Speaking of which, it did not go unnoticed that at the last democratic debate (if you can call it that), Obama biographer Gwen Ifill, and Clinton Foundation donor Judy Woodruff (both of whom read the news for PBS) failed to Ask Hillary About Clinton Foundation or the email scandal.

One might remember other email scandals in the government, say how EPA administrator Lisa Jackson kept a account under an assumed name 'Richard Windsor', for the purpose of contacting friendly NGOs and avoiding FOIA requests. It turns out that she is a Clinton Foundation board member.

Clinton Foundation donor and Bill Clinton confident Jeffrey Epstein got a sweetheart deal from the feds according to records just release.


The secret deal — signed without notifying more than 30 of Epstein’s underage victims — saved Epstein from facing federal charges that could have resulted in extensive prison time for sexually abusing girls at his Palm Beach mansion from 1999 to 2007, documents show. 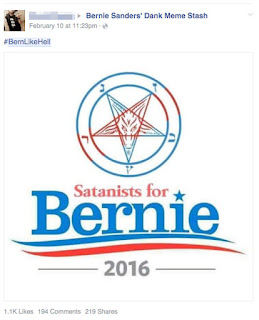 Madeleine Albright climbs down off her hobby horse and admits that maybe women who don't support Clinton don't deserve their own circle of Hell.  Maybe just a little corner. Speaking of Hell, though, how can you lose, when your main opponent has friends like these: ‘BERN LIKE HELL’: SATANISTS RALLY BEHIND SOCIALIST BERNIE SANDERS. It might even be legit. Places where Socialists get into power pretty much become the anterooms of Hell.  In a portent that must send chills to Hillary's bone, GOP shifting gen-elex oppo efforts to Sanders? Hillary prepares to bury Bernie with money, Super PAC moves to ramp up financial firepower for Clinton, thereby proving his point. The DNC got into the act and rolls back Obama ban on contributions from federal lobbyists. Hmm, I wonder where most of that money will go. Can Bernie win the hearts, minds and dollarsof black voters? Reihan Salam of NRO doesn't think so: Why Black Voters Are Sticking With Clinton. 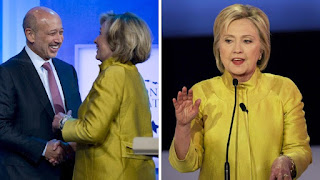 And last, and probably least, what is it with Hillary and the ugliest dresses imaginable? Hillary wore yellow debate jacket when meeting Goldman Sachs CEO. My own theory is that the dinners were to feature hot dogs, to show her affinity with the common folk, and she was afraid that, half brain damaged as she is, she would dribble mustard.