Gunrunning Democrat Headed to the Hoosegow 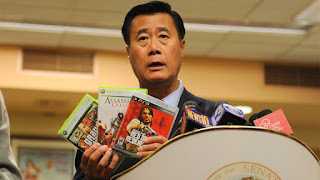 
We’ll take a moment today to note the imminent relocation of a legend of American politics. Younger readers might not even recall the name, but former California state senator Leland Yee is back in the news. Who is Leland Yee? He was an infamous gun control advocate in San Francisco who was running for state Secretary of State a few years back and found himself in severe need of campaign cash. Rather than following the usual path of wheedling dollars out of politically connected cronies with deep pockets, Yee took a much more direct and capitalist approach. He decided to jump into the black market weapons game and try to sell some rocket launchers to foreign interests. (Among other gun running activities.)

That didn’t work out so well for Yee and he was soon arrested. And now, after a long and winding court saga, he’s heading to jail. (L.A. Times)


Wednesday, after decades as an elected officeholder, he was sentenced to five years in prison for doing political favors in exchange for campaign cash — or, as the judge put it — for selling his vote.
During an hourlong hearing, Yee implored U.S. District Judge Charles Breyer to be lenient. Standing at a lectern near his lawyers, Yee said he had taken responsibility for his crimes and knew that he had shamed himself and hurt his family, his supporters and others…
“It must be that the public has trust in the integrity of the institution, and Mr. Yee, you abused that trust,” Breyer said. “You showed you did not have integrity in your actions.”
The five-year sentence was within the term recommended by federal sentencing guidelines. Prosecutors had sought eight years. They said that Yee had received tens of thousands of dollars in campaign contributions in exchange for favors and that he admitted he knew his actions were illegal.

Yee was certainly one of the more entertaining characters on the American political stage, at least once you got past the dangerous and horrific nature of his crimes. If it weren’t for him the country never would have heard of “Shrimp Boy” Chow, which remains one of the all time great gangster names in the nation’s history. But the former state senator was also a great object lesson in how the Democrats do business and how the media covers them. Even this week, with all the legal formalities concluded, the press couldn’t get Gov. Jerry Brown, Senate leader Kevin de León or most of the rest of the state Democratic leadership to offer so much as a comment on the sentencing. It was just too much of an embarrassment to the party.

Five years sounds a little short. It's not like this was a trivial offense, and the fact that he was running guns to a drug dealer and mob boss seems like sufficient exacerbating circumstances for a longer sentence. I'm sure the prosecutors could have found several more felonies had they shown the kind of imagination that, say, Travis County prosecutors, who charged Gov. Perry of Texas for the heinous felony of exercising his office's right to veto.

Not to mention, hypocrisy factor of a pro gun control democrat participating in illegal arms traffic.
Posted by Fritz at 6:22 PM