DOJ Closing in on Clinton.com?

Slow progress on the email front as Attorney General Lynch admitted that Justice Dept. lawyers are are starting to look into the issue of the home baked server:

Attorney General Loretta Lynch confirmed to Congress Wednesday that career Justice Department attorneys are working with FBI agents on the criminal investigation of Hillary Clinton’s email practices and the handling of classified material.

Legal experts say the assignment of career Justice Department attorneys to the case shows the FBI probe has progressed beyond the initial referral, or "matured," giving agents access to the U.S. government’s full investigative tool box, including subpoena power for individuals, business or phone records, as well as witnesses.
. . .
She confirmed that the FBI criminal investigation is ongoing, and no recommendation or referral on possible charges had been made to her.
. . .
“As a general matter, a U.S. attorney is assigned as an FBI investigation progresses. The partnership with the U.S. attorney allows the FBI to use the investigation tools of the U.S. government, including subpoenas for evidence, business or phone records, as well as witnesses. And you need (a) U.S. attorney to convene a grand jury.”

Judicial watch, whose FOIA suits have been instrumental in bringing the story to the public (as well as far more successful than congressional efforts) has promised to bring the 30,000 or so deleted "personal" emails out into the open:


All of the roughly 30,000 personal emails Hillary Clinton claimed to have deleted from her private email server will eventually be reviewed by the government — and many will be made public, according to a top legal adversary of Clinton.

“They’re all going to get reviewed eventually, despite Mrs. Clinton’s resistance,” Tom Fitton, the head of the conservative legal watchdog organization Judicial Watch, said in an interview with The Hill.

Clinton has said she “chose not to keep” roughly half of her server’s email cache because the 30,000 personal emails contained information about “yoga routines,” “family vacations” and “condolence notes.”

We'll see how much of this was yoga rountines and Chelsea's wedding plans, and how much was the Clinton Foundation offering State Dept. services for a price.

The New York Time actually had the temerity to call for Hillary to release the transcripts of her Wall Street speeches.  Clinton deflected calls to release Wall St. speech transcripts with a demand that the entire country all the Republican candidates do so first. I don't know about you, but I'm getting the feeling she thinks she has something to hide.


A vote for the scandal-plagued Hillary is a resounding ratification of business as usual–the corrupt marriage of big money and machine politics, practiced by the Clintons with the zest of Boss Tweed, the gluttonous czar of New York’s ruthless Tammany Hall in the 1870s.  What you also get with Hillary is a confused hawkish interventionism that has already dangerously destabilized North Africa and the Mideast.  This is someone who declared her candidacy on April 12, 2015 via an email and slick video and then dragged her feet on making a formal statement of her presidential policies and goals until her pollsters had slapped together a crib list of what would push the right buttons.  This isn’t leadership; it’s pandering.

Sanders himself joined in the fun:


Democratic presidential hopeful Bernie Sanders, who’s complained about having “the kitchen sink” thrown at him, unloaded on Hillary Clinton here Thursday night, ticking off a series of issues on which he said the former secretary of state had taken the wrong position.

The Vermont senator attacked Clinton for having accepted campaign contributions and speaking fees from Wall Street interests. And then he sharply criticized her support, as first lady and as a New York senator, of welfare reform, free trade, an anti-gay rights bill and the Iraq War — all measures he opposed during his long career in Congress.

Of course, Bernie did, in fact support the war in two votes. But don't expect to see that in the NYT or the Post. The reason Bernie has so many followers among young people is that many of them have nothing better to do: Bernie Supporters’ Hatred Of Work Is Why Trump Supporters Are So Mad

Nothing I love more than some red on red action. Black Lives Matter Activists Interrupt Hillary Clinton At Private Event In South Carolina because back in the 90s Hillary said something bad about criminals, and the BLM people assume they had to be black. The laws that resulted during the First Clinton reign did result in disproportionate impact on blacks. This brought an uncommon Hillary apology, for calling them "Super Predators", when the were merely ordinary criminals and thugs.

Hillary doesn't know the difference between the Declaration of Independence and the Constitution of the United States, although I suspect she has officially sworn allegiance to the latter more than once. Hillary on guns: There’s a Constitutional right to life, liberty, and the pursuit of happiness, too. You'd think with all that money she could be a copy and browse it.

Far from hoping for Trump as a campaign opponent, it would appear the Clintons are starting to sweat about a Clinton/Trump match up:  Clinton Fans Now Fret They May Get What They Wished For: Trump. According to Democrat with a byline Chuck Todd: Hillary Will ‘Long For The Days Of Ken Starr When Running Against Trump.’ 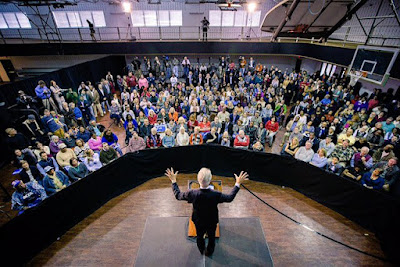 Brought to you via Wombat-socho's "In the Mailbox: 02.25.16" Hillary Clinton slaps down talk of GOP Gov. Brian Sandoval for SCOTUS, who denied interest in the position. It was just a head fake anyway.

Here's What the Hillary Campaign Thinks of the American Flag: 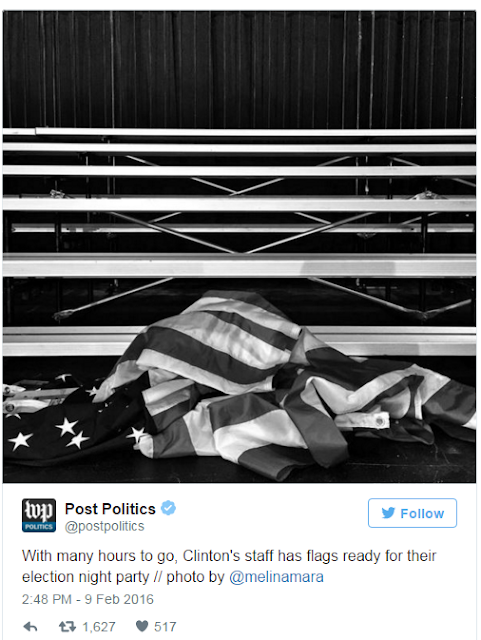 I don't think that's going to play well in Peoria.

And with a little help from Kelly Clarkson:


The Way Hillary Lies
Oh Hillary, We All Know The Way You Lie
Posted by Townhall Video on Thursday, February 25, 2016