The state of Maryland has filed an appeal with the Commonwealth of Virginia calling for an official review of a recent Virginia Department of Environmental Quality decision to approve a coal ash water discharge permit for Dominion Virginia Power. That permit would authorize the release of potentially toxic pollutants into Quantico Creek and the Potomac River. The appeal will go before the Circuit Court for the City of Richmond.

“We look forward to working with Virginia on additional safeguards and monitoring protocols for the river. The Commonwealth has followed basic requirements and worked hard to include measures that will help but Maryland believes more can be done, particularly if our two states work together,” Secretary Grumbles said.

“Maryland’s Department of the Environment and Department of Natural Resources are focusing on metals in the ash, water quality monitoring in the river, where freshwater and saltwater are mixing, and additional measures for the closure of the ash ponds, including the types of protective liners and ground water monitoring wells,” added Secretary Grumbles.

Maryland called for the review to ensure that the discharge of pollutants from the Dominion Virginia Power plant, located at Possum Point, along Quantico Creek, does not adversely impact the sensitive ecosystem of the Potomac River watershed.

In January 2016, the Maryland Department of Natural Resources outlined its potential concerns with the Dominion permit in an eight-page letter detailing several serious points on the potential negative impact to human health and aquatic life, including the vast array of diverse fish species that live or pass through the river basin and the Chesapeake Bay.

I have done research on the two pollutants most at issue here, arsenic and selenium, and I believe it's safe to say it would be better to treat this water and empty these ponds, which are attractive to wildlife, than to let them sit while environmentalists argue over the most expensive and impractical means of emptying them.

However, Maryland does have an important stake in the health of the Potomac River, which by a treaty from before the Revolutionary War, is all under Maryland's control. The actual dumping would probably take place in Quantico Creek, which while under Virginia control, emptied immediately into the tidal Potomac.

However, I'd also like to point out a little propaganda effort in this notice from MDDNR, a photo of the Potomac River from well above the tidal area around Quantico Creek, making it look much smaller and more vulnerable: 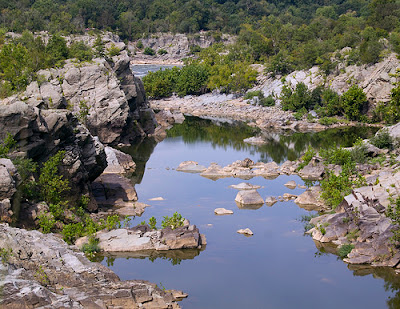 Versus how it really is: 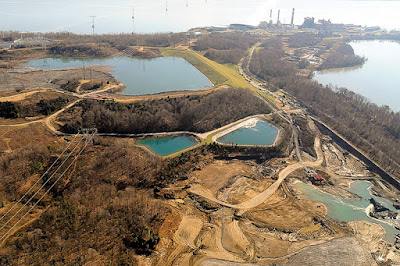