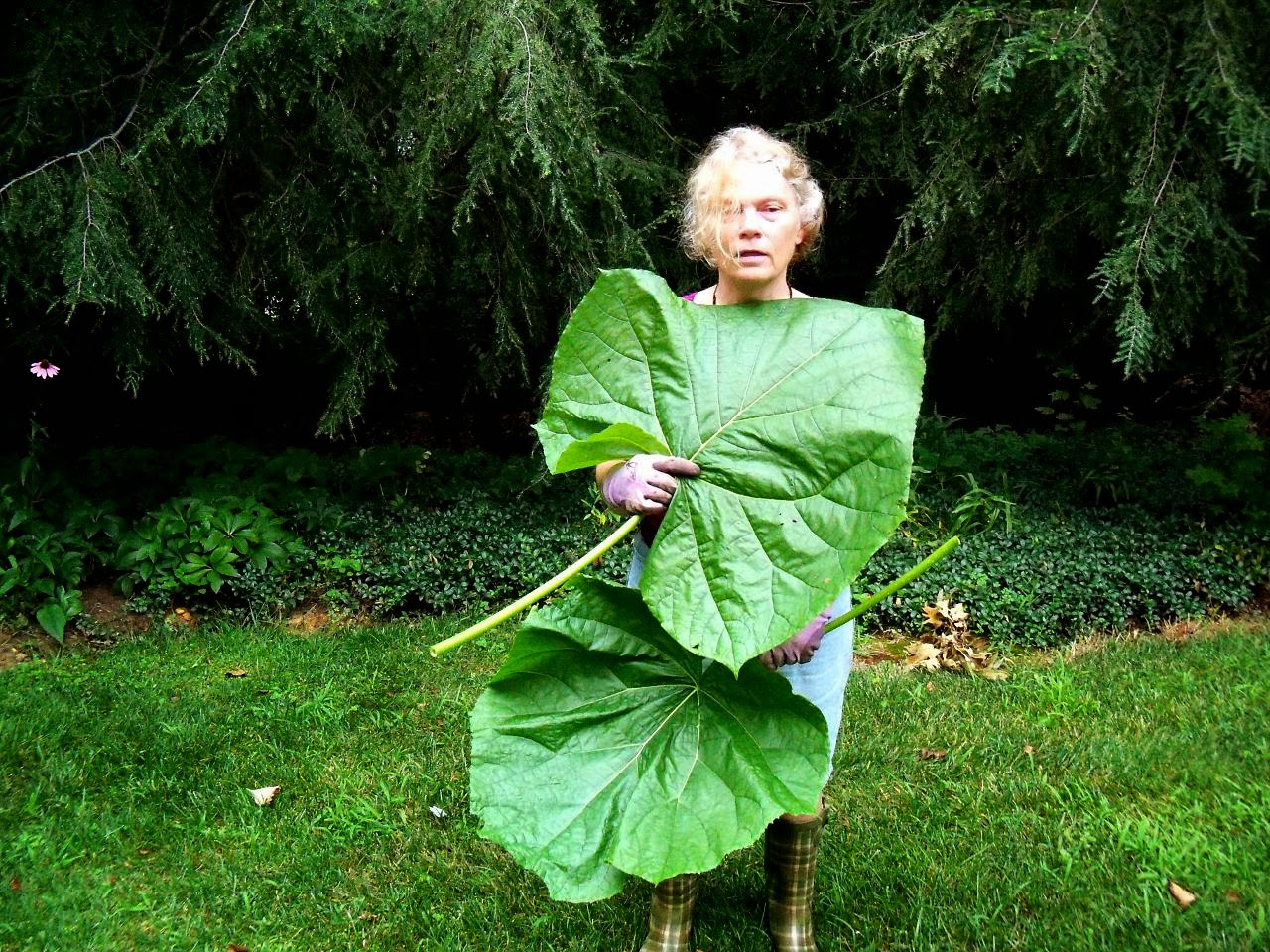 You may remember in yesterday's beach post, I said it had just started to rain? That was an understatement. Shortly after I finished, the sky opened up and we got 2 inches of rain in 20 minutes. Really. Of course, I immediately checked the boat to make sure it survived the drenching, and it had, thanks to a new bilge pump and some maintenance. 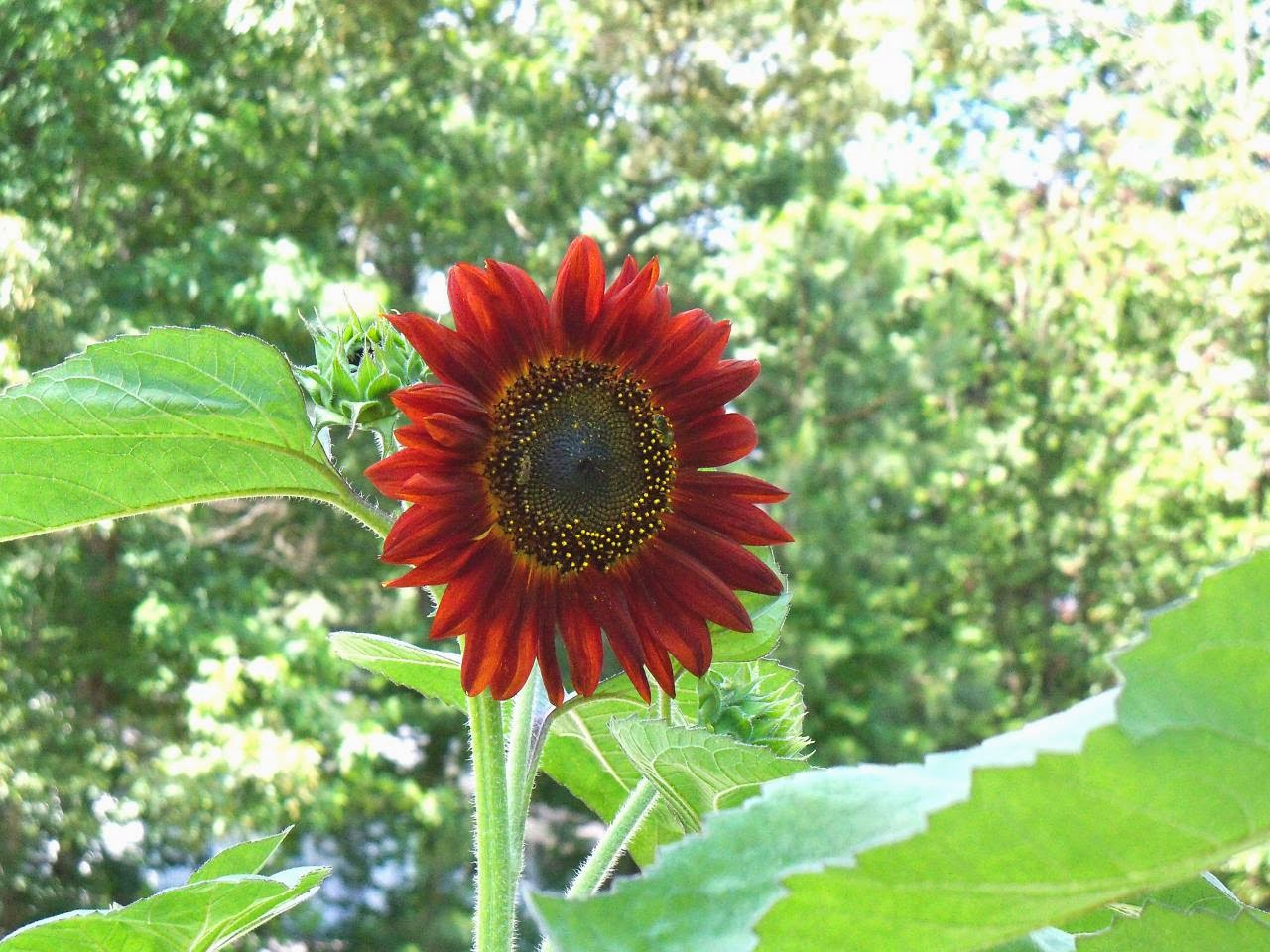 It was only this morning we noticed that a Paulownia tree in the back 2 was leaning dangerously over the back fence.

Paulownia, the Empress Tree, has a very large leaf (see above), especially the new vigorous shoots.  I spent a good portion of this morning figuring out how to lop off the branches overhead so that I could take down the rest of the tree sort of safely.  I tied off the offending limb to the fence, used my pruning pole saw to get rid of the majority of the foliage, and then tied the trunk (about 8 inch diameter) back to a big tree so it couldn't fall on the fence, and took it down with the chain saw. 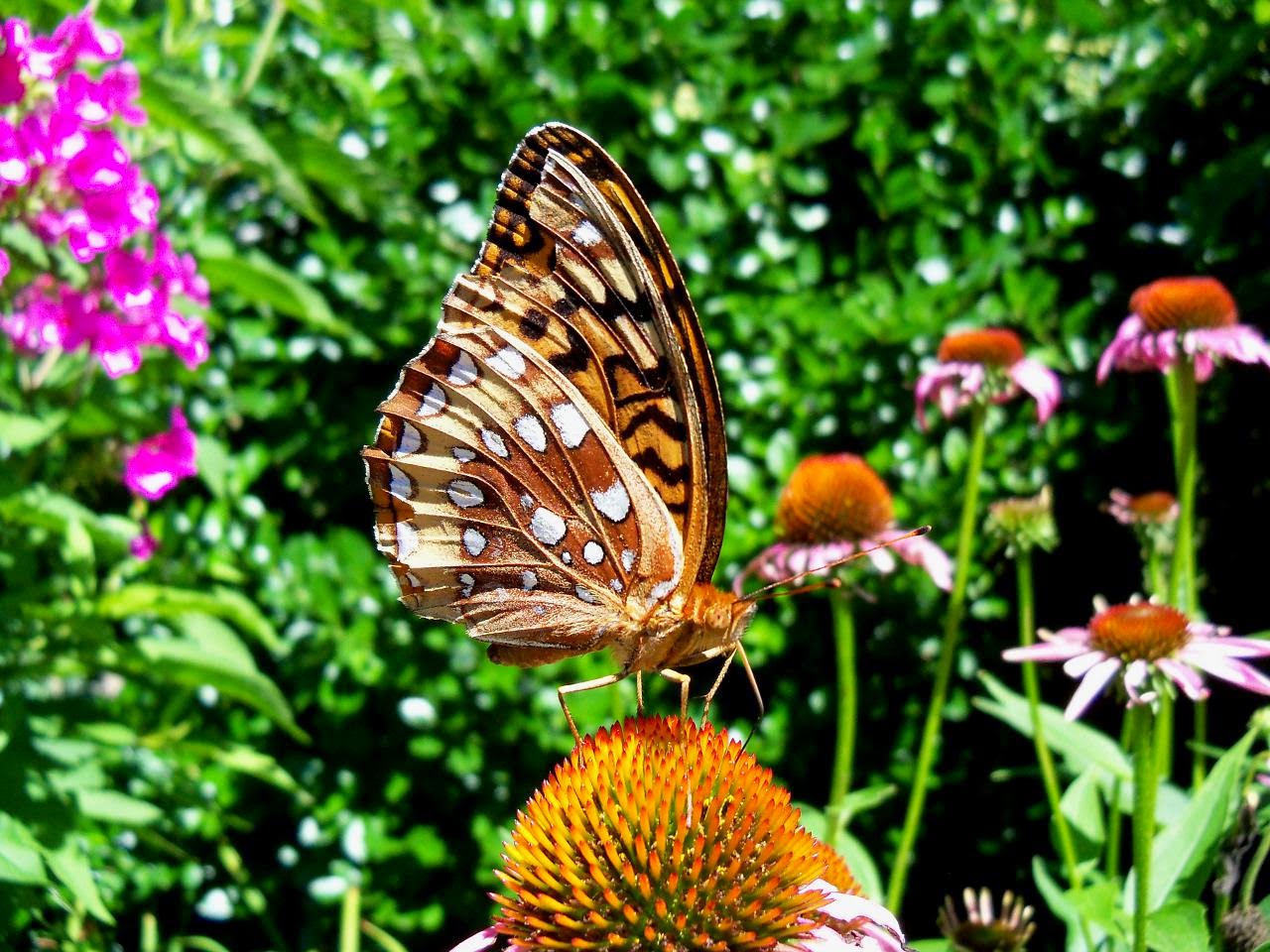 Above, the first of our sunflowers, up in the area we removed the privet hedge. Curiously, new Paulownia seedlings look and grow like sunflowers, except with leaves opposite each other instead of in spirals. 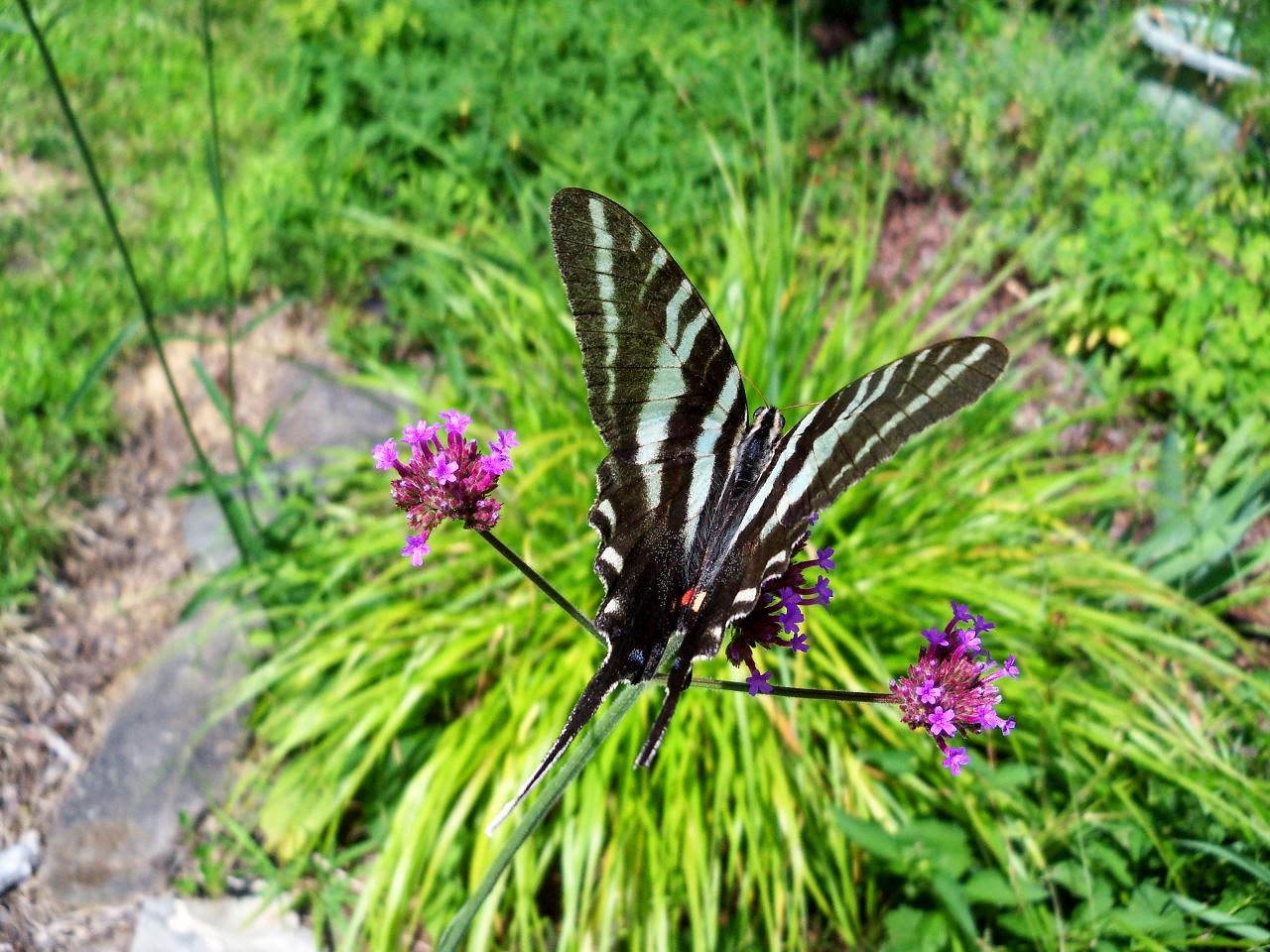 And a Zebra Swallowtail stops at a Brazilian Verbena. 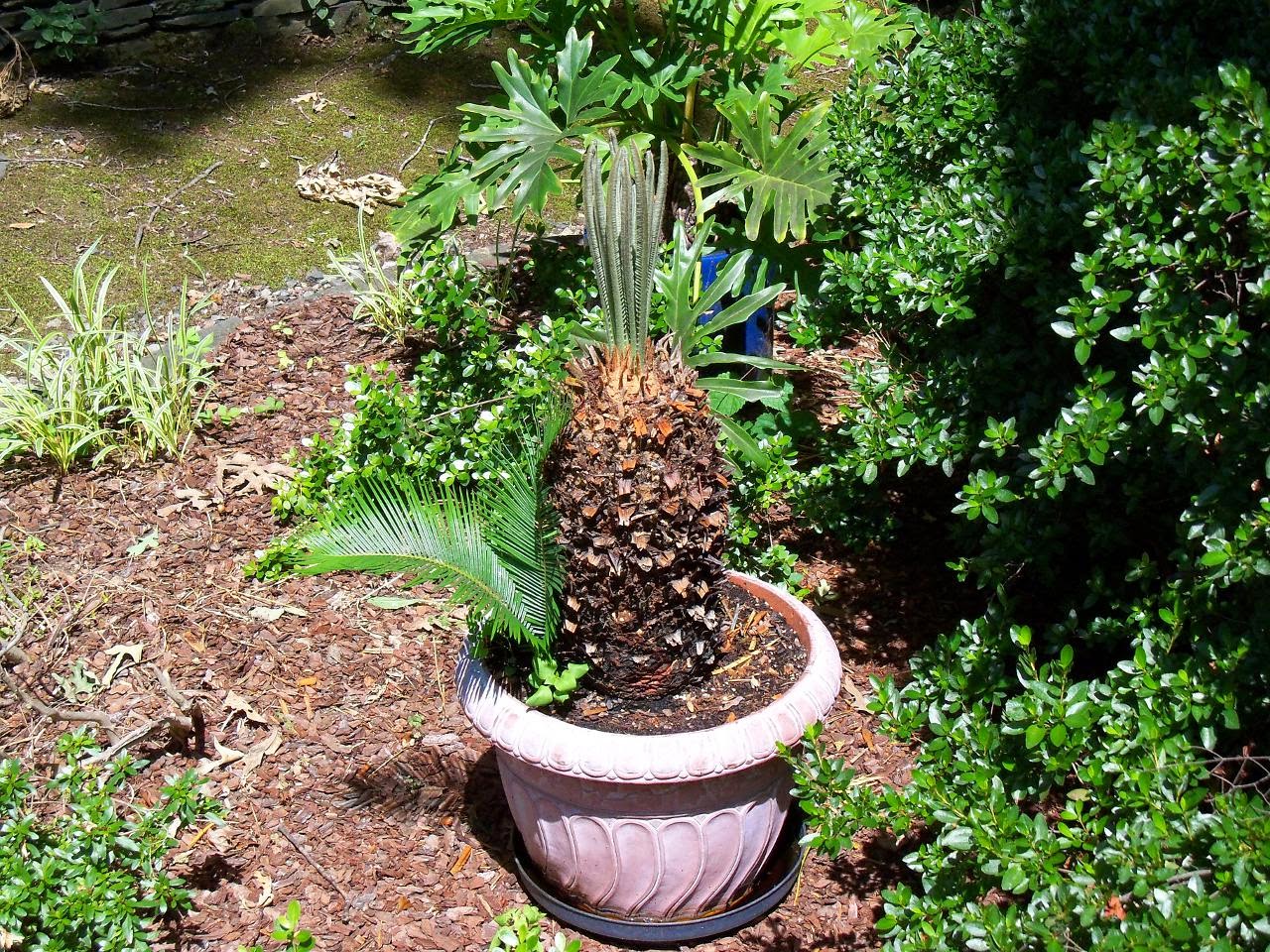 Last fall, when it was time to take in the big King Sago Palm (Cycas revoluta) we decided to repot it because it was leaning badly. We took off most of its leaves (just to make space in the house) and chopped off a major side shoot that had made it ungainly, and potted it. When spring came, and it was time for it to go out, I chopped off all the leaves to force it to resprout a set (otherwise, it's often content to wait a year or two to put on fronds).  It's now resprouting a set of 13 new fronds, which grow 2-3 inches a day before they harden. 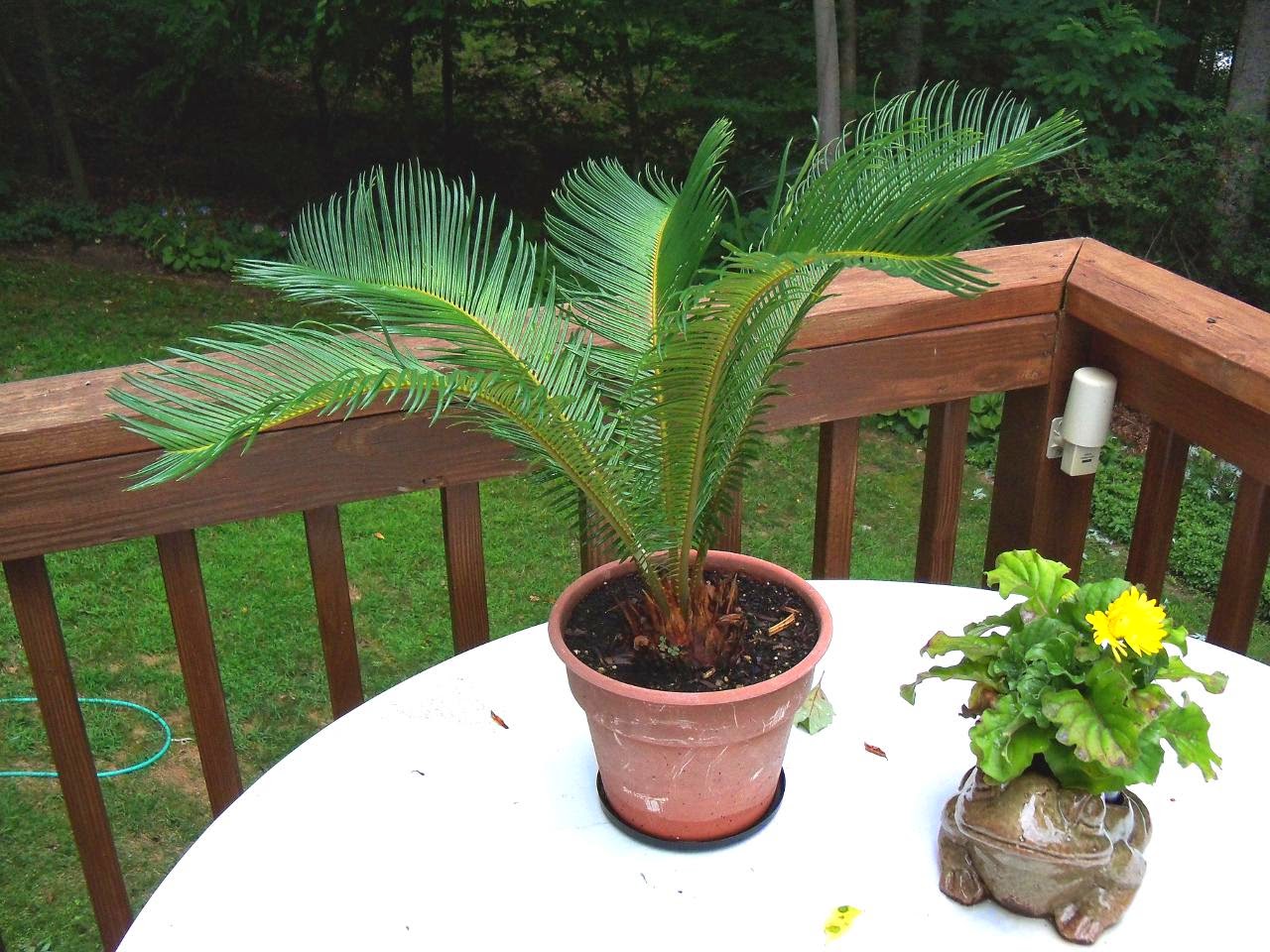 The side shoot, which I had stripped of all fronds when I collected it had sprouted earlier, and now sports a set of 5 new fronds.

We bought the original plant when Alex was in 1st grade, because of a (soon to die) burgeoning interest in dinosaurs, cycads being one of the notable survivors of the Cretaceous. I guess it takes more than a dinosaur killing asteroid strike to kill these. It was about the size of this one back 30 years ago.

We'll probably make him take this little one home sometime.
Posted by Fritz at 1:44 PM