A recent report from Law enforcement suggest that the immigrants perceive the US as either willing to accept or simply too lazy to exclude them, and that the role of violence in their decisions to come to the US is being substantially overstated. From Breitbart: LEAKED BORDER CRISIS INTEL SHREDS NARRATIVE FROM MEDIA AND OBAMA ADMIN


HOUSTON, Texas—An elite, law-enforcement sensitive El Paso Intelligence Center (EPIC) intel report from July 7, 2014 was leaked to Breitbart Texas and reveals that homicide rates in Central America suggest violence is likely not the primary cause of the surge of thousands of unaccompanied minors and incomplete family units illegally entering the United States.

The EPIC report indicates that the belief among the illegal immigrants that they would receive permisos and be allowed to stay was the driving factor in their choices to come to the United States and that the crisis will continue until 'misperceptions' about U.S. immigration benefits were no longer prevalent. The report also states that the migrants cited Univision and other other outlets as having shaped their views on U.S. immigration policy. Another implication of the report is that family members already in the U.S. are encouraging the minors to come and organizing the travel with smugglers.

We know the Preznit has started to say "Don't come" in public, but all his policies and actions still say "The more the merrier!"


The leaked EPIC report discusses the motivational factors of the illegal immigrants in their choice to migrate to the United States:


(U//LES) In late May, the U.S. Border Patrol interviewed unaccompanied children (UAC) and migrant families apprehended in the Rio Grande Valley. Of the 230 total migrants interviewed, 219 cited the primary reason for migrating to the United States was the perception of U.S. immigration laws granting free passes or permisos to UAC and adult female OTMs traveling with minors. Migrants indicated that knowledge of permisos was widespread across Central America due to word of mouth, local, and international media messaging—prompting many to depart for the United States within 30 days of becoming aware of these perceived benefits, according to the same reporting.

And violence, which is the reason given that we must not send these people home:


The EPIC report discusses the lack of correlation between violence rates in Central America and the current border crisis:


(U//LES) EPIC assesses homicide trends and migrant interviews suggest violence is likely not the principal factor driving the increase in UAC migration. While CBP data from early fiscal year 2011 indicates a steady increase in OTM and UAC migration, United Nations Office on Drugs and Crime (UNODC) statistics— within this same timeframe— show a decline in per capita homicide rates in these three countries; El Salvador saw the sharpest decline, followed by Honduras and Guatemala, respectively. 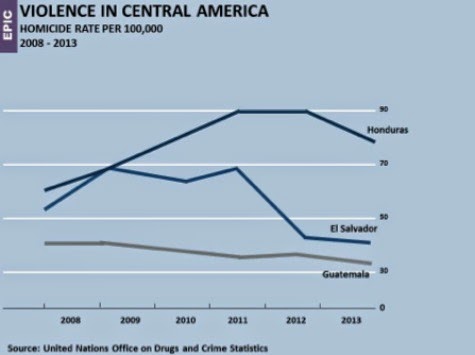 And from NPR, an interview with a friendly, compassionate "coyote:" Who Is Smuggling Immigrant Children Across The Border?


"Everybody says we're the problem, but it's the reverse. The gringos don't want to get their hands dirty. So I bring them the Mexicans and Central Americans to do the dirty work for them," he says, smiling.
. . .
"We cross them in inner tubes. If they're 3 or 4 years old, I have to cross them myself. I can't let them drown," he says
. . .
The Wolf says he used to smuggle adults, but now he specializes in children because it's easier and just as profitable. First, his organization can take a group of Central American children in a bus through Mexico and more easily evade Mexican authorities, who are looking for adult immigrants to deport.

Second, once he crosses the Rio Grande he doesn't have to continue with the group to San Antonio or Houston — the most perilous part of the journey. "Children just give themselves up [to the Border Patrol]," he explains. "Adults have to flee."

Also, from the article the number of unaccompanied minors that have crossed the border since


U.S. authorities claim that human smugglers like El Lobo (the wolf) are at the heart of the current border crisis because they have facilitated the travels of the 57,000 unaccompanied immigrant children who've been apprehended in South Texas since October.

Taking the Preznit's request for a mere $3.7 billion (with a "b") to take care of this we can do the obvious math, and discover that each illegal immigrant child will cost us about $65,000 to take care of, until the next request.  It would be a whole helluva lot cheaper to offer each one $10,000 to stay home. And we wouldn't feed the bureaucratic machine in the US quite so much.
Posted by Fritz at 9:37 AM