The edge of the "Polar Vortex - summer edition part II" has arrived. The temperature and humidity dropped abruptly, down to 64 F and "delightful."

Halbig vs. Sebelius Burwell continues to annoy the liberals. Kevin Williamson at NRO has a long essay on how Obamacare and its open ended nature represent a step backward for the rule of law. 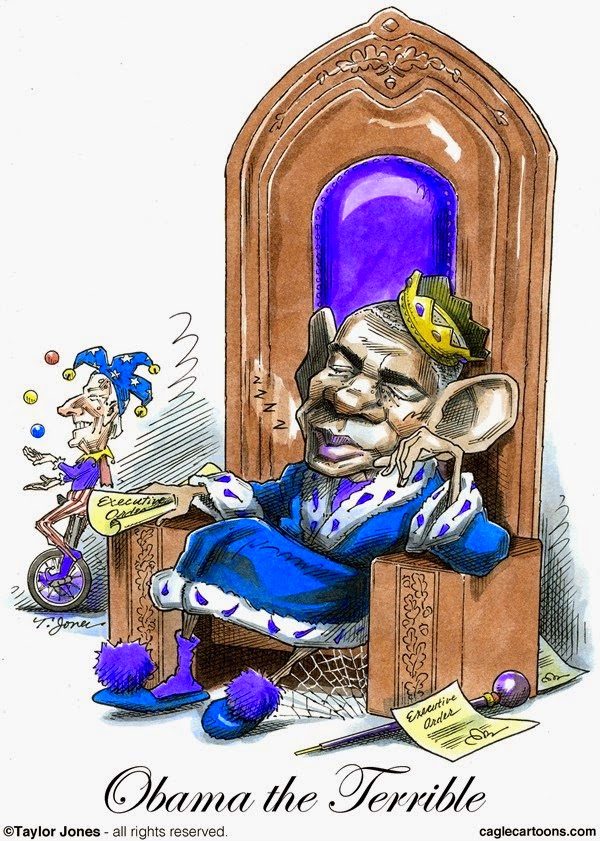 Halbig and Hammurabi: Disdain for the letter of the law is complexly intertwined with the progressive imagination.


. . . Hammurabi never directed his secretary of health and human services to promulgate regulations subsidiary to the code and subject to near-term political necessities — just 282 laws and associated punishments, available for all to see.

Perhaps it is not the case that in the 21st-century United States we can live under something as simple and straightforward as the Code of Hammurabi. But the principle is the same: We write laws down in order that citizens may know what is permissible under the generally promulgated rules of the polity. The writing down of laws was the first step on the road from subject to citizen, and to reverse that is to do violence to more than grammatical propriety, Mr. Klein’s huffery-puffery notwithstanding.

The written law was the first real constraint on the power of kings. An oral tradition is subject to constant on-the-fly revision. Mr. Klein and others of his persuasion would see us return to that primitive state: “Oh, sure, the law says that the IRS can only operate on state-created insurance exchanges, but that isn’t what we” — and who is this we? — “really meant. And besides, things will turn out other than as we desire if we follow the law as written, and who are you, and what is the law, to forbid us our desires?” It is easier to think that way when you believe that you represent a uniquely enlightened point of view, that you are acting in the public interest, and that your political rivals are wicked and ignorant. . .

Another in the same theme by Robert Tracinski at the Federalist. Halbig Shows How We Legislate Now

Do we pass laws any more?

I ask because of the reaction to the federal appeals court decision in Halbig v. Burwell, in which the court enforced what the Affordable Care Act actually says—namely, that federal subsidies for health insurance are available only through state-run exchanges and not through exchanges set up by the federal government.

This is important because the majority of states declined to set up those exchanges—deciding to reject a system and a set of obligations foisted on them by Washington. And ObamaCare is just a big, complicated mechanism for delivering subsidies. Without that, all it does is cancel everyone’s insurance policies and force them into more expensive plans they didn’t want. So you can see why ObamaCare’s defenders really need to keep those subsidies.

So they screamed that the court’s decision was totally ridiculous and implausible—and then up pops a two-year-old video from one of the Affordable Care Act’s architects, Jonathan Gruber, in which he clearly explains that this is exactly what the law says—that denying subsidies on the federal exchanges was a way of pressuring the states to get on board. More recently, Gruber has been telling everyone that this provision was just a typo and was never intended at all. He even claims his 2012 statement was also a mistake, a “speak-o.” Except that he said the same thing on at least one other occasion. So that gives you a good idea of the honesty of ObamaCare’s supporters.

But the big question is: why do they think they can get away with this? Why do they think they can write something into the law, go around for a couple of years explaining that provision to audiences, and then pretend later that it wasn’t there at all and it’s patently ridiculous for anyone to think it ever was?
. . .
No matter how many impenetrable pages of verbiage were contained in the original law, it’s all equivocal and meaningless and can be endlessly reinterpreted by executive bureaucrats, so long as they believe they are working toward the aspiration named in the law’s title: “affordable care.”

That, ladies and gentlemen, is how we legislate now. What used to be a “law” is now just an open-ended grant of power coupled with a vague aspiration. Nothing in between, none of the actual concrete provisions of the law, has any meaning or makes any difference. . . 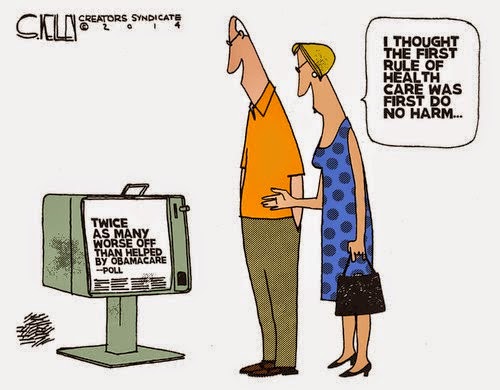 Back to some ordinary "the damn thing isn't working the way we thought it would" schadenfreude.

If you have health insurance on your job, you probably don't give much thought to each year's renewal. But make the same assumption in one of the new health law plans, and it could lead to costly surprises.

Insurance exchange customers who opt for convenience by automatically renewing their coverage for 2015 are likely to receive dated and inaccurate financial aid amounts from the government, say industry officials, advocates and other experts.

If those amounts are too low, consumers could get sticker shock over their new premiums. Too high, and they'll owe the tax man later. 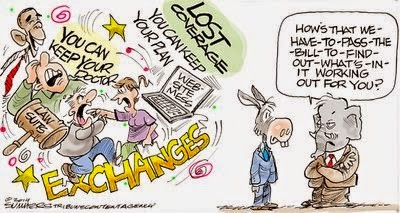 Because all the working parts of a 2000 page plan written by one party and rammed through Congress without debate can be expected to work smoothly.

With half a year under its belt, how is Obamacare being experienced: New health plans' limitations anger enrollees


Nancy Pippenger and Marcia Perez live thousands of miles apart but have the same complaint: Doctors who treated them last year won't take their insurance now, even though they haven't changed insurers.
"They said, 'We take the old plan, but not the new one,' " says Perez, an attorney in Palo Alto, Calif.

In Plymouth, Ind., Pippenger got similar news from her longtime orthopedic surgeon, so she shelled out $300 from her own pocket to see him.

Both women unwittingly enrolled in policies with limited networks of doctors and hospitals that provide little or no payment for care outside those networks. Such plans existed before the health law, but with its expansion of insurance, they are covering more people — and some are shrinking enrollees' options further than before. The policies' limitations have come as a surprise to some enrollees used to broader job-based coverage or to plans they held before the law took effect.

"It's totally different," said Pippenger, 57, whose new Anthem Blue Cross plan doesn't pay for any care outside its network, although the job-based Anthem plan she had last year did cover some of those costs. "Now I can't find a doctor."

That's because, under Obamacare, the role people who already had health insurance was to take a benefit cut to help pay for the "subsidies" to those who didn't.  Welcome to the omelette.
Posted by Fritz at 8:54 AM