So Now We Know What Happened to the Hard Drives

According to a government audit, IRS Agents ‘Accidentally’ Discharged Guns 11 Times between 2009 and 2011. Some of those weapons discharges resulted in property damage or personal injury, claimed the report. In fact, agents accidentally fired their guns more times than they did intentionally, said the Treasury Inspector General for Tax Administration. 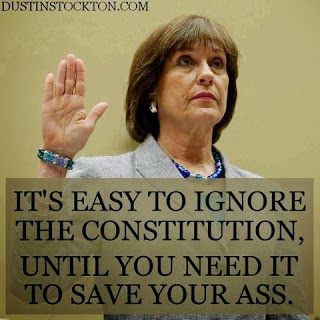 and as long as we're on the topic of the allegedly non-partisan IRS. . .  Emails reveal IRS official Lois Lerner called conservatives 'crazies' and 'a**holes'


Former senior IRS official Lois Lerner had deeply held political biases while she was in a position of authority, according to Republican lawmakers who unveiled emails on Wednesday showing her referring to conservatives as 'crazies' and 'a**holes.'

Michigan Rep. Dave Camp, who chairs the powerful House Ways and Means Committee, wrote to Attorney General Eric Holder to demand what he called 'a serious investigation' – something he said has been lacking.

Camp wants Holder to appoint an outside special counsel to probe the culture of the IRS and explain why hundreds of conservative groups were subjected to intrusive questioning and years-long delays when they applied for nonprofit tax benefits – steps that were not taken against liberal organizations.

He told the attorney general on Wednesday that the newly disclosed email correspondence 'shows Ms. Lerner's mistreatment of conservative groups was driven by her personal hostility toward conservatives.'
. . .
'Overheard some ladies talking about American[s] today,' Lerner wrote. 'According to them we've bankrupted ourselves and a[re] through. We'll never be able to pay off our debt and are going down the tubes.'

That certainly raises my opinion of English ladies. Except for Lucy Pinder, of course, who I already hold in high esteem.

'They don't seem to see that they can't afford to keep up their welfare state either,' she wrote. 'Strange.'

'Well, you should hear the whacko wing of the GOP,' the person replied. 'The US is through; too many foreigners sucking the teat; time to hunker down, buy ammo and food, and prepare for the end.'

'The right wing radio shows are scary to listen to.'

'Great,' Lerner wrote back. 'Maybe we are through if there are that many a**holes.'
'And I'm talking about the hosts of the shows,' came the reply. 'The callers are rabid.'

In the final message of the exchange, Lerner wrote that 'we don't need to worry about [illegal] alien terrorists. It's our own crazies that will take us down.'

Lois Lerner, of course, is entitled to her own opinion.  However, she was not entitled to act on them as an agent of the Federal government, by attempting to to squash the electoral success of the people she opposed and disdained. It takes a certain charming naivete to put this in an email on a government system. As Insty quips, if the emails they're admitting to are this bad, imagine what the ones they're withholding are like.

Time for my "Modest Proposal" to reform the IRS and similar federal agencies impregnated with agents for the Democratic Party.  Affirmative action. Fire half of them, and replace them with Republican activists, and let the two sides fight it out.
Posted by Fritz at 6:57 PM