Two different appeals courts came down with decisions on the legality of subsidies being given to people who sign up on Obamacare through the federal exchanges. As conservatives thought they might, and liberals feared, in Halbig vs. Sebelius Burwell the D.C. Circuit Court decided that the law meant what it said, and that only people who signed up for Obamacare through state exchanges were eligible for subsides:

Obamacare supporters are enraged. The decision in Halbig v. Burwell, which invalidated the federal government’s ability to provide subsidies for those Americans who purchased insurance through a federal health insurance exchange, could mean a major increase in premium rates for more than half of the 8 million who enrolled in ACA plans.

The appeals court ruled that, as written, only those who purchased insurance through state-level exchanges can access federal financial support. “That would invalidate an Internal Revenue Service regulation that tried to sort out confusing wording in the law by concluding that Congress intended for consumers in all 50 states to have subsidized coverage,” the Associated Press reported. 36 states declined to establish their own exchanges, preferring instead to use the federal exchange.

The law’s design was no accident. The ACA was constructed with the aim of encouraging states to establish their own exchanges. Even Vox.com accurately describes the incentive structure in place: “If a state set up its own exchange, its citizens would receive subsidies. If the state didn’t, its citizens wouldn’t.”

Up to 5 million subsidized plans are at risk.

Au contraire, decided the 4th Circuit court, the same day. They couldn't make head nor tails out of the same words themselves, and so decided the tie goes to the IRS, who wrote the regulations that govern Obamacare: 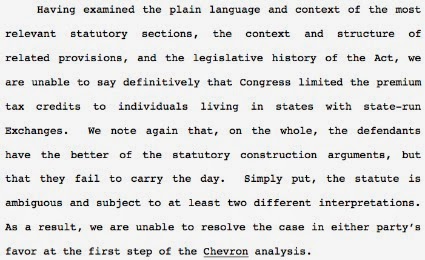 
Senate Democrats are hoping their use of the “nuclear option” to end a Republican blockade of circuit court nominees last year will help overturn a 2-1 appeals court ruling with the potential to gut Obamacare tax subsidies for millions.

Senate Majority Leader Harry Reid, D-Nev., blasted the court’s ruling that Congress only wanted to provide tax subsidies in states with their own exchanges an “absurd” move by “two activist Republican judges.”

The administration plans to appeal the ruling to the full D.C. Circuit Court of Appeals, which now has more Democrat-appointed judges after the nuclear option blew up GOP attempts to filibuster Obama’s nominees.

Asked by reporters if his decision to employ the nuclear option to fill the circuit was vindicated, Reid said based on “simple math, you bet.”

Needless to say, the matter is not settled, and decisions by the full courts before proceeding to the Supreme Court are likely. Stay tuned.

In other Obamacare Schadenfreude news, the ungrateful plebes are still whining about the lousy Obamacare coverage:


Anger over limited choice of doctors and hospitals in Obamacare plans is prompting some states to require broader networks — and boiling up as yet another election year headache for the health law.

Americans for Prosperity is hitting on these “narrow networks” against Democrats such as Sen. Jeanne Shaheen of New Hampshire, whose GOP opponent Scott Brown has made the health law a centerpiece of his campaign to unseat her. And Republicans have highlighted access challenges as another broken promise from a president who assured Americans they could keep their doctor.

It’s not just a political problem. It’s a policy conundrum. Narrow networks help contain health care costs. If state or federal regulators — or politicians — force insurers to expand the range of providers, premiums could spike. And that could create a whole new wave of political and affordability problems that can shape perceptions of Obamacare.

Here’s the dilemma: People hate being told they can’t go to the doctor of their choice. But many hate higher premiums more. Tightening up the network is one of insurers’ best tools to keep costs down.

To paraphrase Michelle Obama, "Just shut up and eat your vegetables. It's for your own good."

But what if you do want an Obamacare plan, and think you might not be eligible for a subsidized plan? Don't worry, it's easy to fake an application:


In undercover tests of the new federal health insurance marketplace, government investigators have been able to procure health plans and federal subsidies for fake applicants with fictitious documents, according to findings that will be disclosed to lawmakers Wednesday.

The results of the inquiry by the Government Accountability Office are evidence of still-imperfect work by specialists intended to assist new insurance customers as well as government contractors hired to verify that coverage and subsidies are legitimate. The GAO also pointed to flaws that linger in the marketplace’s Web site, HealthCare.gov.

According to testimony to be delivered before a House Ways and Means subcommittee, undercover GAO investigators tried to obtain health plans for a dozen fictitious applicants online or by phone, using invalid or missing Social Security numbers or inaccurate citizenship information.

All but one of the fake applicants ended up getting subsidized coverage — and have kept it. In one instance, an application was denied but then approved on a second try. In six other attempts to sign up fake applicants via in-person assisters, just one assister accurately told an investigator that the applicant’s income was too high for a subsidy.