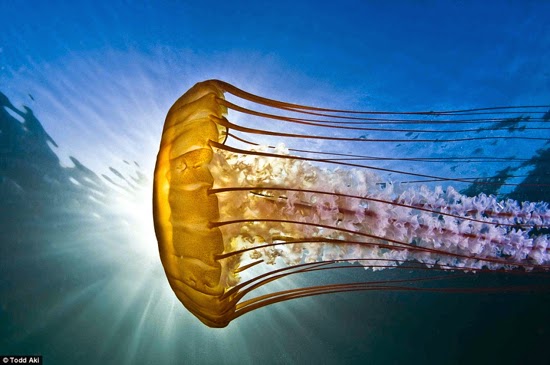 I noted a while ago that the highly annoying Sea Nettles common to most of Chesapeake Bay in summer (we think of them as arriving by July 4, if not earlier) appear to be absent from our corner of the Bay. It seems that the people whose job is to keep track of such things have noticed it too.

Missing Jellyfish in the Chesapeake Bay


Jacqueline Tay, a student at the University of Maryland Horn Point Laboratory in Cambridge, has been studying the local sea nettle species, chrysaora quinquecirrha, for several years. She said when she started, sea nettles were a common sight in the river.

"Every time you would go out there would be anywhere from 30 to 300 jellyfish in a small area. And it's been low since then," Tay said.

And when sea nettles are low, it usually comes with a price.

"They eat zooplankton, they eat copopods, the same food that fish eat. They also eat another jellyfish in the bay called the ctenophore. The prevailing thought is that if there aren't many sea nettles, then there are a lot of ctenophores. And that's a bad thing for the ecosystem." explained Tay.

Bad because the ctenophores eat considerably more zooplankton, leaving less food for the fish. But good news, they are nowhere to be found either.

While it may sound like a crisis, the head of the jellyfish program at Horn Point, Dr. Raleigh Hood, thinks it's just a cycle.
. . .
There are a few theories on where the jellyfish are. Some hypothesize the cold spring killed off a large portion of the jellyfish, and some think that perhaps they are farther north. The scientists are working, as they always have, to find out more about this mysterious species that seems to be missing in the Chesapeake bay.