Obamacare has been largely out of the news for sometime, as no deadline looms yet, and as immigrants rush the borders, the Mideast explodes (again, ho hum), and planes unexpectedly fall out of the sky. Nevertheless, Obamacare Schadenfreude continues to creep along inside the body politic, like a case of septicemia or necrotizing fasciitis.

The next time some democrat tells you Obamacare is working, send him this to show how flexible "working" really is: Obamacare Misses Its Target on the Uninsured by Half

In March 2010, Obamacare was about to be voted upon by the House of Representatives, and the Democrats were in the process of deciding whether to ignore public opinion at their peril. At that time, the Congressional Budget Office (CBO) projected that Obamacare would cost $938 billion over a decade and would reduce the number of uninsured people by 19 million as of 2014 (with a reduction of 1 million prior to 2014 and 18 million in 2014 alone). Unimpressed, the American people overwhelmingly opposed the intrusive overhaul — with 20 of 21 polls taken that month showing it to be unpopular, most of them by double digits. The Democrats willfully passed Obamacare anyway and lost 63 House seats that November.
. . .
In February of this year, the CBO projected that Obamacare would reduce the number of uninsured by 13 million as of 2014. In April, the CBO had seen enough of the Obama administration’s skillful rollout of Obamacare to reduce that estimate to 12 million.

Now the Urban Institute finds that Obamacare has actually reduced the number of uninsured adults by 8 million since the rollout began last fall. (Gallup shows a similar number.) That’s far short of the number of newly insured that the CBO projected in April of this year, in February of this year, or in 2012 — and it’s less than half the tally the American people were told Obamacare would hit when they opposed it in 2010.

Yet Paul Krugman says that “health reform is — gasp! — working.” Only in Washington could something that fails to hit even half of its original target be considered a gasp-inducing success. No wonder Obamacare is every bit as unpopular now as it was before the party that passed it took its initial Obamacare-induced “shellacking” four years ago.

Unless by "working" you mean destroying the previous health care system. If that was the goal, and there's plenty of evidence it was, it working.

And now, the Sun King allows another exception to his signature achievement, because it's working too well: The Obama Admin Just Exempted US Territories From Obamacare


The Obama administration issued yet another waiver to get out of Obamacare — for all the U.S. territories.

The exemption, posted Thursday on a Department of Health and Human Services website, frees U.S. territories from a host of Obamacare regulations on health insurance markets. The territories already weren’t subject to much of the health care law — the individual mandate doesn’t apply to the territories and premium subsidies aren’t available.

What did apply were a host of regulations on the health insurance markets operating in the territories. Obamacare’s rules for insurance companies — providing mandated health benefits to all customers, limits on insurer profits, and guaranteed coverage for those with pre-existing conditions — all force insurers to take a hit, but in the territories, the sweeteners that make Obamacare a great deal for insurance companies in the states don’t apply.

The individual mandate and premium subsidies were supposed to bring healthy and young customers into the insurance market. Even in the states, that’s not working nearly as well as the Obama administration had hoped. But without either provisions, the insurance markets in the territories were tanking due to the influx of sick patients and the new benefits insurers were required to provide.

The U.S. territories have been pleading with the Obama administration to exempt them from the regulations, but HHS officials had refused until now. “HHS is not authorized to choose which provisions…might apply to the territories,” top HHS official Gary Cohen wrote last year, The Washington Post reported.

Now HHS believes it has the authority after all. The Public Health Service Act’s definition of the term “state” has led HHS to belatedly determine that most of Obamacare’s regulations don’t apply to the territories.

And I'm sure this will shock you: Company That ‘Saved’ HealthCare.gov Faces Questions of Cronyism 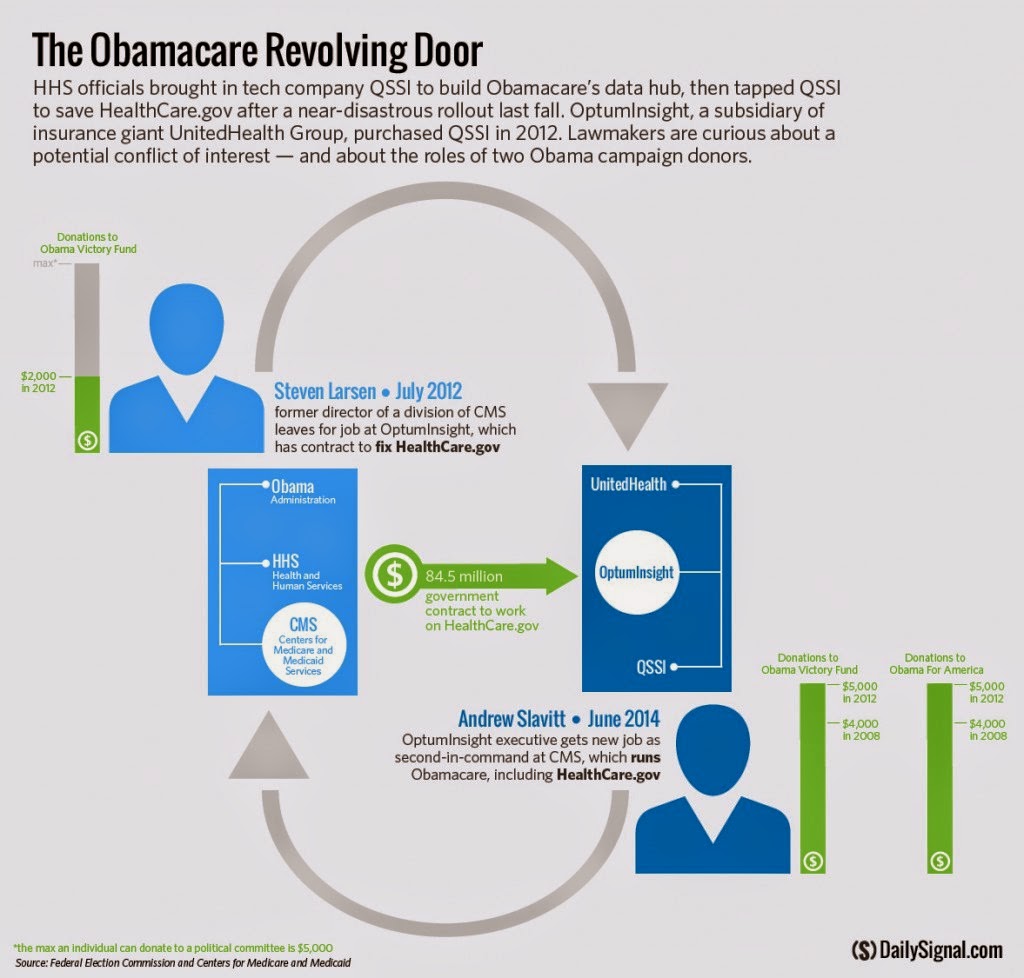 Jarred by the defect-riddled rollout of the Obamacare website, Obama administration officials signed up a technology company to rid HealthCare.gov of its bugs.

Now, though, congressional Republicans are scrutinizing that outfit for a potential conflict of interest because its sister company, UnitedHealthcare, is among insurance companies selling plans to Americans through online marketplaces, or “exchanges.”
“If I was a competitor, I would be extremely concerned about this company having access to confidential information that we’ve had to give to the government,” Heritage Foundation legal scholar Hans von Spakovsky told The Daily Signal.

Quality Software Systems Inc., or QSSI, is the tech firm the Department of Health and Human Services picked in October 2013 to straighten out HealthCare.gov.
. . .
In September 2012, two months before President Obama’s re-election, UnitedHealth Group acquired QSSI through a subsidiary, OptumInsight, in a deal consummated with little fanfare. UnitedHealth Group is also the parent of UnitedHealthcare, which offers plans on the exchanges set up by the Affordable Care Act.

As The Washington Post noted, neither UnitedHealth nor OptumInsight put out press releases announcing the purchase—and because the deal was relatively small, it didn’t require a filing with the Securities and Exchange Commission.

The only public evidence of the acquisition appeared on the website for Jenner & Block, the law firm that represented QSSI in the deal.

Afterward, a group of Republican lawmakers sent letters to UnitedHealth and HHS asking for further information on why QSSI got the $84.5 million government contract to work on the federal data hub.

I guess an additional sign that it's working is that it is supporting the administration's supporters.
Posted by Fritz at 8:48 AM