The Halbig and 4th Circuit decisions have Obamacare back in the news.

No, Halbig Did Not Gut Obamacare Because Of A “Drafting Error”


The panel that issued yesterday’s Halbigdecision ruled that the text of the Affordable Care Act, also known as Obamacare, was unambiguous: subsidies in the form of tax credits could only be provided to offset the costs of plans purchased via a state exchange. Obamacare’s supporters immediately reacted with outrage, but they couldn’t quite settle on what, exactly, was outrageous. Some argued that the text of the law clearly permitted subsidies to flow to those who purchased plans on the federal exchange—this was the argument offered by the government in court. Others argued that while the text didn’t technically permit those subsidies, that was clearly the intent of the the law, and any textual omission was surely due to a “drafting error.”

Let’s take a step back to see how plausible that explanation is. There are two types of exchanges: state-established, and federally established. The statutory authority for state-based exchanges comes in section 1311 of Obamacare. The statutory authority for a federal exchange in the event that a state chose not to establish one comes from section 1321(c) of Obamacare. Right off the bat, we have two discrete sections pertaining to two discrete types of health exchange. Was that a “drafting error”?

Then we have the specific construction of section 1321(c), which allows for the creation of a federal exchange. Nowhere does this section say that an exchange created under its authority will have the same treatment as a state-based exchange created under section 1311. At no point does it say that section 1321 plans are equivalent. Why, it’s almost as though the exchanges and the plans offered by them were not intended to receive the same treatment. Was that another “drafting error”?

Most important, we have the sections of the law providing for tax credits to help offset the cost of Obamacare’s health care plans: sections 1401, 1402, 1411, 1412, 1413, 1414, and 1415. And how do those sections establish authority to provide those tax credits? Why, they specifically state ten separate times that tax credits are available to offset the costs of state health exchange plans authorized by section 1311. And how many times are section 1321 federal exchange plans mentioned? Zero. Was that yet another “drafting error”?

Please don't confuse the liberals with facts. It just makes them angrier. Especially the judges.

A Tale of Two Circuits: Obamacare is either on life support or in robust health


. . . At the heart of the conflict is a fundamentally different view of the role not just of federal courts but also of federal agencies. I have long been a critic of the rise of a type of fourth branch within our system. The Framers created a tripartite system based on three equal branches. The interrelation of the branches guarantees that no branch could govern alone and protects individual liberty by from the concentration of power in any one branch.

We now have a massive system of 15 departments, 69 agencies and 383 nonmilitary sub-agencies with almost three million employees. Citizens today are ten times more likely to be the subject of an agency court ruling than a federal court ruling. The vast majority of “laws” in this country are actually regulations promulgated by agencies, which tend to be practically insulated and removed from most citizens
. . .
Regardless of the merits of the statutory debate over the ACA, the question comes down to who should make such decisions. For my part, I agree with the change but I disagree with the unilateral means that the President used to secure it. President Obama has pledged to “go it alone” in circumventing opposition in Congress. The Fourth Circuit decision will certainly help him fulfill that pledge. The result is that our model of governance is changing not by any vote of the public but by these insular acts of institutional acquiescence.


Remember this odd story from the other day?

Looking for a place where Obamacare doesn’t exist? Try moving to the U.S. Territories, where the Obama administration just provided a pretty big waiver from the law’s major coverage provisions.


The Affordable Care Act’s design dealt a pretty big problem to the territories. It required insurers there to comply with the law’s major market reforms — guaranteed coverage, mandated benefits, limits on profits, etc. — without requiring residents to get coverage or providing subsidies to help them afford coverage. The territories — Puerto Rico, the U.S. Virgin Islands, American Samoa, Guam and the Northern Mariana Islands — have been warning for years that would destroy their insurance markets. The individual mandate and the subsidies are the major ways the ACA tries to bring healthy people into the individual insurance market to balance out sick patients who can no longer be denied coverage.
That was until Wednesday, when the Obama administration told the territories that the coverage requirements actually don’t apply to them. The exemption was posted on a Health and Human Services Web site on Thursday.

This seemed a little puzzling . . . until you read the Halbig decision. Then everything comes into focus: they were sacrificing coverage in the territories to establish a litigation position ahead of the decision.

Here it is in a nutshell. The government argued that the law provided a “three-legged stool” — and the three legs were: (1) “guaranteed issue” (where insurance companies must issue coverage to those with pre-existing conditions); (2) the mandate; and (3) subsidies. The government said that you can’t remove any of these legs without the stool collapsing; therefore the intent to have broad-based subsidies is clear. So, for example, you can’t possibly have a situation where you have “guaranteed issue” unless you have an individual mandate, which establishes a broad base of customers, which makes the economics work for the insurance companies.

The Halbig court replies: sure you can, apparently — because that’s what you do in the territories:


Yet the supposedly unthinkable scenario the government and dissent describe—one in which insurers in states with federal Exchanges remain subject to the community rating and guaranteed issue requirements but lack a broad base of healthy customers to stabilize prices and avoid adverse selection—is exactly what the ACA enacts in such federal territories as the Northern Mariana Islands, where the Act imposes guaranteed issue and community rating requirements without an individual mandate. . . . This combination, predictably, has thrown individual insurance markets in the territories into turmoil. . . . But HHS has nevertheless refused to exempt the territories from the guaranteed issue and community rating requirements, recognizing that, “[h]owever meritorious” the reasons for doing so might be, “HHS is not authorized to choose which provisions of the [ACA] might apply to the territories.”

My guess is that the Government knew that the court was going to be making this argument, somehow — and the Government wanted to be able to tell the Supreme Court (or en banc D.C. Circuit) that it had, in fact, exempted the territories. They wanted not to seem reactive to the Halbig decision — so they made sure to make the announcement before the decision came out.

My favorite part is the quote from HHS: “HHS is not authorized to choose which provisions of the [ACA] might apply to the territories.” Right before they did exactly that.

When the Government trumpets that exemption before future courts, the lawyer for Halbig et al. had better be ready with that quote.

Are lawyers really that devious? Does a bear shit in the woods?

When you've lost Ted Turner... CNN Poll: Twice As Many Americans Were Hurt By Obamacare Than Helped 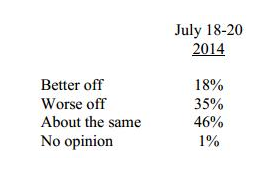 As we've seen in the other polling linked above, a plurality of Americans say they haven't been impacted too much by the new law -- yet, at least. As I've said in the past, I generally fall into this category, as the "only" effect I've felt is a monthly premium increase of nearly $100. But of those consumer who have been affected, they break two-to-one into the "worse off" camp. Obamacare is helping some people; mostly Americans with preexisting conditions and those who are eligible for very generous subsidies. But it's hurting far more people. And a substantial majority oppose the law. Obamacare was pitched as a win/win for everyone, with no trade-offs and no losers. That has not been the case. Indeed, Politico isshowcasing one class of Obamacare losers, who've encountered "access shock" -- a phenomenon we've been tracking for quite some time. . .


Andrew Slavitt, a former executive at the technology company tasked with saving HealthCare.gov and current second-in-command at the Centers for Medicare and Medicaid Services, was granted an ethics waiver by the Department of Health and Human Services to begin working with his former company immediately.

The waiver was granted despite Republican lawmakers’ concerns about Slavitt’s potential conflict of interest. The Daily Signal revealed those concerns in a story yesterday.

Slavitt, a former OptumInsight/QSSI group vice president, left the company last month to work as the principal deputy administrator at the Centers for Medicare and Medicaid Services, which runs Obamacare and HealthCare.gov. His post makes him the No. 2 at the agency under CMS Administrator Marilyn Tavenner.